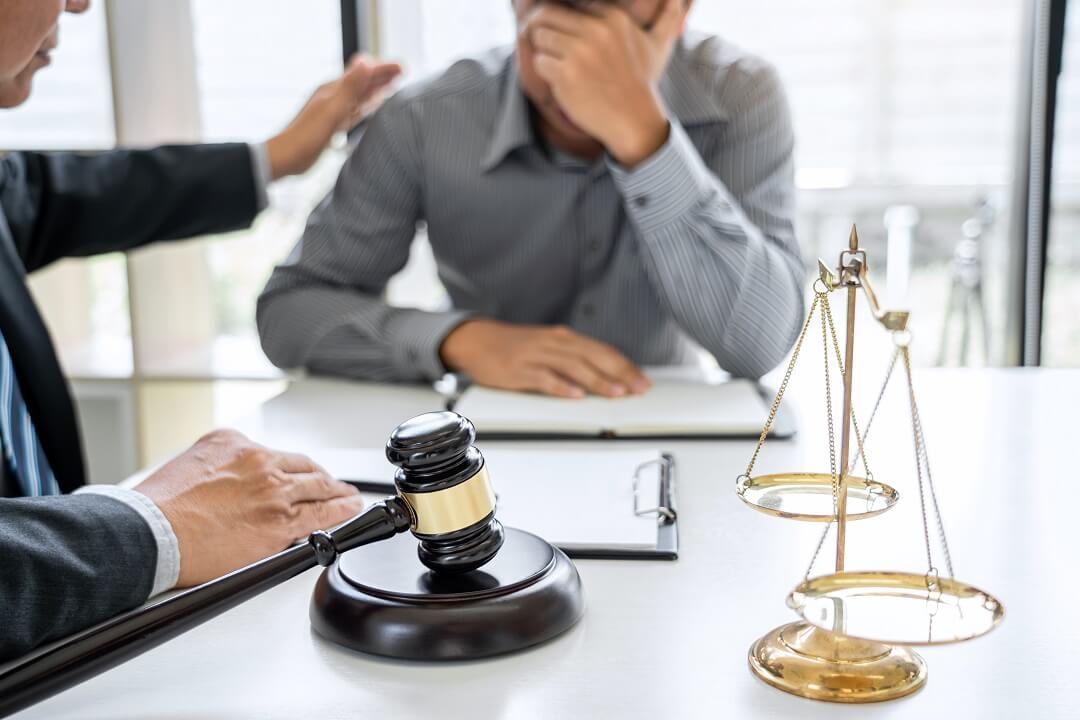 Fight-or-flight is the immediate response of any human after encountering a mentally or physically terrifying incident. In some instances, we tend to flee. It’s a natural human instinct to escape from blame, dispute, and penalty. What if it happens at an accident scene? That legally turns out to be a hit-and-run accident.

A hit and run is described as an incident in which the “driver of a vehicle intentionally fails to stop to give the wounded party, a witness, or law enforcement agents his identity, license number, and other information as required by statute.” Hit and run may also include hitting fixed objects like a mailbox, and in a few states applicable to hitting animals too.

As per the data from the National Highway Traffic Safety Administration (NHTSA) Fatality Analysis Reporting System (FARS), in 2016, there were 1,980 hit and run accidents reported in the US. This has stemmed a massive 2,049 fatalities. Every 43 seconds, a hit and run accident is reported in the United States. Not just that, there is a substantial 60% rise in the cases from 2009 to 2016, says American Automobile Association (AAA Foundation) for Traffic Safety.

See the below image to know the number of hit-and-run cases in the U.S. 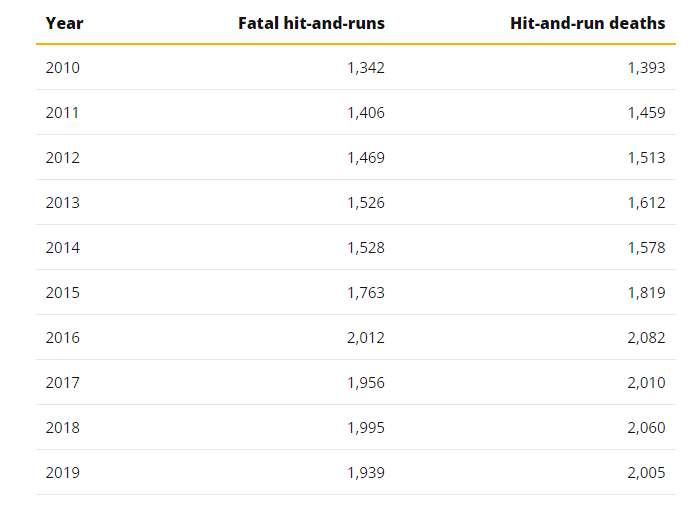 Nevertheless, if you are a victim or at fault, a car crash will always be horrific and creates havoc. A hit-and-run accident would be more devastating for the victim, leaving him helpless, confused, and in pain.  Being so common within the US, thousands of hit and run claims are raised every year.

Before analyzing the benefits of a car accident attorney in your hit and run claim, let’s know some basic things regarding such accidents.

Penalties for a hit and run felony

Most states impose fines on the at-fault in a felony between $5,000 and $20,000, and there are chances for internment for the hit and run. The imprisonment can go up to 15 years.

Even in a misdemeanor hit and run, the at-fault has to pay up to $5,000 and face one-year jail term.

Never think that a fine and jail term is the only penalty you have to encounter in a hit and run accident. Your driving license may be suspended or revoked for six months to three years.

Depending on the nature of the accident, and the laws of the state you reside in, sometimes, the revocation of your license may be extended to your lifetime.

In Alabama, causing injury or death of an individual will be considered a Class C felony. The at-fault has to pay a fine of up to $15,000, and the jail term will vary from one year to ten years, depending on the nature and consequences of the accident.

Colorado imposes a Class 1 misdemeanor offense as the penalty for injury, and the driver’s license will be revoked. Causing serious injury will be considered a Class 4 felony with an imprisonment of 2 to 3 years. Along with revocation of license, sometimes, the at-fault has to pay $500,000 in fines.

Causing death will be considered a Class 3 felony, and 4 to 12 years of jail term can be imposed. Along with license revocation, the fine threshold will go up to $750,000.

In the case of a civil lawsuit, the at-fault is ordered to pay punitive damages as a punishment for his recklessness. Your car insurance will not cover your punitive damages. You will be destined to pay that out of your pocket.

The states like Alabama and Arizona even allow treble damages, which means the plaintiff will get triple the amount of punitive damages awarded by the jury. The treble damages are allowed as the hit and run accident is considered the most egregious or reckless act.

Have you understood how severe the penalties are for the hit and run accident? How to protect yourself in a hit and run claim? You should have the assistance of an experienced attorney to steer forward your claim.

Hit and run laws fluctuate from state to state. The majority of the states consider hit and run accidents as misdemeanors or felonies. It depends on the consequences of the hit and run. Penalty to the defendants may include fines and jail time.

In New York, a hit and run accident resulting in property damage is considered a traffic infraction. A fine of up to $250 and/or imprisonment for up to 15 days would be given to the defendant. When the accident ends up with a serious injury, it is considered a Class E felony. The defendant would be charged a fine of $1,000-$2,500 and imprisonment for not more than 4 years. If the hit and run results in the death of the victim, it is a Class D felony. A fine of $1,000-$2,500 and jail time for not more than 7 years would be given to the defendant.

You may have doubts, setbacks, and worries regarding the accident and the likelihood of a claim. The claim possibility would rely on the accident, injuries, and the severity of your damages. A car accident attorney mastered in hit and run accidents would know-it-all. Approaching the attorney would make the claiming process more effective. He would evaluate your case and let you know the possibilities of a claim.

Even a tiny piece of evidence is weighty for him

­When the person who hits you flees the scene immediately, gathering evidence enough to support a claim would be a herculean task. You may not be able to get any information about the running driver in the accident spot. This may often reflect in the claim.

A car accident attorney would be skilled enough to gather evidence to strengthen your claim. He would dig it out from the police report. The other vehicle’s make, model, and color, the direction it headed after the crash, the location of the accident, everything matters in a hit and run charge. Footage from surveillance cameras and traffic cameras may become crucial in providing evidence.

He would make the paper works a breeze for you

Unlike other personal injury claims, attaining compensation from the defendant is a little bit tricky in a hit and run claim. It is not possible to identify the person who caused the harm unless some evidence indicates the running driver.

When the running driver is identified, the claim moves ahead like other accident claims. Through the insurance carrier of the defendant, you may seek compensation for the damages. What if the liable person is not found? You have to proceed with your insurance claims. If you carry uninsured motorist (UM) insurance, it will help. However, getting the claim from your insurance company would not be gentle be deal with.

Pursuing the claim with the help of a car accident lawyer would save you from the thorny paper works process. Each state would have a different statute of limitations within which the claim needs to be filed. The attorney would help in filing the claim on the dot.

He knows how to entangle the defendant’s arguments

Like any other personal injury claim, the insurance companies would come up with all the possible tactics to minimize the claim. Even if the running driver is identified, you have to battle all the defense arguments to win the claim. The common defense points argued in a hit and run charge are.

Expertise is required to slice these defense arguments and substantiate the claim. For a skilled car accident attorney, it would be a smooth sail.

He would help you walk off with a deserving payoff

Winning the claim would never compensate for the physical injuries and the emotional trauma you sustain. However, compensation may help with your medical expenses and would also help you to have a better living. No doubt, hiring a car accident attorney would help you get the most out of the compensation. Hit and run claims may help you obtain both economic and non-economic damages. Economic damages cover all the current and future medical expenses related to the mishap. It includes rehabilitation costs, medical bills, ambulance charges, etc. Non-Economic damages may cover your emotional distress, loss of enjoyment of activities, worsening of prior injuries, etc.

On August 14, 2022, three men were killed, and another was injured in a hit-and-run crash on the city’s South Side. The horrific crash at 70th and Jeffery was recorded on camera and shared by ABC7 as a group of men appeared to fight in the middle of the street. The man who hit the youngsters fled the scene.

The 34-year old Tavis Dunbar, who was the driver who fled the scene after killing three, finally had turned out to the police recently with his lawyer. However, he was not ready to give any statements.

In the coming days, we can see how the car accident attorneys for the victims fight for justice and put the at-fault driver before the law.

In another accident in Harris county, a 19-year-old fled the scene after hitting a motorcyclist at 80 mph. The 21-year-old named Eduardo Edwin Rodrigo sustained multiple fractures, organ damage, and brain swelling and died, leaving his two-year-old child. Though the defendant Alejandro P. Monsibais claimed that he had checked the scene after the hit and, on seeing, nothing left the scene. However, the CCTV footage showed the youngster driving another three miles before abandoning his maroon Cadillac in someone’s driveway and fleeing.

To wrap up, fleeing the scene of a car accident is in no way a great idea, even if it’s a minor crash. It may turn out more hefty for the running driver than causing the accident.

Going ahead with a personal injury lawsuit in a hit-and-run is not easy peasy. If you are victimized, pursuing the support of a car accident attorney would be the finest decision. It would increase the odds of earning deserving compensation. He would help you to deal with the police, insurance providers, and the liable party.