Understand Dog Bite Law and How to Fight Your Claim

Did a stray dog attack you? Have you sustained injuries from your neighbor’s pet dog? Understand the dog bite law of your state to pursue the claim.

Petting dogs is enjoyable and fosters a bond between humans and dogs. However, never try to pet unfamiliar dogs since most dogs attack strangers and people who trespass on the dog-guarding property. Therefore, they should be extra cautious of the potential injuries caused by the man’s loyal friend.

You can imagine how terrifying it would be to be bitten by a dog. Dog bites can be both physically and psychologically traumatic. The majority of the children who were bitten by dogs had undergone Post-Traumatic Stress Disorder (PTSD). This emotional trauma may be more dangerous than the physical injury itself.

According to the American Veterinary Medical Association, approximately 76.8 million pet dogs will be in the United States in 2021. A telephonic survey conducted in the United States between 2001 and 2003 noted that about 4,521,300 people were injured due to dog bites each year. Roughly 19 percent of those people required additional medical care for dog bite injuries. In 2018, approximately 27,000 reconstructive surgeries for dog bite injuries were performed. All these statistics show that millions are injured by dogs every year making it a serious issue to be taken care of. Let’s explore the reasons for dog bite casualties and the dog bites law that will help you throughout your litigation.

Significant factors that prompt a dog to bite people

Certain aspects can turn even normal dogs into aggressive despite their loyalty. Dogs show their discomfort by barking, tucking the tail, trembling, and growling. If people overlook such warning signs, they cannot evade a possible dog bite. Let’s see the factors that provoke dogs to bite humans. 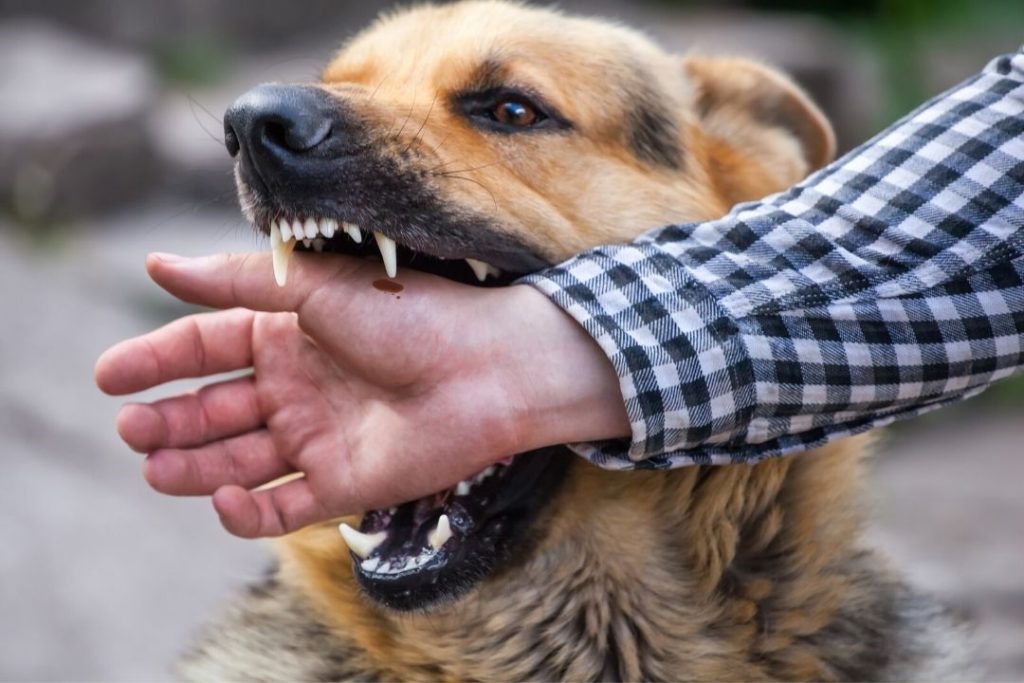 How fatal be a dog bite?

Even a minor nip by the dog can sometimes turn out to be fatal for you. The dog bite can transfer bacteria to your body and cause infections like tetanus, rabies, etc. Sometimes even if your dog licks over your existing wound, it can let the bacteria penetrate your body and potentially harm you. However, never worry until the nip breaks your skin and injures you.

Bacteria like Capnocytophaga, Pasturella, Staphylococcus found in a dog’s mouth can cause detrimental diseases to the human when they perforate the body. When the dog’s teeth create deep punctures on the skin, they can result in swelling and infection if unattended. A ferocious dog can potentially fracture your bone, damage the blood vessels or tear down the muscles.

Kids are most vulnerable to dog bite injuries since they play with them without knowing the danger. When the size and aggression of the dog are more, the gravity of the wound and the Cynophobia it creates in the kid’s mind will be greater. Such fear can lead to grave psychological issues in the future.

To reduce the severity of injuries, you should clean the bitten area with warm water and apply antibiotics. It would be best if you cover the dog bite wounds with clean clothes until you consult the physician. Usually, dog bite wounds are left open to be cured unless you have them on the face. Such tears should be sutured to prevent scars. Unattended dog bite injuries may increase the infection and end up in loss of life.

Profound and severe injuries may result in lifelong scarring and deformity, causing emotional anguish in the person. Dog bite treatment for emotional distress is inevitable too.

Steps to be taken after a dog bite injury

How Does Dog Bite Law Work?

The owner is liable for any injuries caused by his pet dog under strict liability. He cannot deny liability by claiming that he was unaware of the dog’s aggressive nature or no prior evidence of the dog’s vicious behavior.

If the dog is taken to the streets, it should be restrained with a leash or chain and kept under the caretaker’s or owner’s control. The dogs should not be allowed to run at large, which means they should not be allowed to leave the premises without the owner’s supervision. Many states forbid this and hold the owners liable. Some states consider it a misdemeanor for the owner to let his or her dog run loose on the grounds of a school, a restricted wildlife area, a park, a public resting area, a beach, and so on. During the breeding season, female dogs must be kept strictly on the premises.

There are several exceptions to strict liability legislation as well. Police and military dogs are excluded, even if they bite someone while they are on duty. Trespassers are not eligible for compensation because they entered the area unlawfully.

As the phrase tells us, the owner can be excused for the first bite injury (one free bite) made by the dog because the owner is unaware of its vicious tendency. He is not liable since that is the first incident of the dog’s aggressiveness. However, the owner will be held responsible if the dog has-

Under negligence law, the owner is responsible for the bite injuries caused by the dog as well as the non-bite injuries. In any way, if the owner becomes the reason for letting his pet make scratches, frightens people, especially kids, or creates post-traumatic stress disorder in them is also considered a serious offense on the part of the owner.

If the owner fails to warn the guest or visitor about the following and becomes the cause of their injury, he will be held liable under negligence law.

If the owner lets go of the dog’s leash in the park to let it play with other dogs and becomes the reason for the injury of others, he can be sued for his carelessness. Such negligence can lead to some accidents which can occur in the wink of an eye at unexpected moments.

Dog bite injury can turn your life upside down with severe infections, disfigurement, permanent scars, and fear and anxiety on seeing dogs. The cost of treatment for a dog bite will cost you an arm and a leg. Sometimes, you may need costly reconstruction surgeries to mask your scars. Therefore, claiming your compensation is the only way to manage the expenses. The dog bite law assures that the home owner’s insurance would cover your damages, even if the incident happens away from his home.

Like all the other personal injury lawsuits, the dog bite law also covers the given damages.

Many prominent factors would impact the dog bite claims in the U.S. The owner cannot be held responsible if the wounded person prompted the dog to bite by taunting, assaulting, increasing its fury, or hurting it. If the plaintiff trespasses the property knowing the dog’s vicious propensity and takes the risk, his claim cannot fetch him any recompense.

The judge or jury will take into account when you got treatment for your dog bite wounds. You tend to take first aid at home and might delay the treatment until you get apparent symptoms. This may affect your dog bite litigation since it questions the credibility of your injuries.

To defend themselves when threatened, dogs may bite once, which would be a dog bite. And the injury will be a mild one. At the same time, repeated aggressive bites will potentially be a dog attack. Such wounds will be deep and fatal. This stands as evidence for the dog’s vicious behavior. Experts can easily detect the dog’s behavior to determine if the bite was accidental or the result of vicious propensity.

Usually, a dog’s temperament will be permanent, and its prior history also would influence the litigation. Even the dog breeds known for aggression can be gentle and soft, and it can be proved if they have a good temperament and clean prior history. However, people with aggressive breeds as pets should have high premium policies to cover the possible dog bite in the future. Otherwise, they have to face the consequences.

When you are on the premises, which dogs guard, make sure the owner is with you. Trespassing unlawfully can end in a tragedy. Remember not to leave the kids alone with the dogs. When you go near a pit bull or a Rottweiler, remember they belong to aggressive breeds. Petting unfamiliar dogs won’t always turn out to be a happy-go-lucky experience.

Getting bitten by a dog can become detrimental to you physically, emotionally, and financially if you do not take appropriate steps at the earliest. Giving the physician all the possible details about the dog including its vaccination may help him give you a better treatment quickly.

A personal injury lawyer who knows dog bite law inside out can understand the strength of your claim. His expertise would walk you through the litigation to get your guerdon.

A chemical factory can cause harmful explosions due to the production of gases, the accumulation of heat, and the reaction. These can lead to severe plant explosion injuries, such as third-degree burns, or even significant property damage. #chemicalplantonfire #chemicalplantexplosion #chemicalexplosion ##chemicalplantfire