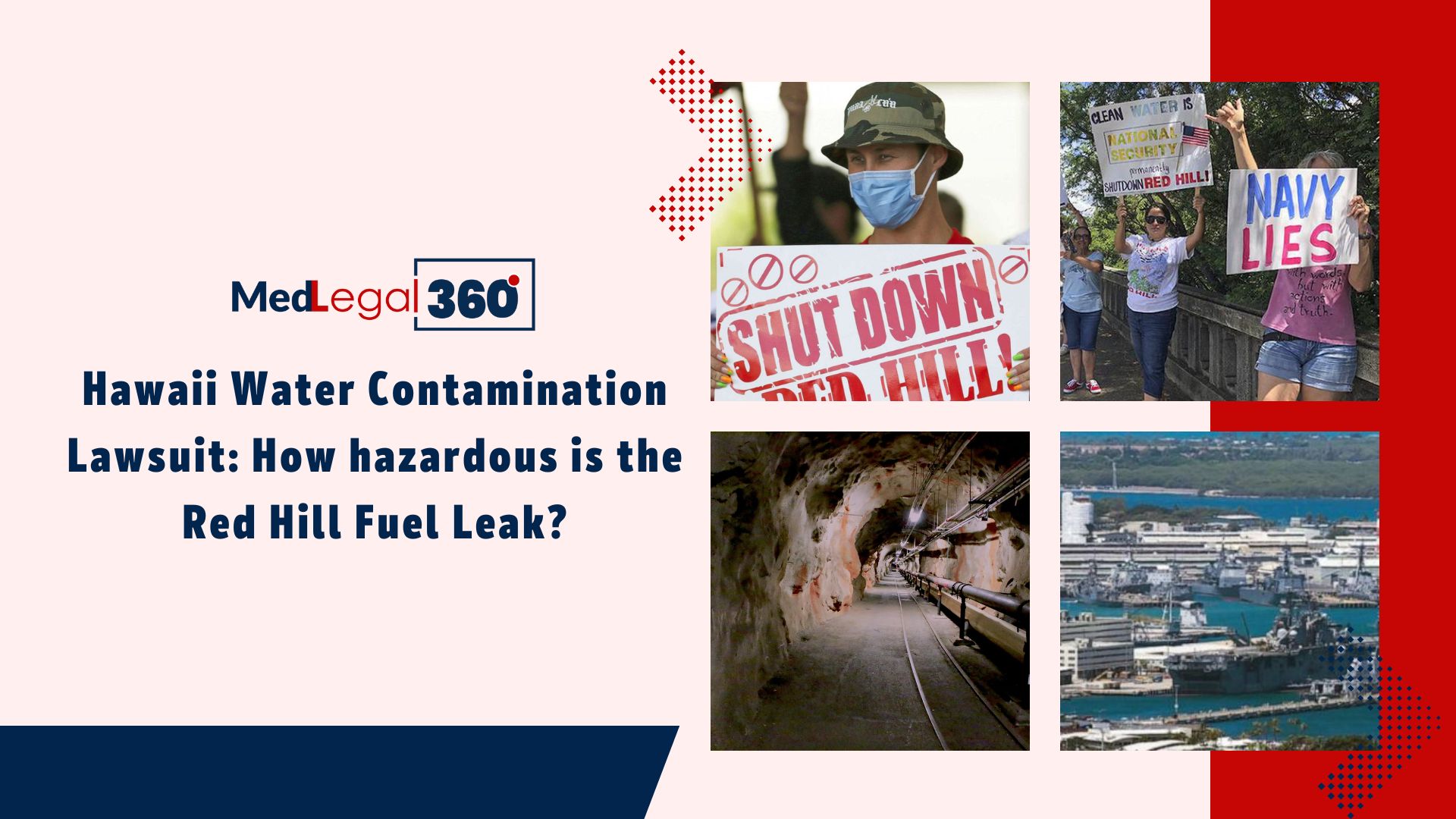 In this situation, another detrimental water contamination from the Red Hill fuel storage has led a few families of the Hawaii naval base to file the first water contamination lawsuit of its kind against the federal government. It is said that hundreds of victims are planning to file lawsuits.

Four families of Naval base have filed a lawsuit against the government under the Federal Tort Claims Act in the Hawaii District Court on August 31, 2022.  The water pollution lawsuit ensued from the Navy’s “negligence, trespass, nuisance, and medical malpractice resulting in physical and emotional injuries.”

Do you want to know what happened at the Red Hill facility? Let’s go back to 2021 to get some insights into the source of water contamination.

Around 93,000 individuals who lived in the Army’s Aliamanu Military Reservation, Red Hill Housing, and Joint Base Pearl Harbor-Hickam had their water contaminated by petroleum from the World War II-era subterranean Fuel storage facility. The Red Hill facility was designed to safely store millions of gallons of jet fuel during World War II from the enemies’ aerial attacks.

In 2021, two fuel leaks from the Red Hill Bulk Fuel Storage Facility, one in May and the other in November, contaminated the water supply system at Oahu.

In 2021, two leaks at a US Navy fuel facility contaminated Oahu’s drinking water.
In March, the US Navy and Hawaii’s Health Department claimed the water was once again safe to drink, but some families still reported getting sick.

During routine fuel movement operations at the Fuel Storage Facility on May 6, 2021, a pressure influx caused a joint pipeline failure, releasing over 19,000 gallons of JP-5 jet fuel onto the tunnel between the underground storage tanks.

On November 20, 2021, the Facility had another leak when the damaged fuel drain pipeline leaked the jet fuel spill into the tunnel system near the Red Hill drinking water system shaft.

Fuel leakage at the Red Hill facility is not something new. It has been leaking for at least 75 years, with the first leak discovered in 1947. January 2014 saw the most significant known leak ever in history, letting out 27,000 gallons of fuel due to an earthquake.

After the subject twin fuel leaks, the Navy kept mum about the hazardous situation to the residents and the public. After hazardous quantities of petroleum compounds were discovered in the Navy’s Joint Base Pearl Harbor-Hickam water system in November 2021, health officials and the Navy issued orders instructing residents of Pearl Harbor and the nearby region to avoid using tap water.

However, before the warning, many complaints started pouring in, reporting petroleum odor in the drinking water. After running the taps for three days to clear any stagnant water, one resident still noticed a sheen in her water.

But the Navy was initially strong in the stand that “no petroleum constituents were detected in initial testing.” Later they advised the residents to discontinue using the water for consumption, cooking, or bathing.

Investigations by the U.S. Pacific Fleet revealed that institutional incompetence and human error were to blame for the two disastrous leaks that happened months apart.

How Hazardous is the Fuel Spill in Hawaii?

The survey by the Centers for Disease Control and Prevention agency’s Toxic Substances and Disease Registry involving 2,289 residents revealed that more than 87% reported nausea, skin rashes, and headaches. However, this is only a sample, as only 14% of the residents participated in the survey. If dug deep, more startling truth will be unmasked.

The victims of water contamination in Hawaii reported having the below-mentioned health issues. Many people reported more than one issue.

These symptoms reported by the people in the survey were consistent with those of petroleum hydrocarbon exposure. This toxic chemical exposure may lead to more adverse consequences than we have seen here.

On November 30, 2021, the Hawaii Department of Health issued a drinking water advisory to flush out the water distribution system, including all the buildings surrounding the area. On March 18, 2022, officials announced that the water system was safe to drink and asked residents in the temporary camps to return to their residences.

The Hawaii Department of Health (HDOH) issued an Emergency Order, Docket No. 22-UST-EA-01, on May 6, 2022, regarding the defueling and closure of the Red Hill Bulk Fuel Storage Facility’s 20 underground storage tanks, surge tanks, and associated piping. The first phase of the defueling plan was conditionally approved by the DOH. The DOH is expected to receive a complete plan for the Facility’s closure and the safe disposal of the remaining fuel by November 1, 2022.

In the wake of the Hawaii fuel leak and water contamination, many activists and protectors wage legal campaigns against the Navy and the federal government for negligence.

The first water contamination lawsuit was initiated on behalf of the plaintiffs by attorneys Kristina Baehr and Lyle Hosoda. They blamed the federal government for being negligent and causing harm to the citizens.

The plaintiffs claimed that they were compelled to return to their residences once the water system was said to be flushed out. But even after that, they became sick. The military base water contamination lawsuit alleges, “While the government failed to disclose the contamination as required by federal law, these families continued to ingest and immerse themselves in the toxic water.”

The plaintiffs in the water contamination lawsuit are:

The water contamination lawsuit claims that the Navy “harbored toxic secrets” after the toxic jet fuel leak in the Red Hill Facility for months after the first leak.

Army Major Amanda Feindt, whose family is one of the plaintiffs, stated, “You’ve got American citizens being poisoned by an American asset on American soil.” Her words voice out the woes of thousands of citizens.

None of the plaintiffs’ families reside in the Navy base anymore, but they are still experiencing severe symptoms from the toxic water exposure.

Numerous families claim that they are still coping with long-term, chronic health problems.

A PGA golfer alleged that his internal bleeding and the five surgeries he had undergone since the fuel leak were due to water contamination.

According to the water contamination lawsuit, one family claimed that the seizures, rashes, brain fog, eye irritation, teeth and gum problems, nausea, vomiting, memory loss, and abdominal pain their family is undergoing are the aftermath of the drinking water contamination.

The important fact to be noted was that the Joint Base Pearl Harbor-Hickam water system supplies water to an estimated 9,694 civilian and military households. This indicates that the number of people exposed to water contamination is very large.

Many people are expected to come out to fight against the government with their drinking water lawsuits in the future for turning a blind eye to hazardous water exposure.

Many feel that a replacement of the water system to the Hawaii and Red Hill facility is the need of the hour.

The number of Red Hill lawsuits is swelling day by day.

The beginning of November 2022 saw more than a hundred plaintiffs, including civilians and veterans, claiming that the water contamination at the Red Hill facility affected their health and drained them emotionally and financially.

Whitney Trimble, chief of public affairs for the Defense Health Agency Region Indo-Pacific, told CNN on November 11, 2022, that there are plans to build a dedicated clinic for patients experiencing symptoms connected to fuel leak exposure in November 2021.

A recent survey on water contamination in Red Hill by the Hawaii Department of Health (DOH) and the Centers for Disease Control and Prevention/Agency for Toxic Substances and Disease Registry (CDC/ATSDR) in September 2022 made startling discoveries.

Many individuals claimed worsening health as a result of the occurrence. When compared to before the incident, 55% reported lower physical health, and 50% reported worse mental health. Around 65% of the participants affirmed that the fuel leak and water contamination caused their symptoms.

Let’s wait to see if the Red Hill facility will be shut down soon or not.

How the Navy is going to handle the upcoming Hawaii water contamination lawsuits is the question in the minds of the victims and the citizens all around the U.S. Keep your fingers crossed to know the course of action going to be taken in the pioneer lawsuits of its kind.

Let’s hope the outcome of the water contamination lawsuits will restore the citizens’ trust in the federal system.