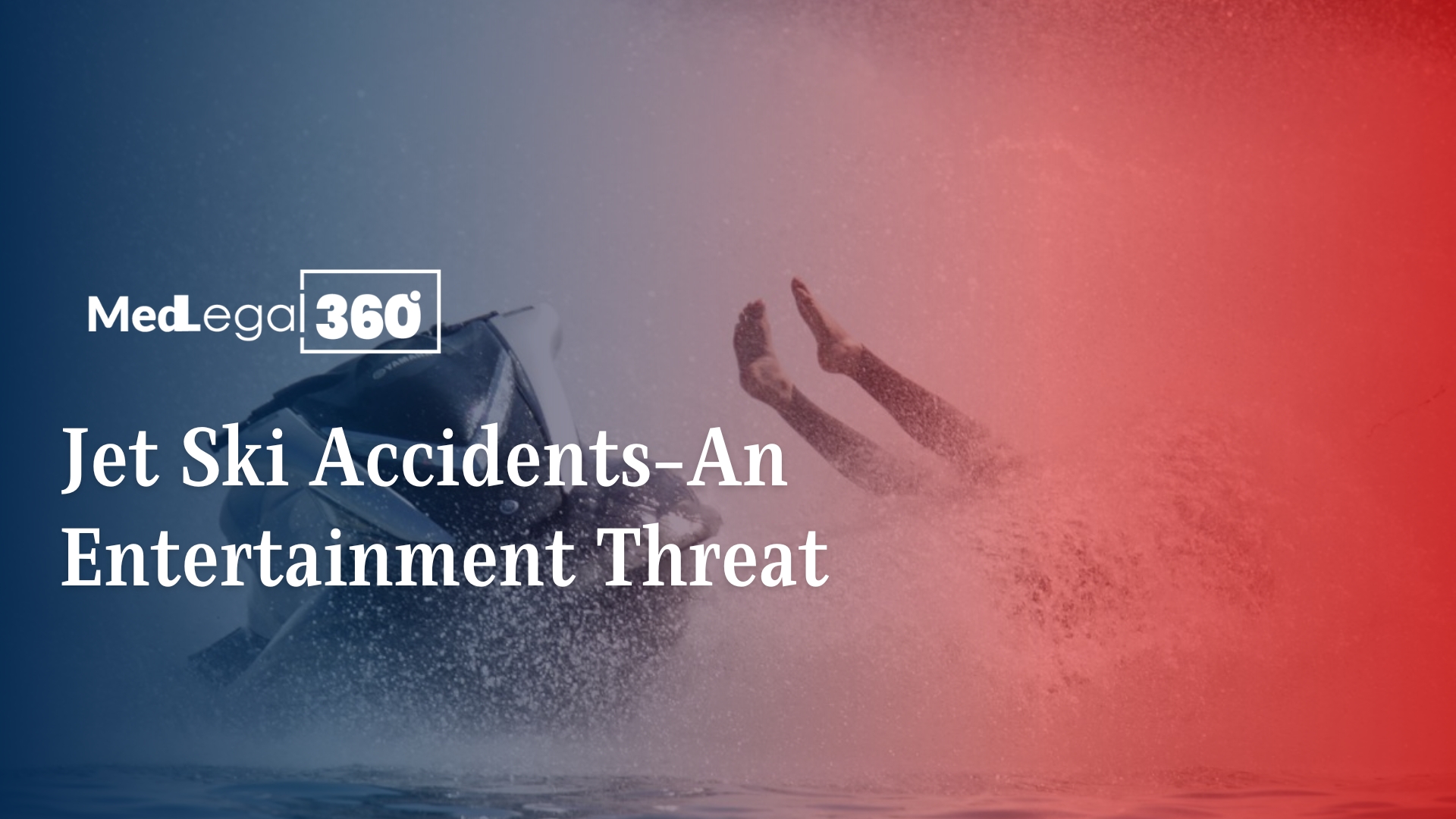 Are you just like me, one who enjoys a thrill while racing through the waves?

Woah! Who could ever say no to such thrilling jet ski rides?

But did you know the facts about jet ski accidents?

Have you or your family members been in a jet ski accident?

Are you wondering who is to blame for your jet ski injuries?

If yes, this blog is for you.

Jet skis are popular watercrafts that are also known as “water scooters,” “Sea-Doos,” and “Wave Runners.”

Jet skis are popular among thrill seekers because of their diminutive size, convenience of use, acceleration, and pay.

They are quick and effective watercrafts that can go up to 65 mph. This is equivalent to the speed of an interstate vehicle. A jet ski does not, however, have airbags or seatbelts. Accidents with jet skis might result in severe injuries.

Clayton Jacobson II, an engineer, created the first jet ski prototype in the mid-1960s. The first stand-up jet ski was produced in 1973 after multiple revisions of his basic idea.

Today’s jet skis slice through the water like a knife through butter.

Jet skiing has grown in popularity since the 1980s. This implies that more beginner riders have obtained access to the rental equipment.

With increased access comes increased risk, as operators may need to learn the regulations of the waterways or how to utilize their vehicles effectively.

This adventure vehicle has gotten increasingly sophisticated and frequently utilized over the years, and the frequency of jet ski accidents has skyrocketed.

The United States Coast Guard reports that over one million registered jet skis are in the country.

Although jet skis account for only around 8% of all watercraft, they cause about 26% of all injuries. In 2012 alone, 779 personal watercraft accidents were reported, with 58 people killed.

Per year, 40 to 50 jet ski deaths are reported in the united states of America. 2012 is the year where the highest number of deaths were reported.

There are several causes of jet ski accidents, some are as follows:

According to the NTSB (National Transportation Safety Board), irresponsible behavior accounts for approximately 26% of all jet ski incidents. More than a quarter of all jet ski accidents are caused by this.

One of the main factors for the high accident rate is exceeding the speed limit on a jet ski. Another example of irresponsibility is when a pilot drives jet skis across dangerous seas.

Jet skis are quite simple to use. Step onto a platform, turn the key, and well, you can go. However, driving a jet ski needs more expertise than riding a bicycle.

Before you embark on the high seas, you must accumulate a lot of experience. One of the significant causes of jet ski injuries is operator inexperience.

Inexperience can lead to incidents such as driving too quickly or failing to make a wide enough turn.

Operating under the influence

Something about the wide water inspires watercraft operators to consume excessive liquor. The enjoyable characteristic of driving a jet ski makes it appear that drinking and operating are all good fun.

However, drunkenness is just as dangerous on a jet ski as on a car.

Some of the most violent watercraft collisions have been caused by alcohol use. Alcohol weakens motor skills and leads to bad judgments in open water.

Not all jet ski accidents are caused by operator mistakes.

Many tourists rent jet skis during their holidays. Because some jet ski rental companies fail to maintain their inventory of jet skis effectively, the watercraft can go wrong at the worst possible moment.

Most common jet ski injuries and their precaution

Whiplash on a jet ski

Whiplash can happen when a jet ski unexpectedly changes direction or speed, just like in a car collision.

While moderate cases might result in headaches and neck stiffness, severe cases can result in ear hemorrhage and immobility.

On a jet ski, the most accessible approach to avoid whiplash is to keep an eye on the throttle and gently modify speed and direction. Avoid making rapid moves, and make your turns as broad as possible.

Along with property damage, you may have significant fractures and total breakages, which are more prevalent than expected.

Slowing down is the greatest approach to lessen your risks of experiencing a sprain or fracture.

Friction burns can occur when a rider’s skin swiftly scrapes against the rope or the jet ski’s paddles.

Friction burns are not as dangerous as other damages on this listing, but they can rapidly get infected if not treated properly.

Wearing gloves when operating a jet ski may lessen, if not eliminate, the possibility of getting a contact burn.

Not only will the proper gloves avoid blisters and pains, but they will also improve your grip when cycling.

Cuts and bruises may be excruciatingly unpleasant. Lacerations are quickly infected, especially if exposed to bacteria or open water. If the incision is deep, stitches may be required to seal it.

Wearing protective gear when driving and riding is the greatest method to avoid cuts, bruises, and severe lacerations.

Common flotation equipment, such as a life jacket, can assist you if you fall off the vehicle and protect you from scratches.

Concussions are prevalent when a driver or rider is thrown from their vehicle and collides with water, another vehicle, or another obstacle.

Drivers and riders suffering from concussions sometimes do not realize the extent of their injuries until symptoms arise.

Jet ski operators who wear protective headgear have a far lower likelihood of developing a concussion.

Reduce your speed to reduce your chances of losing control of your jet ski or colliding with another vehicle on the water.

Jet ski crashes can result in severe contusions for both drivers and passengers. However, often exiting and entering the water is among the most typical sources of bruises.

This can cause severe soft tissue bruising or probably tailbone damage.

Regulating your speed when riding a jet ski, like many other injuries on this list, is the best way to avoid significant contusions.

Injuries to the spine

Spinal injuries are frequently fatal, resulting in paralysis or even wrongful death. Lousy weather is often at blame, although forceful crashes can also result in spinal injury.

Ride a jet ski only in good weather, and attempt to have a spotter on hand before setting out.

Although a spotter cannot prevent a spinal injury, they may assist you if one occurs.

Who is responsible for jet ski accidents?

A thorough investigation by a knowledgeable lawyer about maritime law who has experience handling watercraft accident lawsuits is frequently required to determine the cause and who ought to be held responsible.

Establishing responsibility and liability will likely begin with the following questions:

In the event of a watercraft accident, potential defendants include:

If more than one party is at blame, damages will be distributed based on each party’s relative contribution to the accident.

What compensation is available in a jet ski accident?

Most individuals hurt in boating or jet ski accidents are entitled to compensation for their physical suffering and economic damages.

Total compensatory damages may include the following:

You frequently have to defend yourself against unjustified claims made by insurance companies that the accident was your fault to receive the most feasible compensation.

If I contribute to an accident, am I still entitled to compensation?

It’s feasible. However, the amount of your share of the blame will be deducted from your settlement. You won’t be compensated if you are more than 50% at fault.

How long does a jet ski accident claim take to settle?

On average, most lawsuits involving jet ski accidents are resolved in one to two years. While some cases settle considerably more quickly than others, more challenging ones may take longer.

You would probably choose to settle as soon as possible if you had significant bills.

How long after a jet ski accident do I have to bring a lawsuit?

The deadline called the statute of limitations to file a lawsuit for a jet ski accident depends on where you live. Normally you must file a personal injury case within two years of the accident date.

It’s best to work with an experienced lawyer when filing a lawsuit.

Contribution of medical records in a jet ski accident lawsuit

Medical records are the proof that will demonstrate how the accident hurt you and depending on the seriousness of your injury, you may be entitled to compensation from the defendants.

For a brief understanding, please see the pin.