Risperdal Lawsuit: What the issue is all about? 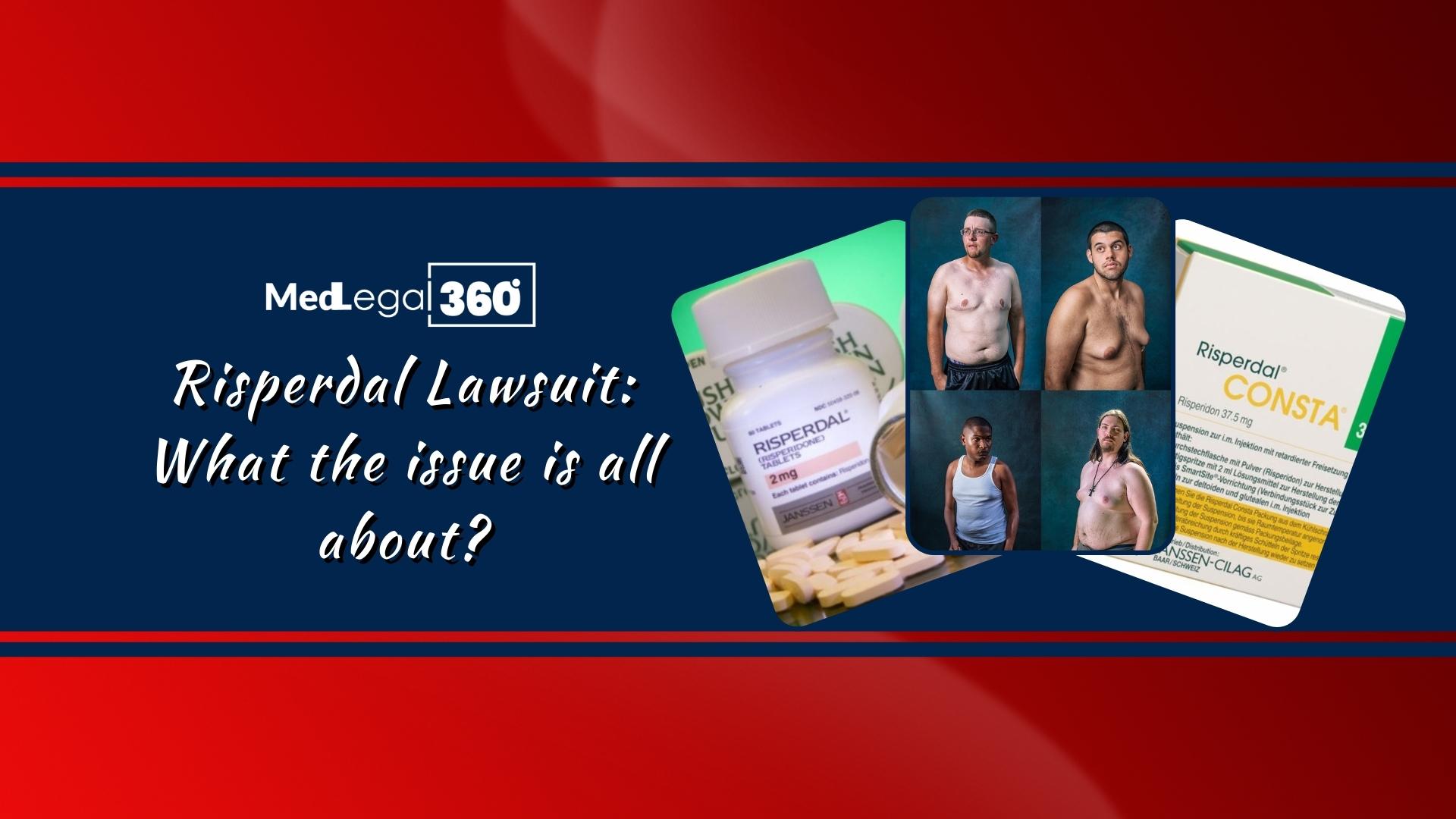 Some medications may have undesirable side effects, and the drug manufacturer must warn patients about them. If the manufacturer doesn’t, they will be accused if the drug harms anyone who takes it.

Numerous product liability Risperdal lawsuits have been brought in recent years against the well-known medication Risperdal.

Let’s take a closer look at Risperdal lawsuits, the factors that led to the manufacturer being sued, and what you should do if you experience adverse side effects while taking it.

Risperdal (Risperidone) is a medication prescribed to treat several mental and mood disorders, which include

Risperdal belongs to a class of medications known as atypical antipsychotics. It acts by assisting in the stabilization of several natural substances in the brain.

The antipsychotic medication Risperdal was first approved in the United States. The FDA approved it in 1993 to treat schizophrenia and bipolar mania.

In 2006, the FDA approved Risperdal for the treatment of autism-related irritability. Risperdal and its generic brand, Risperidone, were then widely used to treat other mental disorders such as anxiety, depression, and attention deficit hyperactivity disorder (ADHD).

Who’s the manufacturer of Risperdal?

Janssen Pharmaceuticals, the manufacturer and supplier, developed the drug and received FDA approval for its medical use in 1993. The company made an incredible $18 billion in profits.

The firm reached a dizzying peak in 2007 as Janssen Pharmaceuticals earned $4.5 billion. However, by 2012, the patent had expired, and they could only make $358 million.

What are the side effects of Risperdal?

Some of the most common side effects of Risperdal are:

If these side effects are minor, they may subside within a few days or weeks. If the symptoms are severe, inform your pharmacist.

The following are some of the severe side effects of Risperdal:

What about gynecomastia and Risperidone?

Gynecomastia is a growth in the size of a boy’s or man’s breast gland tissue resulting from an imbalance of the hormone levels testosterone and estrogen. Gynecomastia can affect one or both breasts.

Risperdal consumers not only gain fat in their chest tissues, as it is common in overweight boys and men, but they also gain excess breast tissue. Typically, a growth begins as a small lump under the nipple. The nipple may become tender and grow in size over time.

The degree of growth varies from individual to individual. When Gynecomastia affects both breasts, each can be affected differently. One breast tissue may grow more extensive, resulting in a more uncomfortable social stigma for the patient. Males produce breast milk in some cases of Gynecomastia.

J&J used aggressive marketing to convince doctors to prescribe Risperdal to children. The State and federal prosecutors also claimed that the company ignored FDA warnings not to promote the antipsychotic for use in children.

They claimed, in particular, that J&J promoted Risperdal for pediatric use as early as 1994, despite receiving FDA approval for any Risperdal pediatric use only in 2006.

More than one-fifth of Risperdal was prescribed to children and adolescents by 2000.

The FDA took notice of J&J’s Risperdal-related actions, which included illegal child marketing and treating conditions for which it was not approved.

Risperdal is labeled with a “black box warning,” the FDA’s strongest label. It indicates that the medication has serious side effects, including death. This occurred in 2005 after Risperdal was discovered to affect elderly dementia patients who were aggressive or psychotic. The drug caused these patients to have strokes or die due to cardiac events.

Is there a lawsuit against Risperdal?

As of December 30, 2018, 13,400 Risperdal lawsuits had been filed, mostly in Pennsylvania, California, and Missouri, according to Johnson & Johnson’s annual report.

Many Risperdal lawsuits against Johnson & Johnson and Janssen Pharmaceuticals were filed by young adults who were completely unaware of the connection between Risperdal and male breast growth side effects.

The first Risperdal lawsuit alleging Risperdal-related injury was filed in 2010 by a 21-year-old man who had taken Risperdal for off-label use between 1999 and 2004 and suffered physical and emotional trauma resulting from the development of male breasts or Gynecomastia.

Johnson & Johnson settled the case for an undisclosed sum on the first day of trial in 2012, before the plaintiff’s attorney called a former company CEO as a witness.

The same year, Johnson & Johnson was accused of improper marketing practices and fined $1.2 billion in an Arkansas federal court for claims that they underestimated risks and that their marketing activity caused over 240,000 cases of Medicaid fraud and 4,500 deceptive practices.

Austin Pledger became the first Risperdal victim to win a jury trial in February 2015. Pledger, a resident of Alabama, was prescribed the medication in 2002 and later developed Gynecomastia.

After developing size 46 D.D. breasts, he sued the drug’s manufacturer, alleging that the company failed to disclose or adequately warn of such side effects before Pledger was prescribed the medication.

The court ruled that J&J failed to warn Pledger that the drug could cause breast development and awarded him $2.5 million.

Shaquil Byrd, then nine years old, was prescribed Risperdal for mood disorders in 2002. By age ten, he had developed female-like breasts and was lactating. In 2014, Byrd had his breasts surgically removed.

A federal jury in New York awarded Byrd $1 million for his claim that the drug caused him to develop Gynecomastia. The verdict in September 2017 included $500,000 for past pain and suffering as well as an equal amount for future pain and suffering.

Billy Cirba filed a Risperdal lawsuit against J&J in March 2013, alleging that years of Risperdal use caused him to develop large breasts. Cirba stated that he began using the drug at the age of six in 2002. The drug was only approved for use in adults at the time.

A jury found J &J to have illegally marketed the drug in March 2015. However, no damages were awarded because the jury could not find evidence that the drug caused Cirba’s breast growth.

Timothy Stange of Wisconsin filed the third Risperdal jury trial. In the first jury trial, the plaintiff began taking Risperdal after the FDA expanded its use to include treatment for bipolar disorder in adults and adolescents, as well as autism spectrum disorders in children and adolescents. He was already on Risperdal from 2006 to 2009. The jury awarded Stange $500,000 in damages.

The court scheduled a retrial in the case in September 2018 to determine whether the drugmaker should also be ordered to pay Stange punitive damages.

In the fourth trial, a jury awarded Nicholas Murray $1.75 million. Murray developed breasts as an adolescent after taking the drug for five years. He continued to take the medication after the FDA expanded its approval for use in children. The jury concluded that J&J failed to adequately warn the risks of breast growth.

In June 2013, Barbara Dawson of Virginia filed a Risperdal lawsuit against Janssen on behalf of her son, P.D., as per court documents. According to the case, Janssen did not sufficiently disclose the risks associated with the medicine. In February 2017, Judge Arnold L. New granted Janssen’s request for summary judgment.

The overall amount paid in settlements and punitive damages for the cases was more than $800 million. Some of the compensations settled in Risperdal lawsuits are:

A settlement of $680,000 was awarded to a plaintiff prescribed Risperdal for autism in 2003 and later developed female-like breasts. According to the plaintiff, the drugmaker failed to warn doctors and patients about the risk of developing Gynecomastia.

An adolescent boy who began taking Risperdal in 2003 at eight for autism-related behavior disorders and developed Gynecomastia was awarded $70 million. The jury found that Janssen Pharmaceuticals, a Johnson & Johnson affiliate, purposefully misled consumers by providing false, or concealing evidence of the risks.

Johnson & Johnson was ordered to compensate $8 billion in punitive damages to a 26-year-old victim in October 2019 for failing to set priorities for patient safety over profits. The patient had received a $680,000 settlement in damages.

If you file a personal injury lawsuit against Johnson & Johnson, you may be able to recover the following:

As of 2022, Johnson & Johnson announced that it had settled nearly all of the thousands of lawsuits filed against it by men who claimed they developed male breast tissue after taking Risperdal to treat a psychiatric condition.

However, having experienced the side effects of taking Risperdal years later, the victims are still suing.

What to do if you think you may have a Risperdal lawsuit?

If you suspect Risperdal is causing side effects, you should first go to your doctor’s office. He or she will report whether the medication is causing pain, mood swings, tissue enlargement, or other side effects.

If you or your son have experienced or are experiencing side effects and your doctor claims it is due to Risperdal, you should file a Risperdal lawsuit.

A few things to consider before filing

Before filing a case, be conscious that each state has a Risperdal lawsuit statute of limitations, after which you cannot file a lawsuit. Some states allow you one year to file a personal injury claim, so protect your rights and file as soon as possible.

The importance of medical records is another thing you should be aware of. It helps your attorney review your whole medical history and enlightens him of the ways in which Risperdal’s side effects have damaged you or your son.

As a result, your lawyer strengthens your Risperdal lawsuit and guarantees you receive fair compensation.