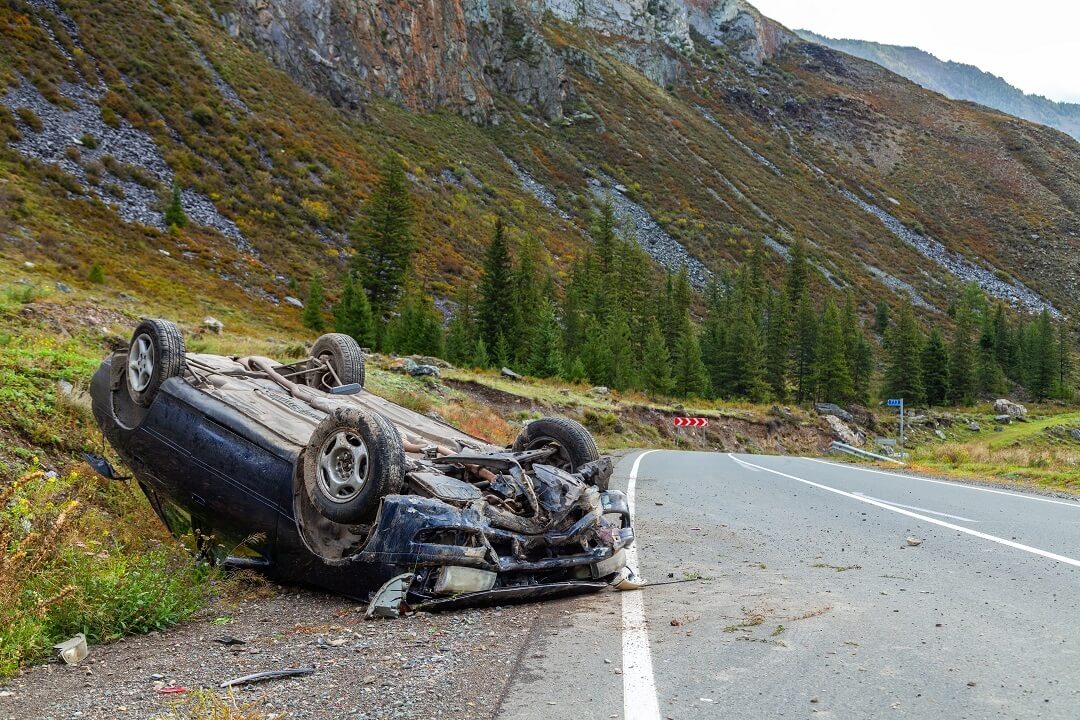 A rollover accident is much more than a usual fender-bender. Even if you are an average Joe, the word ‘rollover’ would have given you a hint on this type of traffic collision we are going to delve into. I am sure you would have enjoyed rollover action sequences in your favorite movies. What if you meet with such a crash? A happy ride may turn out to be dreadful. Moments of fun may end up in mishanter. Literally, you would feel flipped over.

In this blog, we would be exploring the different facets of rollover accidents and the ensuing personal injury claims.

A rollover accident occurs when the vehicle tips over onto its side or roof. Some of the common culprits associated with a rollover accident are SUVs, construction vehicles, vans, pickup trucks, box trucks, four-wheel drives and commercial trucks.

See how a rollover accident occurred in tis video.

Rollover crashes contribute to less than 3 percent of all passenger vehicle accidents. Still in highway fatalities, they represent around thirty-five percent. Every year 1,000 heavy truck occupants are killed in truck accidents in which rollovers are identified to play a key role. 78 percent of those cases were at-fault accidents because of the truck drivers. These data represents the severity of the injuries in a rollover accident.

What are the types of Rollover Accidents?

Rollover crashes are divided into two depending upon the factor that leads to the rollover. They are.

A tripped rollover occurs when the vehicle leaves the roadway and it trips on something. Possible hazards in the road involve debris, cracks, potholes, etc.  More than 95 percent of the rollover accidents are of this type.

Un-tripped rollovers are less common and do not involve any external objects. It involves forces from the tire, centrifugal force and gravity acting in different directions. This causes the vehicle to flip over especially at a higher speed and during swerving.

A rollover crash occurs when the center of gravity of the vehicle shifts and then tips over the vehicle. Various factors like type, size and shape of the vehicle play a vital role in rollovers. A vehicle with higher ground clearance and weight would have less stability when compared to that of a small compact vehicle. This is due to a rise in the center of mass. Heavy loading on these vehicles further accelerates the possibility of a rollover.

Vehicles having a comparatively higher center of gravity, make them vulnerable to a rollover accident. Modified vehicles with aftermarket suspensions and larger wheels are also found more disposed.

Electronic stability control (ESC) is a device that helps reduce rollover collisions in advanced vehicles. According to various safety tests, the following are some of the vehicles that are more vulnerable to rollover accidents.

Rollover accidents may be caused by the following reasons mentioned below.

This video shows how a rollover accident can end up in a multi vehicle collision on a busy road.

It is to be noted that these are the immediate sources. However, common grounds that lead to these causes would be driving under the influence (DUI), distracted driving, driving at high speeds, unfavorable weather conditions, overloading the vehicle, etc.

How to face a rollover crash?

Those few seconds before and after the rollover would be central in determining the severity of the accident. While it is easy to say not to panic, staying calm in an accident is more complicated. Studies report that post-rollover injuries are often associated with rollover accidents. Though the driver cannot control a rollover, following these steps may help to prevent fatal injuries and manage the situation.

What happens to your body in a rollover accident?

When the vehicle crashes and tips during a rollover accident, the occupants get ejected from the vehicle. This could result in fatal injuries when the body is impacted at different angles by the objects on the road. The severity of a rollover increases when the users do not wear seatbelts. When the vehicle is in an unpredictable motion or stops abruptly it may cause catastrophic injuries.

Here are the common injuries resulting from a rollover accident.

Whiplash injuries are often reported in rollover accidents where the neck of the victim is subjected to sudden forward and backward movements.

Spine injuries stemming from a rollover accident is often catastrophic as there would be a heavy impact on the spinal area during the mishap. Spinal compression and disc damages are the two common spine injuries reported in rollover vehicle crashes.

Knowing the extent of the impact a rollover accident could impose on the human body, fractures would be a very common injury. Fractures of the arm, limb and ribs often occur which may be minor or serious.

The sheer impact of a rollover accident could cause damage to the internal organs, leading to heavy internal bleeding. If internal bleeding is unidentified in the emergency room, it could turn out fatal.

During a rollover crash, the head comes into contact with different objects inside the vehicle like the roof, steering wheel, dashboard, window and also with the objects on the road. Leaning forward during the rollover often results in serious head injuries like Traumatic Brain Injury (TBI), concussion, etc.

Like any other vehicle crash, cuts and lacerations are common in a rollover accident and may depend upon the severity of the impact. Severe cuts may end up in blood loss making the condition fatal.

Hope you might remember the Golf Superstar Tiger Woods was involved in a SUV rollover accident a year back and got injured badly. this video tells you how the accident occurred and about his leg injuries.

What should you do after a rollover accident?

The immediate thing to be done should be checking for injuries and seeking medical care. Informing the police, taking photographs of the scene, collecting information of witnesses and the other party involved in the accident would be necessary like in any other vehicle crash. Without delay, contact your personal injury lawyer and have a case evaluation. He would help you file the claim on time.

Is a rollover an at-fault accident?

85 percent of the rollover accidents involve only a single vehicle-says NHTSA. In such cases, the crash would be the fault of the driver. When there is a passenger in the vehicle who gets injured because of the negligence of the driver, then the driver could be sued by the victim.

A minivan rollover caused the death of a mother and two children and injury in several occupants. Prior to the accident, the defendant had a flat tire which was replaced at a local Walmart. Plaintiffs sued the driver and Walmart for the rollover. It was established that Walmart did not follow industry safety standards and was negligent to inspect the inside of the rim for rust before replacing the tire. The claim resulted in a verdict of $18,921,775.

Probability of receiving compensation after a rollover accident depends on who was at fault for the accident. It may get complicated when the insurance company tries to place an argument that the claimant is at fault. This could lead to an aggravating situation. If you are not diligent, you may have to accept a settlement that is less than what you require to cover the costs of your injury. Personal injury attorneys help the claimants to take away the right compensation for the injuries and damages they sustained. A battle-scarred car accident attorney would know the tips and tricks to win a rollover accident claim. He would strongly negotiate with the insurance carrier to get you the highest settlement.

Like any other personal injury lawsuit, compensatory damages for rollover accident lawsuits include current and future medical expenses including ambulance bills, medications, surgery bills, rehabilitation expenses, etc. It would also cover expenses for vehicle repair, in-home care of the claimant, loss of income, emotional distress, and loss of consortium of the claimant. If the accident causes death of the victim, the family members of the deceased are entitled to file a wrongful death lawsuit against the defendant.

The Schaar & Silva LLP secured their client a million settlement in a rollover accident traumatic injury case. you can also secure deserved compensation with the help of an experienced lawyer.

Our client suffered a traumatic brain injury in this freeway rollover accident and our team was able to procure a $1.4M settlement. We hope this helps them get their life back on track. pic.twitter.com/LqKPibmAEX

A rollover accident may turn your vehicle upside down but not your life. Life-threatening injuries from a rollover would demand costly medical treatments and rehabilitation services.  Seeking compensation would not make up for the pain and the emotional trauma you come across. However, a successful rollover accident lawsuit would end up easing your financial burden.  Get in touch with an expert personal injury attorney before it’s late.

Better be safe than sorry. Slow down and be cautious when behind the wheels. When hunting for a new vehicle, check out for safety features like electronic stability control and side curtain airbags.