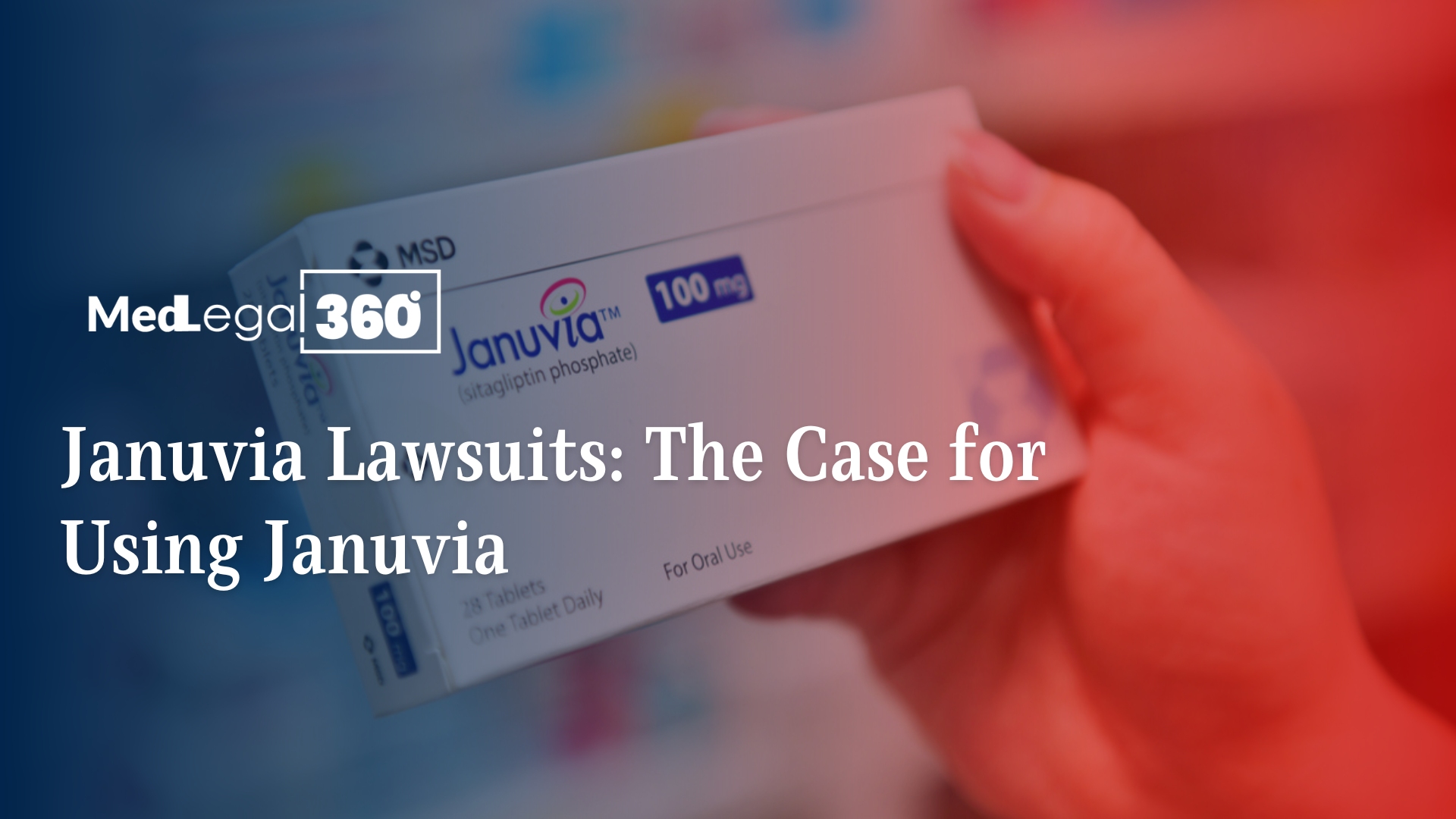 Have you ever used the prescription drug Januvia to treat Type 2 diabetes on your own? Serious Januvia side effects have been recorded by a few patients taking this well-known diabetic medication from Merck & Co.

The probability of Januvia’s adverse effects has gradually increased people’s concern. In this blog, we will see about the drug Januvia, Januvia adverse reactions, and Januvia lawsuits.

The medication sitagliptin is marketed under the well-known brand names Januvia and Janumet and is used to treat type 2 diabetes. Sitagliptin is a member of the DPP-4 inhibitor medication class.

It is a component of the dipeptidyl peptidase-4 (DPP-4) inhibitor medication class. These medications help you produce more insulin and lower your blood sugar levels by acting on the liver and pancreas.

Is Januvia dangerous? Januvia has severe adverse reactions, which include pancreatic inflammation (pancreatitis), which can be fatal in extreme cases. Pancreatitis is more likely to occur if you have specific medical conditions.

Does Januvia cause cancer? who makes Januvia? The popular diabetes medication Januvia from Merck & Co. was discovered to have a possible carcinogen that can lead to cancer.

How does Januvia Control Blood Sugar?

To treat high blood sugar, Januvia is taken along with a healthy diet, an exercise routine, and maybe other drugs. This drug lessens the amount of glucose your body produces and aids in stabilizing insulin levels. When used without other diabetes medications, it typically does not result in low blood sugar or weight gain.

Your intestines release incretin hormones throughout the day and in reaction to meals, and Januvia is considered to function by reducing their inactivation. The intricate mechanism that helps to control your blood sugar includes incretin hormones.

What are Januvia’s Threats and Warning Symptoms?

Side effects of Januvia

The abrupt inflammation of the pancreas is known as acute pancreatitis. It can endanger lives and is quite harmful. Acute pancreatitis can strike unexpectedly and repeatedly, but patients can usually recover fully with treatment.

Patients should consult their doctor before quitting or changing the medication dosage.

Numerous Januvia lawsuits were brought by those who experienced these side effects against Merck & Co. The Januvia class action lawsuit claiming that the drugmakers had neglected to warn about the risk was filed in courts throughout the nation.

The Januvia pancreatic cancer lawsuit plaintiffs are suing Merck & Co. for reimbursement for medical costs, burial costs, and other damages because the pharmaceutical corporation knew or should have known that Januvia may result in this fatal form of cancer.

https://t.co/ncD3RSL0pm
Several uncommon but severe side effects of Januvia include:

Pancreatitis (Pancreatitis is an inflammation of the pancreas; symptoms include severe abdominal/back discomfort, #appetite #loss, and #chronic nausea/vomiting; Januvia. pic.twitter.com/YqYPiXejpc

According to much academic and post-marketing research, there may be an association between Januvia and pancreatic cancer. This association raises severe concerns because pancreatic cancer is one of the deadliest cancers due to its propensity for being in an advanced stage at the time of diagnosis and the shortage of efficient treatments.

The type 2 diabetes drug Januvia belongs to a group that slows the metabolism of incretin hormones, notably Glucagon-Like Peptide-1 (GLP-1). Because people with type 2 diabetes insufficiently produce GLP-1, Januvia prolongs the time these hormones are active in the circulation, lowering blood sugar levels.

In doing so, the medicine raises the activity of GLP-1 receptors in the user. The risk of pancreatic cancer could be increased by the same method of action.

The FDA amended Januvia’s prescribing label in September 2009 to reflect reports of severe pancreatitis linked to the medication.

The organization examined 88 occurrences of severe pancreatitis in Januvia users who used their system for reporting adverse events between 2006 and 2009. Fifty-eight needed to be hospitalized, and four ended up in the intensive care unit (ICU).

On June 11, 2011, after Merck & Co. failed to complete suggested animal research regarding the pancreatitis risk related to Januvia, the FDA threatened the business with consequences (sitagliptin).

The FDA mandated that Merck complete the trial and make the findings public by June 15, 2011, for Januvia to receive FDA approval. The FDA rejected Merck’s initial design proposal as insufficient, and the company never submitted a new procedure.

In March 2013, the FDA indicated that it would investigate new research that suggested individuals with Type 2 diabetes on Januvia and other similar diabetic medications might be at an elevated risk of developing pre-cancerous cells and pancreatitis.

These results were “based on the evaluation of a small number of pancreatic tissue specimens acquired from patients after they died from unclear causes,” the government stated.

Now you may have a question: has Januvia been recalled? The answer is no. In order to avoid shortages, the FDA is allowing the medicine to stay on the market for the time being.

Is There a Class-Action Lawsuit Pending?

In the Januvia lawsuits, no class action complaint has yet been submitted. The U.S. Judicial Panel on Multidistrict Litigation consolidated these Januvia lawsuits in federal court in California in 2013.

A federal court judge dismissed these complaints in 2021 because, in his opinion, the plaintiff’s attorneys had not provided sufficient scientific evidence to establish a connection between these diabetes medications and pancreatic cancer. A court of appeals, however, restored them. As of September 17, 2018, in the reopened MDL, there were 948 cases still pending.

As of October 2022, four hundred sixty-nine cases were still open.

The cancer-causing impurity known as nitrosamine, which has recently caused recalls for Zantac, metformin, valsartan, and several other medications, is present in some batches of the diabetes medication Januvia, according to federal health officials.

Following the cancer diagnoses of hundreds of former users of these recalled prescriptions, the manufacturers of Zantac and Valsartan are being sued for distributing tainted drugs.

On August 9, 2022, the Food and Drug Administration (FDA) released a public safety notification alerting the public that sitagliptin drugs were discovered to contain a nitrosamine known as NTTP.

NTTP is a member of the nitrosamine chemical class, which includes the recognized carcinogen N-nitrosodimethylamine.

The FDA was informed on August 18, 2022, by Merck & Co. that the medication Januvia contains nitrosamine. The FDA has opted not to pull the drug from the market due to concerns about a shortage despite Merck’s examination of the medication revealing nitrosamine levels that were greater than those permitted by the FDA.

Pharmaceutical companies must properly test their medicines for safety, notify the public of potential adverse effects, and follow FDA regulations. Merck disregarded these rules, effectively ensuring that people with diabetes would suffer harm or even perish.

Although there are no generic substitutes for Januvia, other companies produce medications that help type 2 diabetics better control their blood sugar levels. The drug’s patent protection will expire in January 2023.

In these Januvia lawsuits, damages for plaintiffs are being investigated, including lost wages, lower earning potential, and expensive medical costs.

How do You Know you are the Victim of Januvia Lawsuits?

You might be qualified to file Januvia lawsuits if you experienced pancreatitis, pancreatic cancer, or other side effects with the type 2 diabetes medication Januvia.

You must demonstrate the severity of your damages in order to be awarded the maximum Januvia lawsuit settlement amounts for your injuries. Contact LezDo techmed to review your medical records.

If a member of your own family or a close friend died as a result of complications from using Januvia, you might also be entitled to bring a wrongful death claim. You may obtain compensation through this Januvia cancer lawsuit for funeral costs, loss of companionship, pre-death medical costs, pre-death pain and suffering damages, and other related costs.

1/5 Januvia: Is it harmful?
Pancreatitis, a severe adverse reaction to Januvia that can be fatal in rare circumstances, is one of the drug’s severe side effects.#januvialawsuits #januviasettlement #medlegal360 pic.twitter.com/an2jDDFDpM