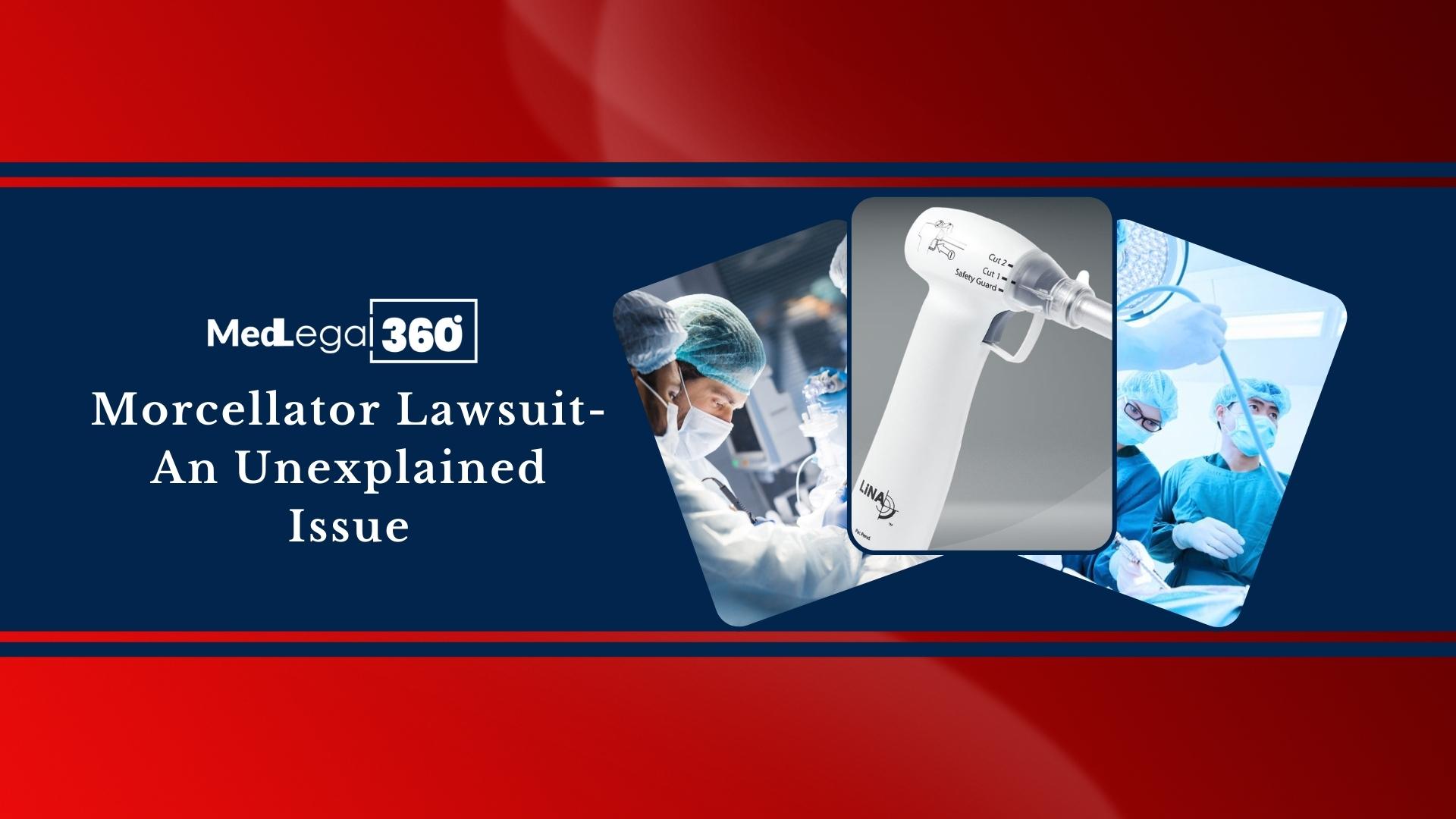 This indicates that thousands of women across the nation have this treatment done without being informed of the dangerous side effects of a power Morcellator hysterectomy or myomectomy.

This blog will explain what a Morcellator is and how it leads its manufacturers to face hundreds of Morcellator lawsuits. Also provided a piece of information on how to launch a solid claim against the manufacturers if you are experiencing Morcellator side effects.

Morcellators are Class II medical devices utilized during laparoscopic surgeries to divide tissues into tiny pieces so that the tissues can be extracted through a small incision site (typically 2 cm long or less).

Morcellation procedures were first introduced to the medical field in 1993. These devices are frequently used during hysterectomy treatment and myomectomy treatments.

Compared to an abdominal incision hysterectomy or myomectomy, laparoscopic procedures have a shorter post-operative recovery period and a lower risk of infection.

The first electric Morcellator received marketing approval from the U.S. Food and Drug Administration in 1991. The first laparoscopic Morcellator entered the market in 1995.

The FDA categorized the device as class II and approved it for sale under the 510(k) process. This procedure permits gadgets to be placed on the market for significant clinical testing.

The Cook Tissue Morcellator was the first of these devices to enter the market. Following Cook’s permission, Karl Storz and Johnson & Johnson issued their Morcellators.

These devices were similarly introduced to the market without any clinical testing. Since then, the FDA has authorized almost a dozen more devices. 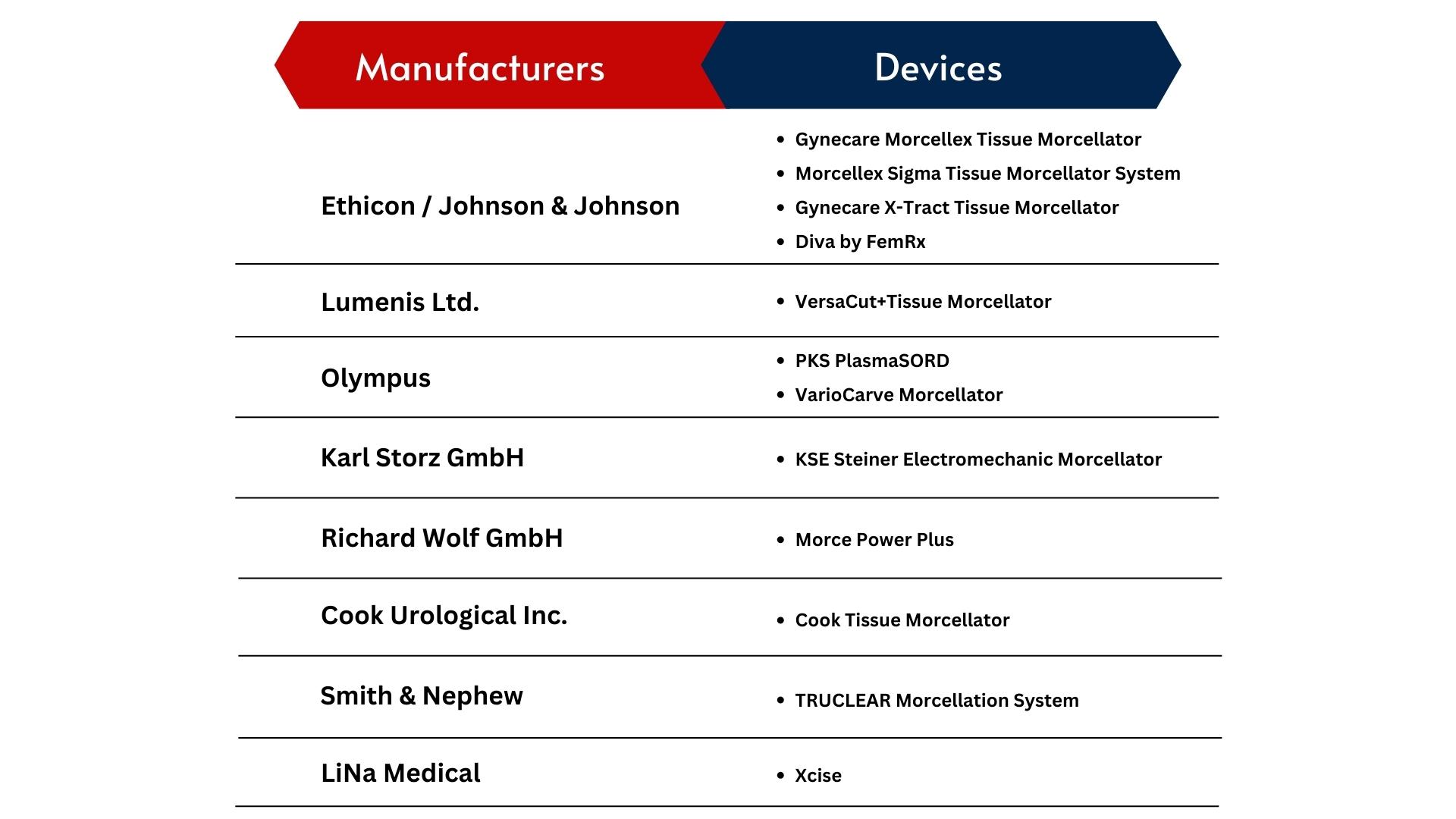 The Food and Drug Administration warned in 2014 that 1 in 350 women who had a hysterectomy or myomectomy was reported to have undiagnosed uterine cancer.

Power Morcellators have the potential to distribute cancerous tissue throughout the abdominal cavity and worsen cancer. This suggests that a tumor may advance from stage 1 to stage 4 following morcellation, making cancer more challenging to treat and lowering the likelihood of long-term survival.

Some hospitals prohibited the equipment after the FDA issued its original warning, and some insurance companies stopped paying for fibroid removal and hysterectomy using the power Morcellator. One of the biggest manufacturers of Morcellators, Johnson & Johnson, took their products off the market.

Are Morcellators still being used?

The FDA updated its 2014 recommendations for laparoscopic power Morcellators in 2017. The FDA did not suggest a ban or alter its guidance to physicians based on its results.

The FDA continues to suggest the use of laparoscopic power morcellation only for certain carefully selected women seeking myomectomy or hysterectomy surgeries and to use only restricted morcellation when necessary.

Power Morcellator side effects and complications

Surgery with a Morcellator has additional risks in addition to the threat of cancer spread. The Morcellators in surgery can infect even healthy fibroid tissue.

More fibroids may develop due to noncancerous fibroid tissue sticking to other abdominal organs and tissues.

Some common side effects associated with power Morcellator surgery include:

Are there any Morcellator lawsuits against the manufacturers?

The grieving families allege repeatedly that Morcellators spread cancer among women. There is also an argument that the manufacturers of laparoscopic power Morcellators must have known or should have known that these devices might allow hidden cancerous tissue pieces to spread throughout the body.

According to evidence in the court records, research on the potential for these devices to spread cancer was published as early as 1991.

The manufacturers should be aware of the lack of an effective screening procedure for uterine sarcomas, cancer that originates in the muscles and tissue of the uterus.

Some of the allegations against Morcellator manufacturers are:

According to reports, these companies are “responsible for negligence, irresponsibility, carelessness and willful, recklessness, unreasonable and flagrant disrespect for human life” since Morcellators may spread lethal cancer.

According to reports, these devices weren’t adequately tested before being sold by the manufacturers. Manufacturers were permitted to market Morcellators without clinical studies since they were approved under the 510(k)-clearance procedure.

Patients who are harmed through a surgical treatment may be eligible to sue their doctors, hospital, and health workers for medical malpractice. When performing surgery or giving medical advice, doctors and hospitals have a responsibility to their patients. When patients are injured after undergoing a surgery, a doctor’s professional carelessness may be to blame.

Women who suffer injuries after undergoing power morcellation myomectomies or hysterectomies should consider whether their doctor informed them of the procedure’s risks and performed the surgery with sufficient care.

Several women have died from cancer after having myomectomies or hysterectomies surgery using power morcellation. When a patient dies, the victim’s family members may be entitled to bring a wrongful death case to seek compensation from the manufacturers at fault.

Power Morcellator manufacturers may be held accountable for patient harm in a variety of product liability cases. It may be established that the manufacturer neglected to advise doctors and patients about the risks of utilizing power Morcellators.

Also, a court may find that power Morcellators were defectively constructed. Finally, a manufacturer may well be held responsible for patient harm due to a violation of product usage.

Following a diagnosis of uterine cancers with a high disease outcome, such as leiomyosarcoma, some women and their families brought legal claims against several Morcellator manufacturers. Within a year of their diagnosis, many of these ladies passed away.

Paduda had a hysterectomy in 2013 to get her uterus’ fibroids out. To remove the tissue, doctors utilized the tool to cut and shred it.

Before surgery, she had no symptoms of uterine stromal cancer, a rare and deadly cancer.

The Morcellator had spread cancer throughout her abdominal cavity, decreasing her quality of life and shortening her life expectancy, physicians found after the treatment.

Brenda Leuzzi of New York underwent a hysterectomy, and the surgeon utilized the Ethicon Morcellex Morcellator. Leuzzi was given an acute uterine leiomyosarcoma diagnosis soon after the operation.

In her Morcellator lawsuit petition, she claims that Ethicon neglected to inform her of the dangers, difficulties, and unfavorable effects of using the Morcellex Morcellator.

Israel Arama sued Johnson & Johnson, Ethicon, and Karl Storz on behalf of Esther Arama. Esther had a hysterectomy in 2011 with a power Morcellator to get rid of fibroids.

She complained to her doctor about severe stomach discomfort in May 2014. Her metastatic leiomyosarcoma was diagnosed during tests.

At the time of her morcellation operation, oncologists found the cancer was present and may have spread. In December 2014, she died following rigorous therapy treatment and several surgeries.

Following a hysterectomy with a Gyrus Morcellator, Lisa Nielsen brought a Morcellator lawsuit. Oncologists examined her abdomen a year after the surgery and discovered seven tumors.

Later, she found that the device had spread cancer from fibroids that had been removed surgically after being morcellated.

Nielsen said that she never received any warnings about the possibility of cancer spreading using the Gyrus Morcellator.

The Judicial Panel on Multidistrict Litigation (“JMPL”) approved the plaintiffs’ request to form a federal MDL in the District of Kansas in October 2015 following the filing of numerous lawsuits.

The court specifically designated Senior Judge Kathryn H. Vratil to preside over the combined or coordinated pretrial proceedings in the decision from October 15th.

Since the MDL was formed, additional cases have continued to be filed.

According to The Wall Street Journal, Johnson & Johnson has settled around 70% of the over 100 Morcellator cases it is facing. Individual Morcellator lawsuit settlement amount is believed to range between $100,000 and $1 million, depending on factors such as a woman’s age, overall health, and whether or not she has children.

LiNA Medical also settled a case for $800,000 in September 2015 before it went to trial, according to the court documents.

Am I eligible to file a Morcellator lawsuit?

You or your family member suffered or suffering from uterine cancers after the laparoscopic surgeries with Morcellator.

How can I file a Morcellator lawsuit?

Find a competent attorney who is knowledgeable about Morcellator litigation and has a lot of experience handling compensation claims. Before filing a Morcellator lawsuit, it would be ideal if you double-check the details of the Morcellator that was utilized during your laparoscopic surgery.

You also need to know the date of your surgery and the name of the manufacturer of your Morcellator.

Make sure your medical documents are accurate so that your lawyer can better understand your condition.
After having laparoscopic surgery with a Morcellator, a patient should seek medical help right away if they feel any symptoms or pain. If a Morcellator is to blame for the issue, this may help you with any allegations you make.

Medical records that are clear and concise might be used as reliable evidence in your Morcellator lawsuit. Attorneys are assisted in evaluating plaintiffs’ medical records by companies like LezDo techmed.

What is the deadline for filing a Morcellator lawsuit?

Have you ever had any problems with a medical device? Please tell us about your experience, and don’t forget to let us know what you think of this blog.