Opioid Lawsuits: Is it high time to bridle the opioid crisis? 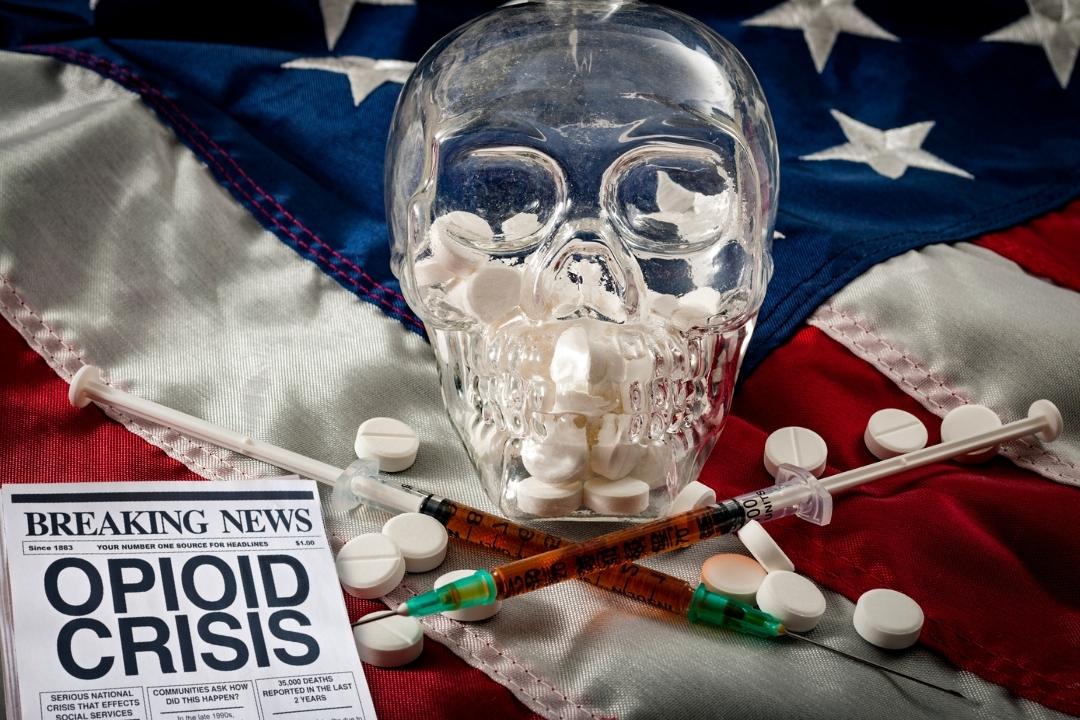 Do you know? there have been more than 3,000 opioid lawsuits filed in the United States now. Since the opioid overdose had claimed more than a million lives in the U.S alone, there arose a necessity for opioid litigations to bridle the opioid crisis that’s still claiming lives.

Some of you might be wondering what’s the opioid epidemic. It’s nothing other than the addiction to opioids. When more people worldwide become addicted to opioids, it’s considered a crisis that’s slowly taking away the lives of millions. When it started wrecking the lives of Americans, the authorities became aware of the epidemic.

When there was a rise in the death toll, an increase in infectious diseases like HIV and Hepatitis C, and a spike in opioid use disorder in the U.S, the Trump government announced the opioid crisis as a Public Health Emergency on October 26, 2017.

The losses due to the opioid epidemic even eclipsed the COVID pandemic deaths. In a way, the pandemic also has added its part to the mortality rate due to opioid overdose.

Let’s probe into the harsh realities of the opioid epidemic and the measures taken to harness it after many started filing opioid lawsuits, which have become the lion’s share in the pharma lawsuits rocking the U.S in recent years.

What is an opioid?

Medically, an opioid is a medicine used as a pain reliever and anesthetic. This will have an effect similar to morphine on the opioid receptors in the nerve cells. Some opioids are more potent than morphine. Physicians prescribe opioids to people who undergo chronic pain as pain medications. Those who undergo cancer treatment are more prone to addiction as they use opioids permanently to subside their agony.

The Alcohol and Drug Policy Commission clearly differentiates opioids and opiates. Opiates are chemicals extracted from poppy plants. Opium, codeine, heroin, and morphine are some of the opiates. Whereas, Opioids are synthetic molecules produced in the labs. Loperamide, Dextropropoxyphene, Oxycodone, Meperidine, Fentanyl, and Hydrocodone are some of the synthetic opioid drugs used as medications in the U.S.

Nowadays, many people use the term opioids to refer to both opioids and opiates. Both drugs are used as pain medications to treat persistent pains. When most of the opioids used as medicines reach the shelves legally all over America, some drugs like heroin are sold illegally under the shadow.

Opioid Addiction or Opioid Use Disorder

On hearing the word addiction, you may think about illegal drug consumption like opium or heroin. However, when consumed without knowing the prescribed usage and frequency, the pain medications will also lead people to become addicted to them. Prolonged usage will influence the brain and create a craving for opioids. The uncontrollable craving to use opioids is known as Opioid use disorder.

Opioid addiction can be the concomitant result of complications of the medicine, unknowingly using more dosages due to ignorance, intentional use, or a medical error due to the negligence of the physician or the pharmacist.

The following opioid list gives you some of the most prominent medications that make people addicted when used excessively. 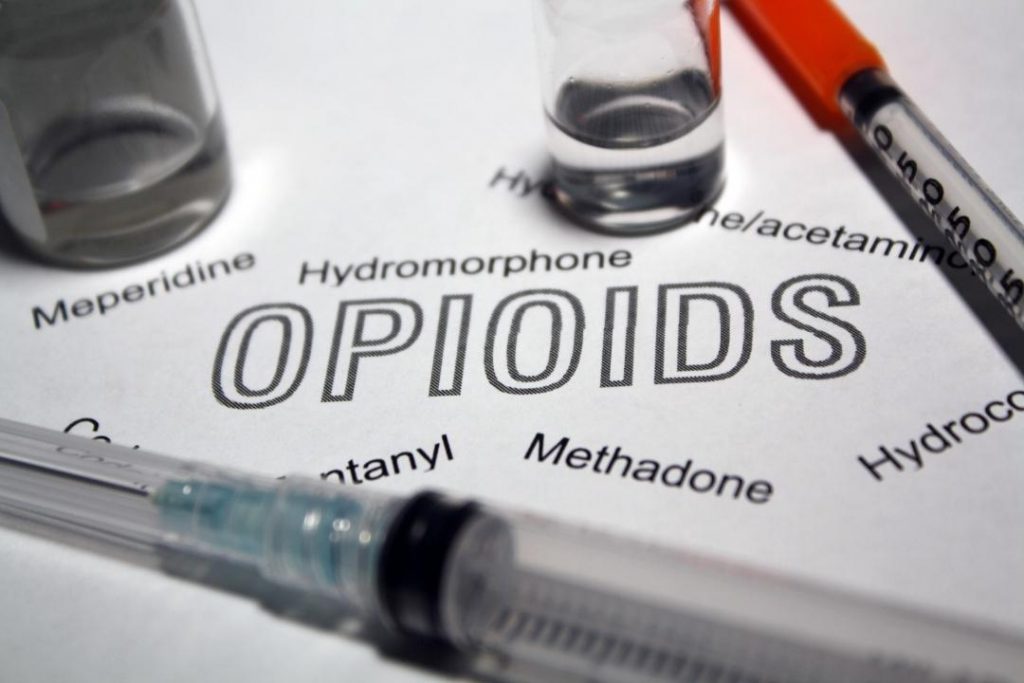 Opioids trick the G-protein and transmembrane molecules in the brain cells from detecting pain and give a feeling of pain reduction. Pain medications are unavoidable for people who suffer from chronic illnesses. However, when excessive consumption of opioid medications affects the normal behavior of a human being, it becomes a matter of concern.

The people who use non-prescribed opioids are, in a way digging their own graves. This kind of substance abuse will have dire consequences on the person’s physical, behavioral and psychological aspects. Let’s see some of the signs of opioid overdose below.

These opioid overdose signs forewarn the necessity for opioid treatment.

Opioid analgesic overdose becomes toxic to the body and mind and can be detected in urine drug tests. Opioid toxicity can be treated with drug therapies, where an opioid agonist, opioid antagonist, or opioid agonist-antagonist is used.

To patients with less severity, no treatment is given. Abstaining completely from the use of an opioid is a natural way known as cold turkey in dealing with the use of opioids. Some may follow the slow tapering of the opioid by reducing the frequency and dosage. Others may stop it immediately.

People affected with severe opioid withdrawal can be treated with opioid antagonists like methadone or buprenorphine. Medication continued with proper monitoring would relieve the effects of the withdrawal. These medicines deceive the brain into thinking that they are still under their usual opioid but control withdrawal symptoms.

In April 2021, FDA approved an 8-milligram naloxone hydrochloride nasal spray to treat opioid overdose toxicity. Earlier, lower doses of Naxalone were used. Naxalone quickly acts on the patients and brings them back from their unconsciousness.

In people with severe respiratory depression, oxygen is provided to relieve them from the strain. Then Naxalone is administered to reduce the opioid effects and bring them back to normal. 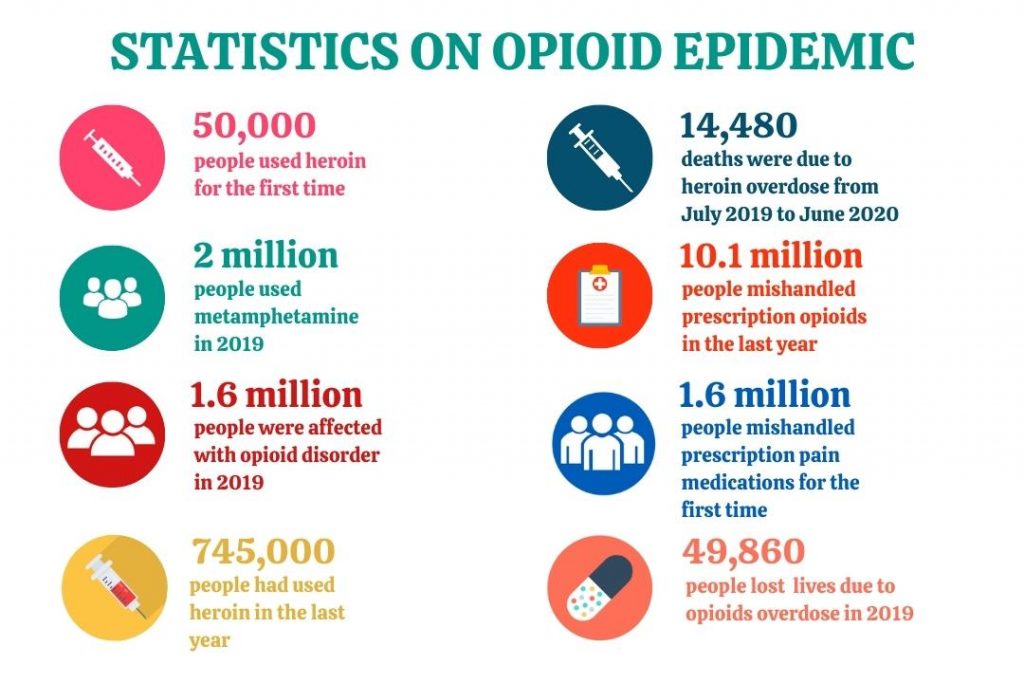 The American Medical Association (AMA) has taken immense measures to reduce the rate of prescribing opioids to patients. Thanks to the efforts taken by AMA, there has been a 44.4% decrease in opioid prescriptions in the last ten years. However, the sad truth is that opioid-related deaths are alarmingly rising, despite all these endeavors spawning new opioid lawsuits now and then. Mainly that’s because of the illicit use of methamphetamine, fentanyl, and cocaine.

AMA has formed a task force to control Opioid Abuse in America. It insists that some guidelines be followed. Physicians and other health care professionals should create awareness among patients about the use of prescription opioids. Since many people use opioids getting from their family and friends without a physician’s prescription, the danger of opioid abuse or death could not be evaded. Medicines should be out of the reach of your Lil ones. Pharmacies and patients should discard expired and unused opioids. Collection sites or drop boxes should be made available to get them back.

There is always an uproar among the people against government agencies for failing to restrict the preventable opioid crisis.

A post shared by The Opioid Spoon Project (@theopioidspoonproject)

To protect the citizens against opioid overdose disorder and death, even the state governments, local governments, and hospitals have filed opioid lawsuits against the Pharmaceutical titans. For misleading the physicians and patients, the erring pharma companies are forced to face product liability lawsuits.

On Sunday, the billionaire Sackler family, controllers of Purdue Pharma, declared the business bankrupt in the face of $12bn in lawsuits brought against the maker of the prescription drug OxyContin. https://t.co/EfKRA70SDW pic.twitter.com/GfFaUxT4LQ

In 2019, the pharma giant, Purdue Pharma, owned by the Sacklers, filed for bankruptcy after facing around 3000 opioid lawsuits arising from the adverse side effects of Oxycontin. The pharma company was dissolved, and the Sacklers agreed to pay $4.5 billion to the opioid addiction and prevention program. The new pharma company formed should spend part of its future turn over to opioid addiction treatment. With the declaration of bankruptcy, they got immune from future litigations.

In 2020, Mallinckrodt filed for bankruptcy to avoid the looming lawsuits.

The drugmaker, one of the highest-volume opioid producers in the U.S. at the height of the nation’s prescription drug crisis, announced in February a tentative $1.6 billion settlement to avert hundreds of lawsuits. https://t.co/SR087cbIyP

In June 2021, Insys Therapeutics filed for chapter 11 bankruptcy and agreed to pay $225 million as an opioid settlement after agreeing to plead guilty. The under-the-tongue fentanyl spray Subsys was sold to BTcP Pharma LLC on a condition to restructure the highly infamous drug and make it safe for use.

McKinsey & Company, a consultant company to different governments and corporates, was sued for promoting the sale of Purdue Pharma’s Oxycontin and indirectly contributing to the opioid epidemic. An opioid settlement of around $600 million was agreed to compensate for the opioid lawsuits in around 47 states. It was found guilty for its role in deceiving the physicians of the risks of Oxycontin, even after Purdue Pharma admitted its fault.

The pharma companies are not ready to take the blame wholly on themselves, saying that the illicit black market sale of opioid pills too contributed to the opioid epidemic. However, they cannot escape from the class-action lawsuits and mass tort litigations filed against them. 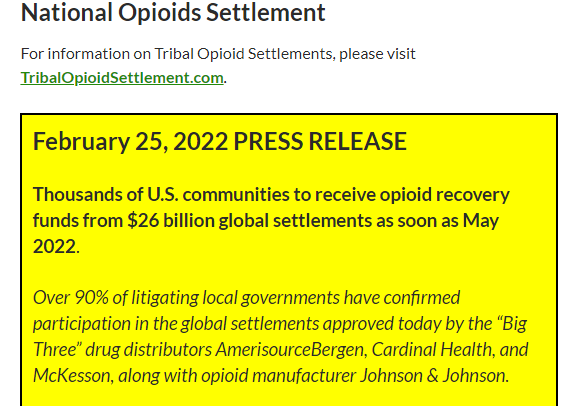 The video below discusses more on this settlement.

The beginning of 2022 saw a welcome change in opioid lawsuits, with a number of them reaching settlements like the tribal opioid settlement. Let’s wait and see what happens with the opioid lawsuits in 2022. West Virginia reached an agreement with Janssen Pharmaceuticals Inc., a subsidiary of Johnson & Johnson, in April 2022. Janssen Pharmaceuticals Inc. will pay them $99 million for their role in the opioid epidemic.

In April 2022, Teva and AbbVie’s Allergan unit reached an agreement with the hard-hit state of West Virginia, the latest in a line of pharma opioid settlements with $161 million in cash and drugs. Teva will supply the state with $27 million in overdose reversal drug Narcan under the terms of the agreement and $83 million in cash in the Teva opioid lawsuit settlement. Allergan would pay the remaining $51 million. The funds will be distributed over a ten-year period by the companies.

The opioid lawsuits filed by San Francisco against Walgreens and other pharmaceutical companies are scheduled to go to trial by the end of April 2022.

Idaho has reached a $119 million settlement with Johnson & Johnson and three major distributors regarding their roles in the opioid crisis. The money will be used to address the damage the state has faced due to the opioid crisis.

In May 2022, Walgreens Boots Alliance reached a $683 million settlement with Florida in the claims made against the company for its role in exacerbating the country’s opioid crisis. The company agreed to pay Florida $620 million over 18 years, plus a legal fee of $63 million. During the settlement, they refused to admit their mistake. Previously, they refused to participate in the combined settlement agreement of $878 million with the state that included CVS.

As per the latest update in early June 2022, North Carolina has received the first set of payments from the $26 billion National Settlement.

Do you know someone who uses pain medications whenever they feel even the slightest pain? Is there a craving to take opioids even when it’s not necessary? Consult a pain management specialist to learn about the correct usage and side effects of the opioid they’re taking. Since the overuse of opioids results in voluminous opioid lawsuits, it’s high time to take some preventive measures.

Though most opioid side effects are not life-threatening, the extreme cases where behavioral changes and suicidal tendencies are explicit must not be overlooked. Medication plus rehabilitation programs should be continued to control opioid addiction syndromes.

The restriction on the production and sale of opioids will trigger the sale of illicit drugs on the black market, increasing the death toll. Therefore AMA insists on evidence-based care for people who undergo Substance Use Disorder. Based on the instruction given by AMA, physicians and Health care professionals have reduced prescribing opioids to patients. They concentrate more on the use of the state prescription drug monitoring programs (PDMPs).

After all these measures taken by all, whether we could curb the opioid epidemic is still a question mark. With the continued effort of AMA, the state and federal lawmakers, stakeholders, and physicians, let’s hope the opioid crisis will come to an end very soon. Let’s hope for the forthcoming year to see fewer opioid lawsuits.