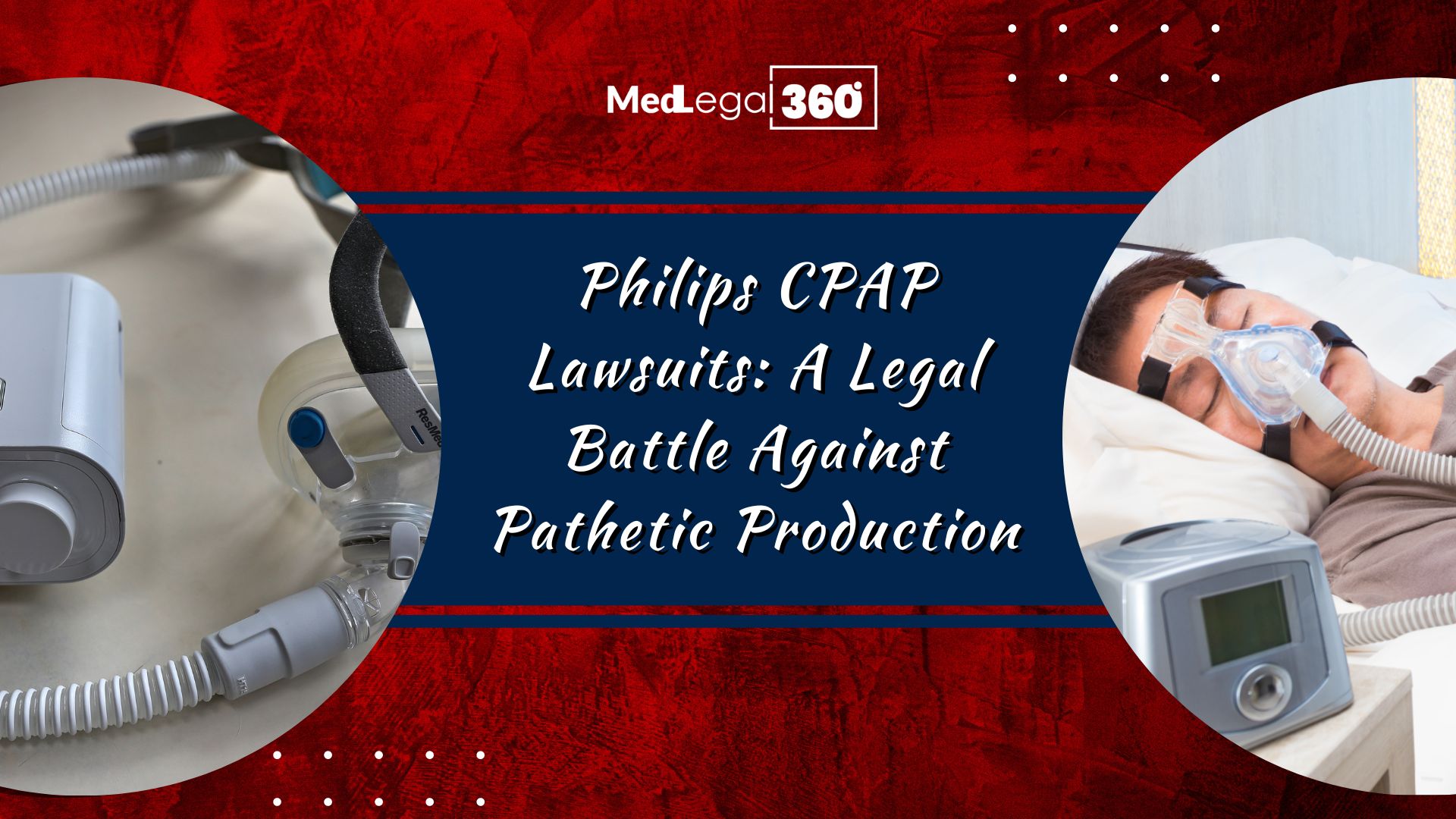 How Do CPAP Machines Work?

A CPAP (Continuous Positive Airway Pressure) is a piece of sturdy medical equipment used to treat obstructive sleep apnea. Sleep apnea, a common condition, can cause breathing to become very shallow or to stop entirely when a person is asleep at night.

People with sleep apnea abruptly cease breathing while asleep, but the device gives pressurized air to the user through a hose and mask system. The airflow keeps the airway open and enables more frequent breathing while sleeping.

The CPAP devices include an insulating foam type that tends to degrade over time and enter users’ airways, posing severe health risks. People who have used a CPAP machine and had injuries may file Philips CPAP lawsuits and are entitled to seek a Philips CPAP lawsuit settlement for their losses.

All Philips Respironics ventilators, BiPAP, and CPAP equipment produced between 2009 and April 2021 are currently being recalled, per the FDA directive.

Philips recalled these machines because the foam, which controlled the machines’ sound level and reverberation, was degrading and had entered the air channel of the apparatus. It got worse since there was a chance of releasing hazardous substances during the deterioration and the possibility of authentic foam pieces getting into a user’s respiratory system.

In June 2021, millions of CPAP, BiPAP, and ventilator equipment were affected by the Philips recall because the sound-reducing foam might expose users to cancer-causing substances. Putting it simply, using the recalled equipment might be very risky.

In its most recent report, published on Nov. 22, the U.S. Food and Drug Administration said that it has received more than 90,000 medical device reports, or MDRs, related to recalled CPAP, BiPAP, and ventilator devices. There are 260 reports of deaths in all.

Which Devices Have Been Recalled?

There were almost 15 million devices subjected to the recall. A variety of devices with various model names and numbers were among the specific machines recalled. About 80% of the 3-4 million Philips products identified were CPAP machines. Due to the CPAP equipment safety recall, attorneys have filed Philips CPAP lawsuits. The following machines were among those recalled:

The recalled products were made by Philips NV, based in Amsterdam, Netherlands, and has headquarters in the U.S. State of Delaware. It researched, developed, designed, produced, sold, distributed, and promoted CPAP units and other devices, including BiPAP units, used to treat respiratory failure and breathing diseases.

On June 14, 2021, Philips stated that it recalled certain BiPAP and CPAP machines and other ventilators due to potential health hazards with polyurethane foam made from polyester used in the equipment to decrease sound and vibration. Foam can crack and go into the air of the device channel, where particles or specific chemicals might be ingested or breathed in and have hazardous or potentially cancerous consequences.

What Can Potentially Happen to Recalled CPAP Users?

Philips CPAP devices were recalled because chemical vapors in the sound-dampening foam were absorbed by patients when they slept. Numerous compounds in these foam particles are recognized as human carcinogens, and some have even been linked to cancer and respiratory problems.

When the foam in CPAP machines degrades, it can emit particles or chemicals that can lead to:

According to Philips’ recall notice, possible side effects of foam particle exposure include headaches, itchiness, inflammation, respiratory problems, and cancer. Pneumonia, asthma, other respiratory issues, infection, cough, dyspnea, dizziness, nodules, and chest discomfort are among the injuries reported to the FDA.

There is also early proof of a link between the use of the recalled CPAP machines and increased risks of various forms of cancer, based on research already conducted on the health impacts of the chemicals in the CPAP foam. Different cancer forms might connect to the recalled CPAP equipment depending on how long a person uses a CPAP machine.

Reasons Why PE-PUR Foam May Have Adverse Effects

Due to the chemicals in the foam, PE-PUR foam may have adverse consequences. Philips discovered at least five hazardous compounds in lab experiments to be present in foam particles and gases emitted by deteriorated foam. Volatile organic compounds, often known as VOCs, are chemical gases produced by foam.

The business learned that some of the recalled devices’ airway circuits had black particles. However, the foam can already spew dangerous chemicals even if you cannot see any particles.

Why Were Philips CPAP Devices Recalled?

More than 1,200 Philips Respironics lawsuits have been filed against Philip’s positive airway pressure equipment, and at least 100 injuries have been documented. According to the company, degraded PE-PUR foam might release dangerous odors and dark particles that customers could breathe in or swallow. People with sleep apnea are looking for alternatives to Philips CPAP due to the recall and health hazards.

On September 1st, 2021, the CPAP  device maker said it would replace or repair recalled products, although the procedure may take a year to finish. However, an FDA CPAP latest update published on November 12, 2021, discovered that the new foam being used in replacement machines could also be unsafe. Additionally, according to the agency’s inspection report, Philips knew that the PE-PUR foam used in its breathing devices might deteriorate as early as 2015.

Unsealed court records from June 2022 showed that Philips had been aware of the issue for at least three years before the recall. According to Bloomberg, an engineer said he received complaints about “disintegrating polyurethane” that got into the machine’s airways.

Philips updated their PE-PUR foam testing results in the same month. According to the firm, the number of chemical vapors emitted by the foam was not anticipated to be a concern.

The CPAP Recall: How Serious is it?

The recalled products were given a Class I classification by the U.S. Food and Drug Administration, which is the most dangerous and may result in severe injury or death.

When there is evidence that a device may have contributed to or been the cause of a death or other significant injury, manufacturers like Phillips are obligated to submit medical device reports to the FDA. Philips filed 30 reports between 2011 and April 2021.

The FDA revised its safety statement about the CPAP and BiPAP ventilators from Philips on August 16, 2022. According to the government, since April 2021, the organization has received more than 69,000 reports on medical devices. The FDA detected 168 cases of deaths connected to the breakdown of PE-PUR foam among approximately 69,000 medical issues.

The FDA received 21,000 reports, including 124 instances of deaths, all connected to foam disintegration between April 2021 and April 2022. The reports came from Philips, doctors, patients, consumers, and health care.

The FDA received 48,000 additional reports of adverse events involving injuries between May 1 and July 31 that were thought to be connected to the breakdown of sound foam particles in the recalled Philips CPAP and BiPAP devices. The report included forty-four new recorded deaths linked to Philips’ equipment.

Over 300 Philips CPAP and BiPAP claims are continuing as of August 2022 in a multidistrict action in federal court. More Philips CPAP lawsuits are being filed, and those who filed them early claim that Philips’ recall was handled too slowly.

Users of the recalled devices have filed many product liability claims, and consumers of Philips have filed a Philips CPAP class action lawsuit against Philips due to the CPAP safety recall. According to the allegations, Philips knew a problem with foam particles being breathed. However, the company did absolutely nothing about it.

Since the recall was issued, the manufacturer has been the target of Philips CPAP lawsuits that claim the corporation knew or ought to have known about the potentially deadly health hazards associated with CPAP equipment but did nothing to alert doctors or patients. According to the Philips CPAP machine lawsuits, the business has been using foam that has been declared potentially harmful since 2009. The defect of the design and failure to warn claims are at the core of the Philips CPAP lawsuits.

According to a report from the FDA Manufacturer and User Facility Device Experience, the manufacturer had information from a patient who noticed black dust on her nose after using the device as early as 2011. Before the 2021 recall, other gadget owners posted complaints about black particles on Internet message forums for several years.

Although the origin of the symptoms has not yet been conclusively established, Philips Respironics has received complaints from consumers of its mechanical ventilators, BiPAP, and CPAP devices.

Because so many Philips CPAP lawsuits were filed about CPAP equipment, multi-district litigation was established to handle them. MDLs consolidate several complex claims before a single judge in a single court. The U.S. District Court of the Western District of Pennsylvania is where the Philips CPAP lawsuits MDL is being handled.

Judge Joy Flowers Conti recently issued an order establishing specific starting deadlines for the parties to submit collaborative plans for managing different discovery concerns in the Philips CPAP Recall MDL. The judge wants to forward this case precisely what the victims desire. Philips is more likely to settle the CPAP legal cases with a fair CPAP machine lawsuit settlement offer the closer the CPAP lawyers get to a trial date.

Plaintiffs and defendants submitted a joint motion on August 23 asking the court to approve a census registry scheme asking prospective claimants to fill out a brief census form and provide basic health information. The statute of limitations will be extended for specific claims, much like a previous tolling arrangement currently being terminated.

The request was granted in a pretrial order that Judge Conti issued on September 14 and said that the census registry scheme would take the place of the existing tolling arrangement. On September 20, 2022, a census registry established by the court will assist in compiling a list of Philips CPAP machine recall lawsuits that are now being looked into by attorneys and extend the deadline for filing cases.

Only 323 Philips CPAP claims are pending before Judge Conti, according to the most recent docket report provided by the U.S. Judicial Panel on Multidistrict Litigation (JPML). However, between 2022 and 2023, it was anticipated that the Philips CPAP lawsuits’ size and breadth would quickly grow.

What Damages May be Recovered Against Philips CPAP lawsuits?

Are You Eligible to File a CPAP Sleep Apnea Machine Lawsuit?

You may be entitled to compensation from a Philips Respironics recall lawsuit if you used a Philips sleep apnea machine and, as a result, developed cancer.

Depending on where you reside, there could already be an active class-action case against Philips in your location. Your lawyer may guide you throughout the process if you are qualified to join a class action lawsuit.

5/5 Only 323 Philips CPAP claims were recently pending before U.S. District Judge Conti.
The number of Philips CPAP lawsuits is expected to expand rapidly between 2022 and 2023.https://t.co/UmeeEJauvb