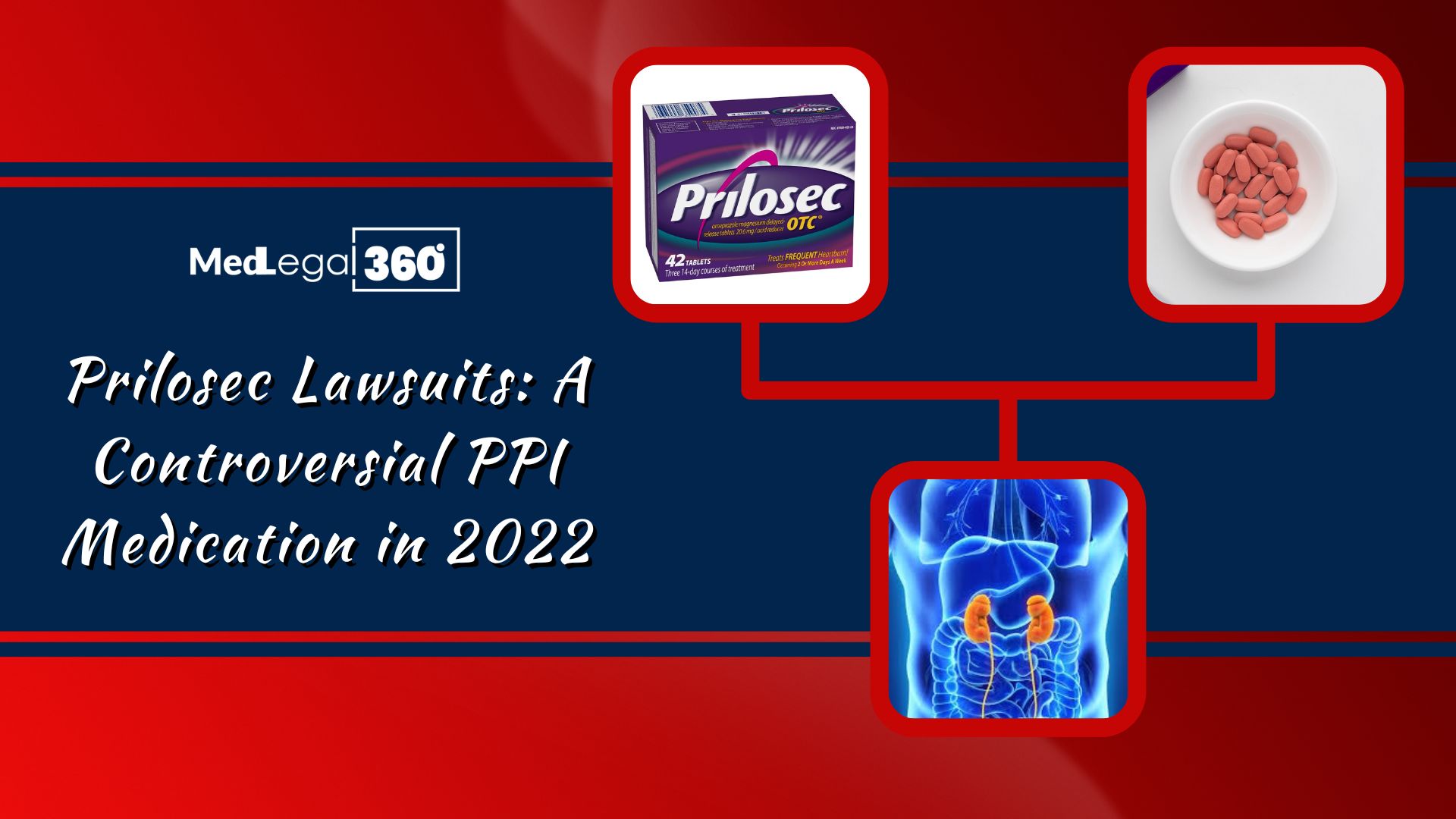 In Prilosec lawsuits, AstraZeneca was accused of mass tort for negligence in alerting physicians and patients about the fatal adverse effects of the acid reflux medication Prilosec.

Through this blog, you will understand what Prilosec is and the Prilosec lawsuits faced by AstraZeneca and other proton pump inhibitor medication manufacturers, and it will finally assist you in filing a Prilosec lawsuit against the firm if you are one of the victims.

Prilosec (Omeprazole) is a medicine used to treat,

It diminishes the gastric acid secretion produced by your stomach. It reduces symptoms such as coughing, heartburn, and difficulty swallowing.

Prilosec is also used to prevent upper gastrointestinal bleeding in high-risk patients. Omeprazole is a proton pump inhibitor, which is a type of medication.

Proton-pump inhibitors (PPIs) are a type of medication that causes a significant and long-term decrease in stomach acid production. They achieve this by irreversibly blocking the hydrogen potassium ATPase (H+/K+ ATPase) proton pump in the stomach.

Omeprazole was initially manufactured in 1979 by the Swedish AB Hassle, a branch of Astra AB. Omeprazole was introduced as an ulcer treatment in Sweden by Astra AB, which later changed its name to AstraZeneca.

In the United States, it was initially introduced into the market in 1989 under the brand name Losec. It was the very first proton pump inhibitor.

In 1990, the U.S. Food and Drug Administration recommended changing the brand name Losec to Prilosec. Esomeprazole (Nexium) was introduced by AstraZeneca as a patentable substitute medication for Prilosec after its U.S. patent expired in April 2001.

As AstraZeneca’s global patents began to fall, a number of companies released generic versions that are marketed under various brand names.

Omeprazole is a generic medication that is an exact duplicate of the active ingredient in the brand-name Prilosec.

The generic drug is said to be just as safe and effective as the brand-name medication. Moreover, generics are less expensive than brand-name drugs.

Prilosec is generally considered safe during pregnancy, but it should be taken in consultation with your doctor to avoid complications.

However, sufficient well-controlled studies on the use of Prilosec in pregnant women are lacking. The FDA recommends that the medicine be used only when the benefits outweigh the risks.

Some of the more common and significant Prilosec side effects include:

More than one out of every 100 people experience these common omeprazole side effects.

Some of the more intense side effects of Prilosec are:

Serious side effects are uncommon, occurring in only one out of every 1,000 people. These side effects are similar to those of other proton pump inhibitor pills, including Nexium, Dexilant, Aciphex, and Protonix.

The most severe and common side effect that Prilosec and other proton pump inhibitor pills cause is Kidney failure. This may happen if you have been taking Omeprazole for an extended time.

As early as 2002, questions about Prilosec’s safety began to emerge. The findings of the research are even more concerning because they indicate that the danger to people who consume Prilosec may worsen over time.

Bone Fractures: According to research from 2006 that was published in the Journal of the American Medical Association (JAMA), long-term Prilosec use increases the risk of hip fractures, especially in elderly people. The FDA emphasized an earlier precaution and issued a new warning to consumers in 2010, indicating that Prilosec may increase the risk of bone fractures.

Blood Disorders: The FDA also issued a warning in 2011, but this time it was about the possible long-term impacts of Prilosec contributing to hypomagnesemia. The effects of low blood magnesium levels on the heart, muscles, and nervous system are possible.

Is there a lawsuit against Prilosec?

After a JAMA (Journal of the American Medical Association) publication that examined renal disorders and PPIs in February 2006, the Prilosec lawsuits began to gain momentum.

According to the study, people taking proton pump inhibitors like Prilosec had an increased chance of developing chronic renal disease. The study also indicated that chronic renal illness was most likely to affect long-term users of PPI.

The unfortunate part of this is that, according to the research, nearly 15 million Americans use proton pump inhibitors. According to Johns Hopkins University researchers, up to 25% of long-term users may be able to stop using the medicine without experiencing increased acid reflux or heartburn.

The drug company was charged for poorly informing doctors and patients about Prilosec. Almost 12,775 lawsuits are still pending in the MDL as of July 2019.

In May 2016, Harry Mason of Madison County, Illinois, filed the initial federal case regarding kidney illness against AstraZeneca in the Southern District of Illinois.

The pharmaceutical corporation allegedly received reports about Nexium’s connection to kidney damage as early as 2004, yet continued to aggressively advertise the medication without changing its warning label.

According to Mason’s proton pump inhibitor complaint, he started taking the drug in 2006 and, as a result, developed a chronic renal disease and kidney failure. He could only live after a kidney transplantation.

According to his complaint, he requested both punitive and exemplary damages in addition to actual and compensatory losses. As per the court documents, Mason voluntarily dropped his Nexium claim in March 2017.

Koon started taking the drug in 2010 and kept doing so until 2013. End-Stage Renal Disease (ESRD) developed in her. Without a kidney transplant or ongoing dialysis therapy, people with ESRD will die.

In her initial complaint for her proton pump inhibitor case, Koon requested $10 million. She stated that she experienced “physical pain and mental suffering, including impaired enjoyment of life, as well as the necessity for lifetime medical treatment, monitoring, and/or medicines” as a result of the kidney injury.

After using Prilosec for “several years,” Penelope Costamagna of California developed renal failure and needed a kidney transplant. In February 2017, she filed a Prilosec lawsuit against AstraZeneca.

When tests revealed that Costamagna suffered kidney damage in November 2016, she stopped taking the medication. She claimed in her complaint that until doctors found her injury, she was unaware of any harm to the health of her kidneys.

Karen Vertrees, a resident of Tennessee, filed a lawsuit against Takeda Pharmaceuticals in 2017, alleging that the company’s Dexilant and Prevacid caused her acute and chronic kidney impairment.

In her case, she stated that between 2001 and 2014, she received prescriptions for both proton pump inhibitors from Takeda Pharmaceutical “on multiple occasions.”

She would not have taken the medications “if she had been properly informed of the kidney risks connected with consumption of these PPIs,” according to the complaint in her Prevacid and Dexilant lawsuit.

In 2017, Tennessee resident Karen Vertrees filed a lawsuit against Takeda Pharmaceuticals, alleging that the company’s proton pump inhibitors, Dexilant and Prevacid, were to blame for her acute and chronic kidney impairment.

Between 2001 and 2014, according to her lawsuit, she received prescriptions for both proton pump inhibitors made by Takeda Pharmaceutical.

She would never take Prevacid and Dexilant together if the company properly warned her about the risks of those medications, according to the complaint in her claim.

Numerous people from across the U.S. have suffered similar kidney problems from taking Prilosec. There are currently more than 4,000 lawsuits filed in New Jersey in the proton pump inhibator multidistrict litigation, and Prilosec is one of the products at issue.

The MDL doesn’t target one specific Proton-pump inhibitors drug. Instead, plaintiffs have brought product liability claims after taking one among several different PPIs, including:

Which drug companies are named in the MDL?

Several pharmaceutical companies develop, manufacture, and market PPIs within the U.S., Many of those companies, are named as defendants in lawsuits consolidated within the MDL. These include:

The lawsuits for kidney problems from all PPIs, including Prilosec lawsuits, are consolidated into an MDL within the District Court of New Jersey.

January 19, 2022 Update: In the class action lawsuit, there are currently 13,314 PPI complaints filed by victims seeking compensatory damages. These legal actions involving not only Nexium but also Prilosec, Protonix, Prevacid, and Dexilant.

March 1, 2022 Update: The judge set the initial Nexium bellwether trial for October because of the Nexium/Prilosec Proton Pump Inhibitor MDL having over 13,000 cases still pending. It will be the first of three PPI bellwether cases that take place between October and March of the following year.

April 20, 2022 Update: The people involved in the Nexium-Prilosec PPI class action MDL have been ordered to begin preliminary trial preparation in October for a large contingent of 200 cases.

September 10, 2022 Update: The main bellwether test trial in James Reider’s case will take place the following month. AstraZeneca, the defendant, filed petitions in legal terms last month in order to get ready for the approaching trial.

The petitions aim to limit or exclude the evidence of particular facts and expert witnesses that the plaintiff intends to present. The date of the hearing on these motions was September 19, 2022. The outcome of the Reider test trial will have a big impact on how the PPI-cause an MDL plays out in the long run. Next year, there will be two more test trials.

AstraZeneca paid a $7.9 million fine to the US Department of Justice in 2016 for participating in a kickback scheme involving the sale of Nexium and Prilosec.

In 2003, AstraZeneca was accused by the European Commission of providing false and misleading information in order to protect its Losec patent (sold in the U.S. as Prilosec). Following a two-year investigation, the Commission fined AstraZeneca €53 million (approximately $67.5 million USD).

A Maryland man is seeking compensation from the makers of Nexium and Prilosec, alleging in a new lawsuit that the popular heartburn drugs caused him to develop stomach cancer. pic.twitter.com/tOI4mwb8cf

Filing a personal injury lawsuit against AstraZeneca and joining the MDL will be the most effective way to quickly recover the compensation that you simply get for your injuries, you can claim for:

Can I file a Prilosec lawsuit?

Patients suffering kidney damage or other adverse medical effects after taking Prilosec could be able to file a Prilosec lawsuit.

If you have been injured by taking the medication, a time limit called a statute of limitations, determines how long you have to file a claim, but this point varies depending on where the injury occurred within the country.

Talking with an attorney well before a statute of limitations expires can let your lawyer gather the evidence necessary to put together your best claim for compensation.

Numerous claims have been filed against the manufacturers of Prilosec and other PPIs, alleging they didn’t warn that using PPIs could cause kidney failure. Additionally, several claims argue that

Before filing a lawsuit, you should gain more knowledge about the manufacturer of the PPI medication you consumed.

If you or a loved one develop a serious complication after taking Prilosec, you must find the best lawyer with extensive experience in legal claims. You also need an error-free medical record to make your Prilosec lawsuits more significant.

To maintain a clear medical record, you can prefer the top medical record review companies like Lezdo techmed, which will be very effective for you to receive more genuine compensation for your Prilosec lawsuits.

Don’t forget to share your thoughts and opinions about this blog with us.