Side effects of Lexapro – Are you depressed with the antidepressants? 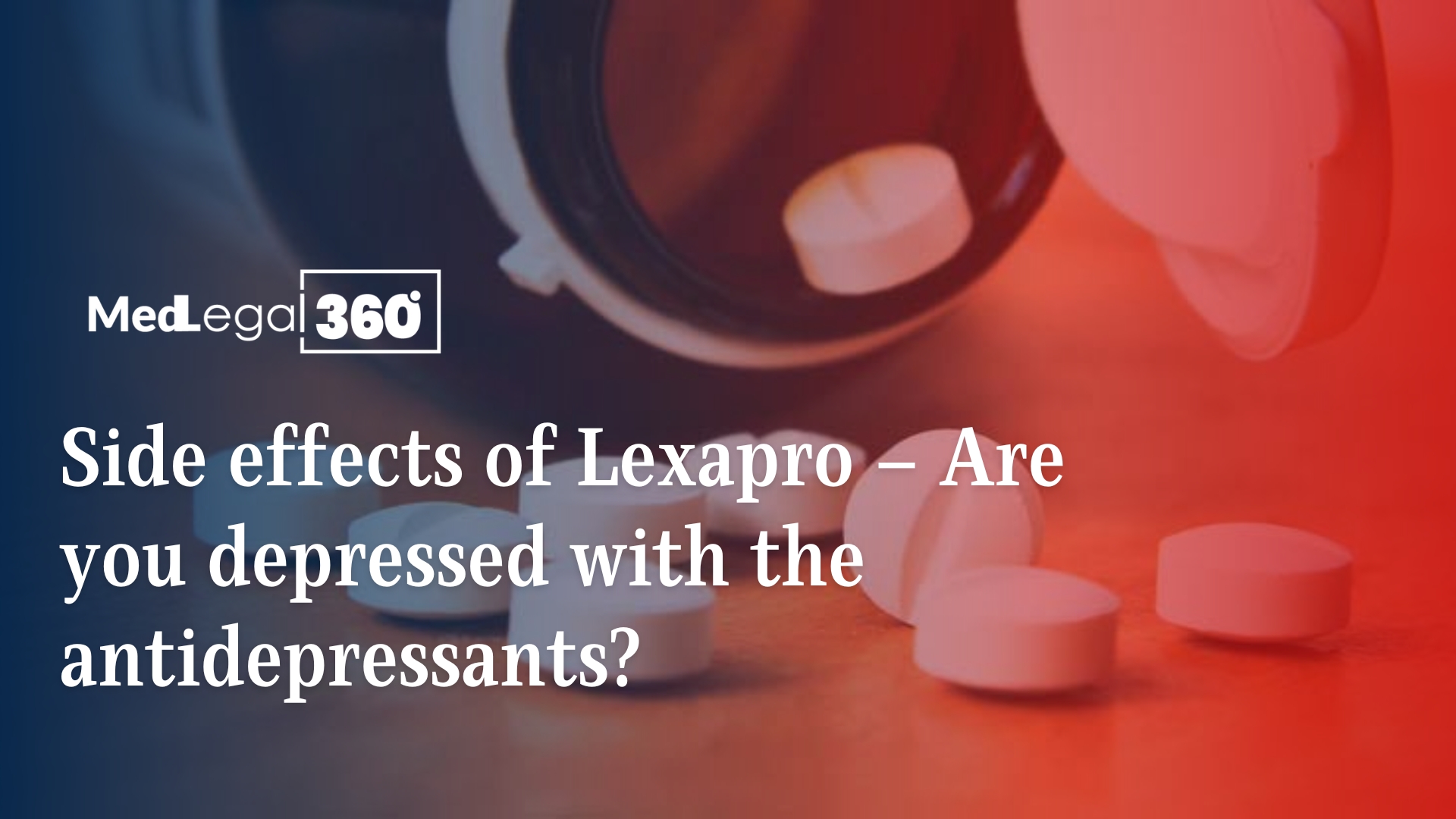 The advancements in medicines and treatments to safeguard people from the past to the 21st century is just unimaginable.

The findings of various diseases result in the discovery of different new medications.

Though these medications help people to overcome their pain and suffering, a lot of them carry some lethal side effects too. One such medication is Lexapro.

Before learning about Lexapro, you should be familiar with the most often prescribed antidepressants, selective serotonin reuptake inhibitors (SSRIs).

SSRIs are the front-line treatment solution for depression. Lexapro is one of the antidepressants from the group of drugs in SSRIs.

It is the brand name of Escitalopram. Some of the other SSRIs are Celexa, Prozac, Luvox, Paxil, Zoloft, etc…

In 2002, Lexapro was approved by the American Food and Drug Administration (FDA).

In 2003, after the article published by “Time” against Lexapro that it may cause birth defects and lead teenagers to suicidal thoughts, a lot of lawsuits were filed against Forest Laboratories.

In 2009, the United States Justice Department filed charges against Forest Laboratories, claiming that they hid the study’s report that the medication was unsuitable for adults.

In 2020, with more than 30 million prescriptions, Lexapro became the 15 most commonly prescribed medication in the United States.

Lexapro is used to treat anxiety and depressive disorder in adults over the age of 12. Lexapro balances the level of serotonin in the brain and nerves.

When serotonin levels decrease, people may suffer from anxiety and depression. Serotonin is the hormone that plays a significant role in body functions such as mood, sleep, nausea, sexual desire, etc.

What are the side effects of Lexapro?

Like many other medications, Lexapro also carries deadly side effects, not for everyone who consumes it, but for many people.

Some of the common negative side effects of Lexapro are as follows.

If these side effects of Lexapro last long or get worse, consult your doctor immediately. Most of the people who are using Lexapro do not suffer from severe side effects.

However, while taking the medication with other medications, which also increases the level of serotonin, the risk of serotonin syndrome may cause.

Therefore, make your doctor know what medications you are consuming before taking Lexapro.

Though the side effects of Lexapro are severe, these effects are not considered deadly.

But the deadliest side effects that led Forest Laboratories Inc. to face a lot of lawsuits are Lexapro’s birth defect and the thought that leads adults to suicide after consuming it.

The possibility of birth defects is high when the mother consumes Lexapro during pregnancy.

Lexapro has been identified as a category C pregnancy drug by the U.S. Food and Drug Administration because the drug has been shown to cause birth defects in animals.

Though the medication causes some side effects, sometimes its benefits outweigh the risks in many situations.

Birth defects caused by Lexapro include:

The infant’s mother should need to be aware that Lexapro can travel through the placenta and put themselves and their infant at risk. Some of the possible birth defects are as follows.

Sometimes it may lead to speech impairment. A cleft lip can be corrected by surgery.

Infants in the womb are twice at the risk of anencephaly when exposed to Lexapro.

Not only Lexapro, but all SSRI drugs also imposes a heightened risk of heart defects in newborns.

Infants’ mothers should consider their health as well as that of their child and understand the potential risks and benefits of Lexapro from their doctor.

Anyone with a child or young adult taking Lexapro is urged to look for signs of suicidal thoughts. These include sudden mood swings, unusual behavior changes, taking risks, and engaging in impulsive activities.

Immediate medical attention should be sought for anyone whose depression worsens, who talks about suicide, who experiences a sudden burst of energy, or irritability, or who just starts acting in ways that are unusual or troubling.

The FDA added these additional warnings to Lexapro labeling in 2007. As the medication had already been on the market for five years, many children and teens suffered from the side effects before the inclusion of the black box warning.

Doctors may prescribe Lexapro to children and young adults, but they are supposed to do so with caution when other treatments are not possible.

Side effects of stopping Lexapro

You might feel compelled to quit taking an antidepressant or lower your dose if the side effects of Lexapro become severe.

Please don’t do it. Your symptoms might come back, and abruptly discontinuing your antidepressant could result in many other side effects like rashes.

To determine the best solutions for your problem, consult your doctor.

I was suicidal after my alcohol withdrawal. I was on Prozac and seroquel. I was allergic to Lexapro but stayed on it (had a small rash on my chest). It got rid of the reciprocal thoughts, Im off it now and it hasn’t been as bad, rash is gone too

In May 2022, Erika Jayne, The Real Housewives of Beverly Hills star mixed her anti-depressant Lexapro with alcohol. She shares her experience of the incident in an interview with U.S. news.

In October 2022, Princeton student Misrach Ewunetie died by suicide. The Mercer County Prosecutor’s Office reveals that the 20-year-old took her life by ingesting a deadly dose of bupropion, escitalopram, and hydroxyzine.

How to avoid the side effects of Lexapro?

Doctors always prescribe Lexapro only when the benefits of the medication are higher than the risk associated with that.

However, it is better for us to minimize any effects of the drugs we consume. The following are some of the precautions you can follow to avoid some negative side effects of Lexapro.

Following these precautions doesn’t mean that you are free from suffering fatal effects but, it may lessen the possibility of side effects.

Claims against Forest Laboratories allege that the manufacturer failed to warn the general public about the side effects of Lexapro.

Researchers found that the company was aware of the chances of birth defects associated with their dangerous drug Lexapro, but chose to keep this information away from the public.

Lawsuits filed against Forest for birth defects caused by Lexapro have stated that the women may not have taken the drug if they had been appropriately informed of the risks.

Though Forest has faced numerous lawsuits for defects caused by Lexapro, most of these lawsuits have settled, been dismissed, or otherwise resolved.

What can I do if I suffered from the side effects of Lexapro?

People or family members of those who suffered after taking Lexapro should seek legal advice and file a lawsuit.

Not only claiming a case is enough; you should prove that your sufferings are due to the medication you consumed.

How to prove the side effects of Lexapro in the trial?

Medical records are one of the best pieces of evidence you can have. Your medical record contains the complete detail of your medical history including, medical test results, lab reports, medical bills, discharge summary, and so on.

How can I make an error-free medical record for legal proceedings?

Your medical records not only carry evidence for your Lexapro lawsuit but also a lot of information that is entirely unnecessary for your lawsuit against the side effects of Lexapro.

Therefore, it is difficult for the attorney who is handling your case to go through the complete medical record.

How medical record review helps you to succeed in your Lexapro lawsuit?

Medical record review is nothing but reviewing your medical records and highlighting the essential points required for your lawsuit.

Through this process of medical record review, attorneys save their time and utilize it to concentrate more on other parts of your Lexapro lawsuit. This aids the attorneys to succeed in your case.

But, in most cases, it is difficult for the attorneys to review medical records because they find it difficult to understand many medical terms and terminologies.

How does a medical record review company assist attorneys in a Lexapro lawsuit?

Companies specializing in medical record reviews will have a staff of knowledgeable reviewers. As they are well-versed in medical terms and terminologies, they can review any sort of medical records.

The quality they provide, the time they take, the data they safeguard, and the price they demand medical record review are all highly advantageous to the lawyers.

Therefore, to make sure the success of your litigation, it is thus highly beneficial for the attorneys to work with the top medical record review company.

For a brief outline of this blog, kindly go through the following pin…