Did scars and disfigurements derail your life? Don’t hesitate to sue 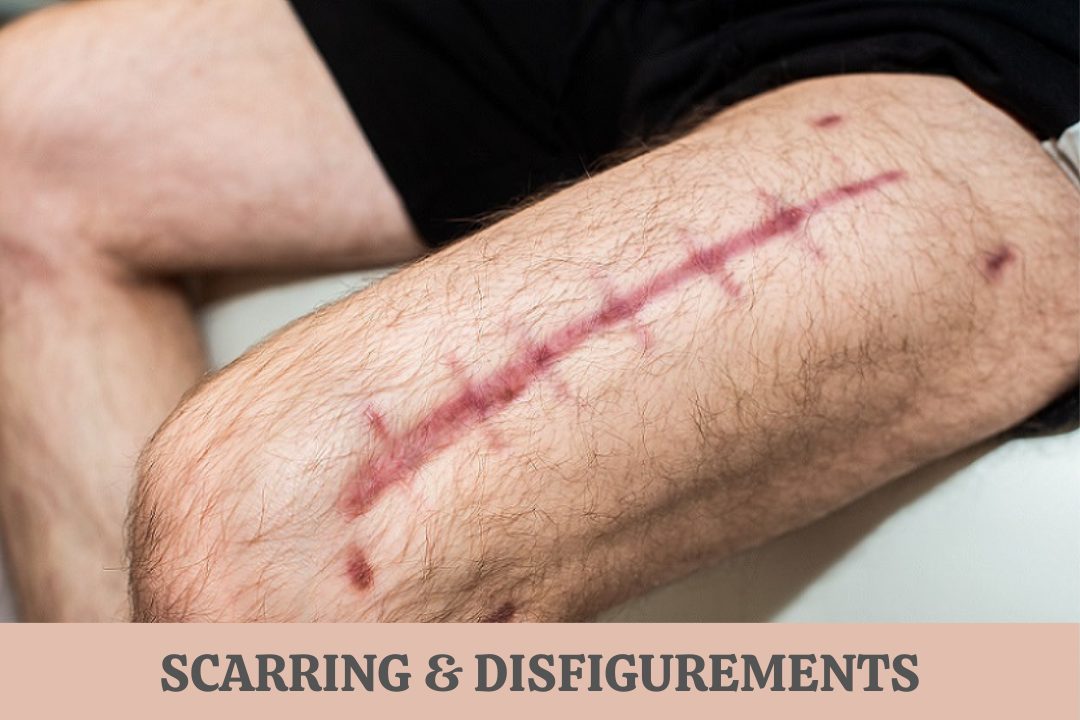 The increasing number of beauty clinics and the spike in beauty products and reconstruction surgery centers indicate how much people value their appearances. When some life-threatening injuries result in scarring and disfigurements, people will feel embarrassed and disheartened.

When people encounter catastrophic accidents, detrimental injuries become ineludible. Grave injuries from such accidents might heal after some time. However, the scars and disfigurement they cause would be painful not only physically but emotionally as well.

The scarred or disfigured people have to undergo many emotionally unbearable scenarios in various walks of life. Scarring of tissues in the face and visible places would make a person feel the loss of self-esteem. Career opportunities, getting a life partner, or socializing with people becomes challenging. Emotional distress from such moments can lead to PTSD and other physical and psychological illnesses.

Did your traumatic injuries disfigure you? Don’t be disheartened. There are reconstruction surgeries to rectify your scar and disfigurements to an extent. Now you may be worried about how you will pay the enormous fee for the correction surgeries. You can sue against the person who was negligent in causing injuries to you. The restitution will cover your existing medical bills and future plastic surgeries.

This blog delves into the fundamental details of scarring and disfigurements and the prospects of proceeding with the lawsuit.

What are scars and disfigurements?

Scarring occurs as a result of the growth of fresh skin over the abrasions or lacerations. Minor scars will fade away when time passes. However, severe injuries stay permanently to remind the people of the incidents and ignite their worry over their appearance.

When a person’s body is wounded or scarred to the extent that it mutilates or disfigures the appearance permanently, it’s known as disfigurement. This is somewhat irreparable unless with the help of plastic surgeries.

Certain cosmetic procedures also could do damages to your body. Often people do cosmetic surgeries to look better. However, sometimes such surgeries also could harm people. One of the famous Canadian supermodels, Linda Evangelista, had told her story of a failed cosmetic procedure after many years. She had once undergone fat reduction surgery. However, the surgery was a failure and made her live her life out of the limelight. She has filed a $50 million lawsuit against the cosmetic surgeon for disfiguring her.

Prominent causes of scarring and disfigurements

Catastrophic injuries become the primary culprit in disfiguring or scarring the human body. Disastrous motor vehicle accidents, explosions, burns, or even surgeries can add their part to the data. Let’s analyze the causes in detail.

The image of a fierce dog with sharp canines can correlate with how scary the wound will be. Since the teeth are so sharp, the bite will pierce many layers of the skin. The deeper the damage, the riskier the scar would be. Children are more vulnerable to such fatal wounds since they are smaller and prone to injuries in the face or neck.

Injuries in visible places will leave persisting scars or disfigurements to affect them psychologically for their life long. Even minor dog bite injuries can leave scars behind if left unattended and infected.

Auto accidents like disastrous truck accidents, multi-vehicle collisions, rollover accidents are some of the gruesome incidents that could cause road rashes, lacerations, cuts, fractures, or amputations. These intense injuries could damage a wide area of the skin. Deeper wounds will need sutures too. Even after healing, sutures leave scars behind.

Injuries to the face will result in unrelenting disfiguring scars for the rest of your life. Since the face has soft tissues compared to the other human body parts, even milder injuries will leave long-standing scars. The healing process would also take longer as the face is exposed to natural elements, unlike other covered body parts.

Burn injuries could occur due to chemical explosions, exposure to extreme steam, electric accidents, and fire. When the skin tissue is burnt severely in multiple levels destroying the dermis, epidermis and going deep into subcutaneous fat tissues, the severity of the injury becomes detrimental and irremediable.

Losing the limbs in accidents is an agonizing moment in an individual’s life, physically and emotionally. Disfigurements due to amputations will be permanent. External trauma may recede slowly, but the psychological storm would drain the victim’s hope about his future.

Scarring tattoos also have their part in disfiguring people. When tattoo parlors do something wrong in their procedures, that will end up in scarring the tissues. The carelessness on the part of the people following the after-care can result in scarring from tattoos.

Cosmetic surgeries are meant to enhance the beauty and appearance of an individual. When these surgeries go wrong, the individual will end up facing disfigurements. The co-host of “The Talk” show had openly admitted that she had felt her face look like plastic at certain angles. She regretted doing correction surgeries on her face.

Types of scars that cause disfigurements

As we have seen above, catastrophic injuries tend to leave behind irreparable scars. These scars are different in their appearance and effects. Some would not fade away and stay forever.

Keloid scars are different from normal scars. They are lumpy and raised from the average skin level. Once the abrasions or wounds heal, the skin will grow and cover the wound. In some people, these scars outgrow the injuries to surrounding areas too. Prolonged growth of the scar with extra collagen also can be noticed in people with keloid-prone skin. They are painful too. Treating these scars with scar revision surgeries may not work in some people, as keloids have chances to regrow.

Atrophic scars are just opposite to the keloids. These scars form below the normal skin level when the skin cannot restore tissues to repair the wounds. Reduction in collagen levels makes the newly formed skin sunken from the normal level.

Hypertrophic scars are similar to keloids, as they are also thick and rise above the skin level. When the wounds heal, there would be abnormal growth of the skin in the wounded region. However, these scars would not go beyond the outline of the injured skin, unlike the keloid scars.

Contracted scars appear as a result of burn injuries. When the burn injuries heal, the skin will contract to the extent that it tightens and prevents even the movement of the body part. When this occurs in joints, it will create complications in moving the joints. This might need revision surgery.

How to rectify scars and disfigurements

Living with the scars and disfigurements is emotionally challenging. Are you worried about how you are going to cope with that? There are innovative methods to relieve the affected people, like you, from the emotional anguish draining confidence.

Treatments like dermabrasion, laser therapy, chemical peels, or skin bleach therapy are used to lighten the milder scars. Incisions are used to remove the deeper scars.

Scar revision surgeries like plastic surgery, skin grafting, tissue expansion, and flap surgery are used to reform the scarred skin that is visible or with restricted movement. To bring back the mobility of the limbs and improve the function of the skin affected in burn injuries, surgery has to be done to release the limbs and joints.

In skin grafting, healthy skin from another part of the body is used to repair the affected region. Surgeons would reposition the scars to close blending with the natural lines to make it look normal.

For intended scars, tissue expanders like small water balloons are placed below the skin to stretch it. In the expanded part, new tissues will grow and refill the recessed scars. In flap surgeries, skin with the blood vessels and fat tissues from the donor site is removed and grafted into the affected skin.

Mutilated and amputated body parts can be modified using prosthetics to improve the quality of life to an extent.  In some cases, even face transplants are done to people with facial injuries. Around 6 famous clinics have performed such complicated reconstruction surgeries and sowed the seeds of hope in the minds of the people. Cleveland clinic was the first facility to undertake a face transplant in the U.S.

Can you sue for scarring and disfigurement?

Definitely, you can sue for your disfigurements caused by someone else’s negligence. Suppose your appearance is marred by disastrous accidents, negligence of the medical practitioners, or carelessness of premises owners. In that case, you can file a disfigurement lawsuit against the person who had caused your injuries.

In auto accidents, the defendants are liable for the plaintiff’s life-altering disfigurements. Scarring and disfigurement can add more value to your injury claims and increase the recompense for the damages.

Before doing surgeries, if the medical provider fails to warn the patient of the possibility of a perennial scar, the victim could sue the surgeon. Even when the plastic surgeries do not bring the desired effects and result in disfiguring the victim, he or she could sue the surgeons. Even if signing informed consent forms becomes a barrier, the chance of getting the desired reimbursement does not diminish.

If the tattoo artist fails to enquire about your allergies before proceeding with the work and it causes permanent scars, he can be sued for his negligence. However, signing a liability waiver before the tattooing can impact your claim. Any weaknesses in the waiver could assure compensation.

Fatal injuries need prolonged treatment. Persistent wounds will ensue in durable scars. For treating permanent and disfiguring scars, you have to undergo extensive surgeries and expensive treatments. To get reimbursement for your treatment cost, you can claim for the damages you have sustained.

Let’s see the damages you can claim for your scarring:

What strengthens your claim?

Documenting your injuries is inevitable in winning your restitution. While getting treatment, enquire the physician about the possibility of a residual scar or disfigurement. Request him to document that. Since medical records are inevitable pieces of evidence, reference to scars and disfigurements appends validity to your claim suit.

Based on the area of the scar, depth of the injury, change in the quality of life, the judge will decide on the compensation. If the scar is on the face, arms, legs, or the visible parts of the body, it adds to the restitution value rather than in the covered body.

Getting disfigured in a catastrophic accident is the most traumatizing part of the life of an individual. Blemishes in the visible parts of the body will make an individual embarrassed to socialize with others. However, one need not worry about living his life with emotional anguish. Reconstruction surgeries are handy in restoring the person to his former self to an extent.

If your scar and disfigurements are the results of somebody’s negligence, you have the hope of pursuing a lawsuit. Veracious medical documentation will strengthen your claim. Reimbursing a lucrative sum from your claim will give you a chance to do the revision surgeries.

‘Scars and disfigurements do not make you look scary or evil or bad.’

We know that #Halloween can be a difficult time for our community, so we want you know that we’re here if you need our support: https://t.co/nji0r5kjXG