Train derailments and liability-How to sue? 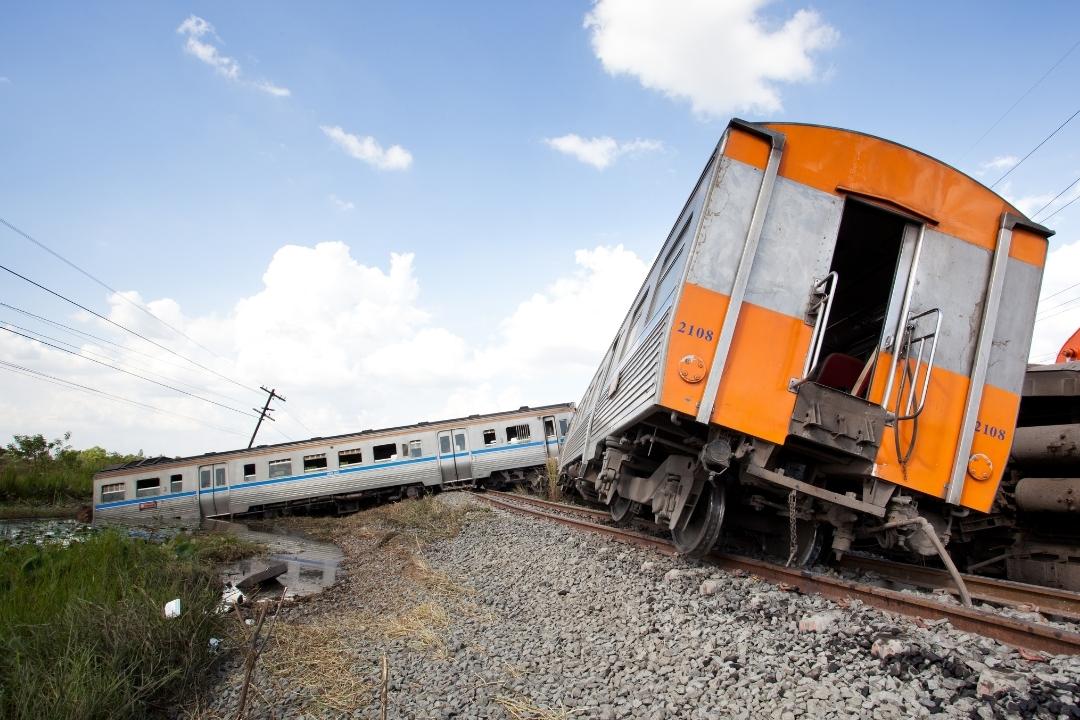 In the middle of February 2022, a BNSF train derailed in Frazee, Minnesota, causing another train stationed nearby to go off the track. Because the derailed cars carried lithium batteries and petroleum, nearby residents were evacuated as a precautionary measure. If the lithium batteries caught fire, they would emit toxic gases and create an inextinguishable fire. As a result of this Frazee train derailment, preventive measures were implemented even though no hazardous materials were spilled.

“My train of thought derailed. There were no survivors”. The quote can be related to our topic of discussion, train derailments. Imagine a mammoth train speeding with passengers. If that train derails, the aftermath will be disastrous as the number of passengers on the train and the train’s velocity are more. Train derailments can cause devastating effects on the lives of passengers and their families.

Train accidents, collisions, and derailments can all result in fatalities. A train derailment occurs when the train’s wheels go off the track due to various factors. As you may be aware, America has approximately 600 railroads, thousands of miles of railway track, and approximately 209,000 railroad crossings.

The National Railroad Passenger Corporation, or Amtrak, formed by the federal government in 1971, operates in 46 states on 21,000 miles of rail tracks. Many other private companies that run freight trains also run passenger trains. However, trains are currently used only by a smaller percentage of the population for commuting. Currently, railroads are primarily used for freight transportation.

As per the Association of American Railroads, the United States of America uses 140,000 miles of railroads owned by the private for transporting freight. Passenger trains in the North East Corridor use electric power for efficiency and speed.

See what a recent train derailment in August 2022 in Ohio looks like.

Right now multiple authorities and emergency crews are responding a large train car derailment with 19 train cars derailed after A vehicle struck the train casing the accident injuries are unknown at this time pic.twitter.com/1ApgpTIEpI

Do you know? How many trains derail a year? According to the Federal Railroad Administration’s Office of Safety Analysis, around 1000 train derailments occur in the U.S. As per their latest data, in 2021, 965 derailments were caused by various factors. The only relief is that there was a 13.2% decrease from the previous year. As per the data in the past decade, Amtrak encountered 24 derailments every year. However, it was less when compared to the 43 annual train derailments in the decade prior to that. It is found that every 90 minutes, a train derails or crashes against some object. 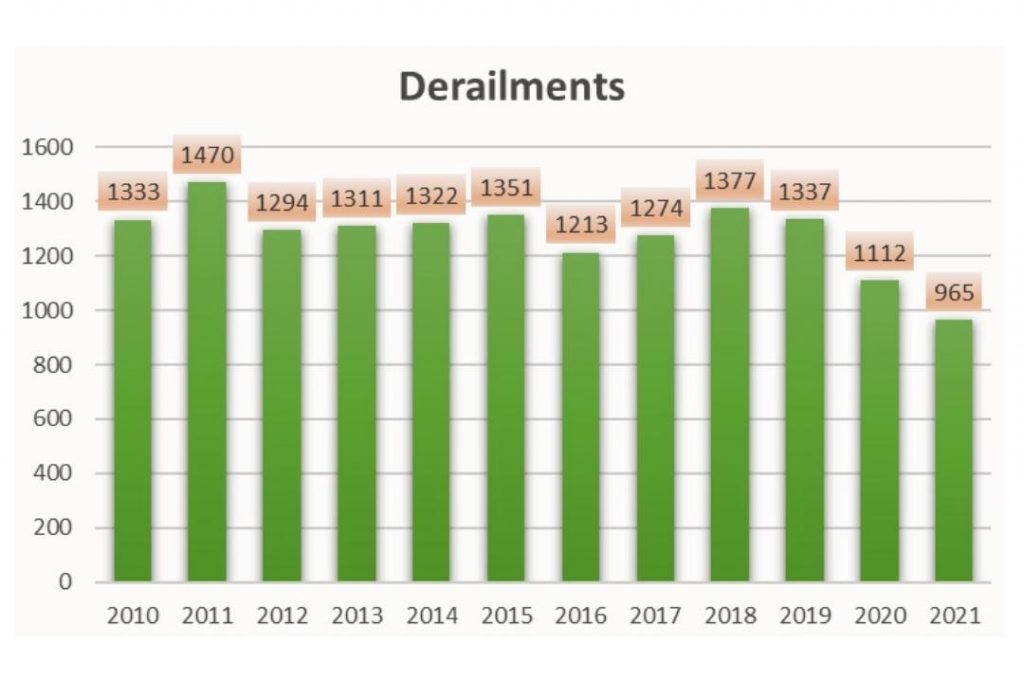 The prominent cause of train crashes is derailments. From 2001 to 2010, around 58,299 train accidents were recorded in the U.S., out of which 54,889 were derailments. The most concerning data is that every two weeks, a freight train transporting hazardous cargo derails in America, and many of them spoil the environment.

Louisiana found the worst derailment in its history, when a freight train derailed in 2008, the 10,000 gallons of hydrochloric acid spilled made many thousands of the nearby residents quit their homes. A yellowish pool of acid was found at the site of the derailment. The BNSF used lime to neutralize the acid. Many confronted eye and skin irritation as the toxic cloud permeated the area.

Know Why and How Trains Derail

This video will tell more about why train derailments occur.

Worst Derailments in the U.S

The United States has experienced some of the most heinous train derailments in history. Let’s take a look at a few of them to get a sense of how serious the train wreck could be.

The train is the most secure mode of transportation. Ordinary obstructions will not simply derail a train. However, when it happens, it can lead to disastrous consequences. If the train’s technical faults create an accident, the train owner may be held accountable because it is their job to inspect the train before transporting people or cargo.

If a derailment was caused by an unwelcome object on the track, the owner of the object will be held liable for the mishap. If a damaged rail track contributed to the accident, the railroad owner or the body responsible for track maintenance would be held accountable. If a public entity or government owned the track, it would be liable for any damages.

In most cases, the defendants would be the train conductor or operator, property owners, train car or engine manufacturers, the Railroad Corporation, and crews responsible for railway maintenance.

Based on the nature of the accident and the people injured, train derailment lawsuits can be classified as personal injury, product liability, class-action, multi-district litigation, or wrongful death lawsuits. The lawsuits will be filed in accordance with federal and state laws. The Federal Railroad Safety Act (FRSA) of 1970 empowers the Federal Railroad Administration (FRA) to regulate the railroad industry in order to the FRA regulates the railway industry through the Signal Inspection Act, Accident Reports Act, Railroad Safety Appliance Act (RSAA), and Locomotive Inspection Act.

The Signal Inspection Act ensures that signal and train inspectors are qualified. They are obligated to ensure that all of the signals are operational and in good working order. The Accident Reports Act protects the safety of injured railway workers. The RSAA ensures railroad employees’ safety and maintenance standards. Even if the laws of the state in which they reside differ from those of the federal safety laws, the RSAA applies to all states in the United States. They ensure the use of safety equipment such as side-car handholds and grab irons, efficient hand brakes, power-driving wheel brakes, drawbars, and train couplers that can couple by impact.

Under the Interstate Commerce Act (ICA), the United States Congress regulates entities that transport people or cargo. Though the states have their own laws to regulate the railroad industry, they are superintended by federal laws. The National Transportation Safety Board (NTSB) also investigates and determines the cause of train accidents, such as derailments.

The Federal Employers Liability Act [FELA] was enacted to protect the legal rights of railroad employees who are injured on the job. Congress passed the act in 1908 in response to an increase in railroad deaths. Though other employees can seek compensation through worker’s compensation, railroad workers are protected by FELA. The only distinction is that they must demonstrate that the railroad industry was negligent in causing their injuries. If proven, they can receive full compensation for their injuries, which would be far greater than worker’s compensation benefits. Under FELA, CSX, the leading rail freight transportation provider, was required to pay around $35 million to settle over 450 lawsuits alleging solvent exposure had caused brain damage.

Federal laws regulate licensing, equipment, and transportation-related processes, as well as violations of regulations, to ensure safety and determine liability in the event of an accident. The Railroad passenger transportation liability cap was raised to $322,864,228 in 2021. Earlier, all the commuter rail agencies are supposed to have liability insurance coverages of $294,278,983.

Let’s take a look at a couple of railway derailment settlements. The plaintiff and his family were waiting to cross at a Rockford railroad crossing when a CNRC train hauling ethanol derailed. The washout of a section of rail line near the crossing was conveyed to the involved parties about 20 minutes before the disaster, and the engineer also observed the track problems on time. However, he failed to slow the train down, leading it to derail.

The collision resulted in a large explosion and a fire that extended to the plaintiff’s automobile. The plaintiff suffered burn injuries, and his wife died on the scene. Three railroad corporations were destined to reimburse the plaintiff for around $23 million, and his daughter received $13.75 million for her injuries.

After 2.5 years of the derailment, the multi-district action involving the Philadelphia Amtrak train disaster and eight wrongful death claims was resolved for around $265 million. In these cases, the maximum sum was awarded as a damages cap in less time, and it was the biggest settlement ever in the train derailment lawsuit settlements. The wife of a deceased software developer was granted $57 million in a wrongful death claim following the 2017 Montana Amtrak train crash.

On behalf of the old couple Donald and Marjorie Varnadoe, who lost their lives in the Montana train derailment in 2021, their bereaved family has proceeded with a federal lawsuit against Amtrak and BNSF for wrongful death and negligence in February 2022. Let’s wait and see if the outcome of the lawsuit will bring solace to the grieving family.

If you are hurt in a train derailment, you have the right to sue the people who caused your injuries. The important factors considered were whether the train operator made an error while driving, whether a defective product caused the accident, or whether negligence in routine maintenance work caused the accident. Depending on the circumstances of the accident, liability for the derailment may fall on the railroad company’s owners, entities responsible for train or railroad maintenance, or manufacturers of train parts.

As a victim, you have the right to seek compensation for things like medical bills, lost wages, pain and suffering, emotional distress, and scarring or disfigurement. If you have lost a loved one in a derailment, you may be entitled to wrongful death benefits such as funeral or burial expenses, loss of consortium, loss of financial support to dependents, and loss of inheritance. Seek the assistance of a train derailment lawyer to expedite your litigation and maximize your claim.