Uloric lawsuit- Will the litigation escalate? 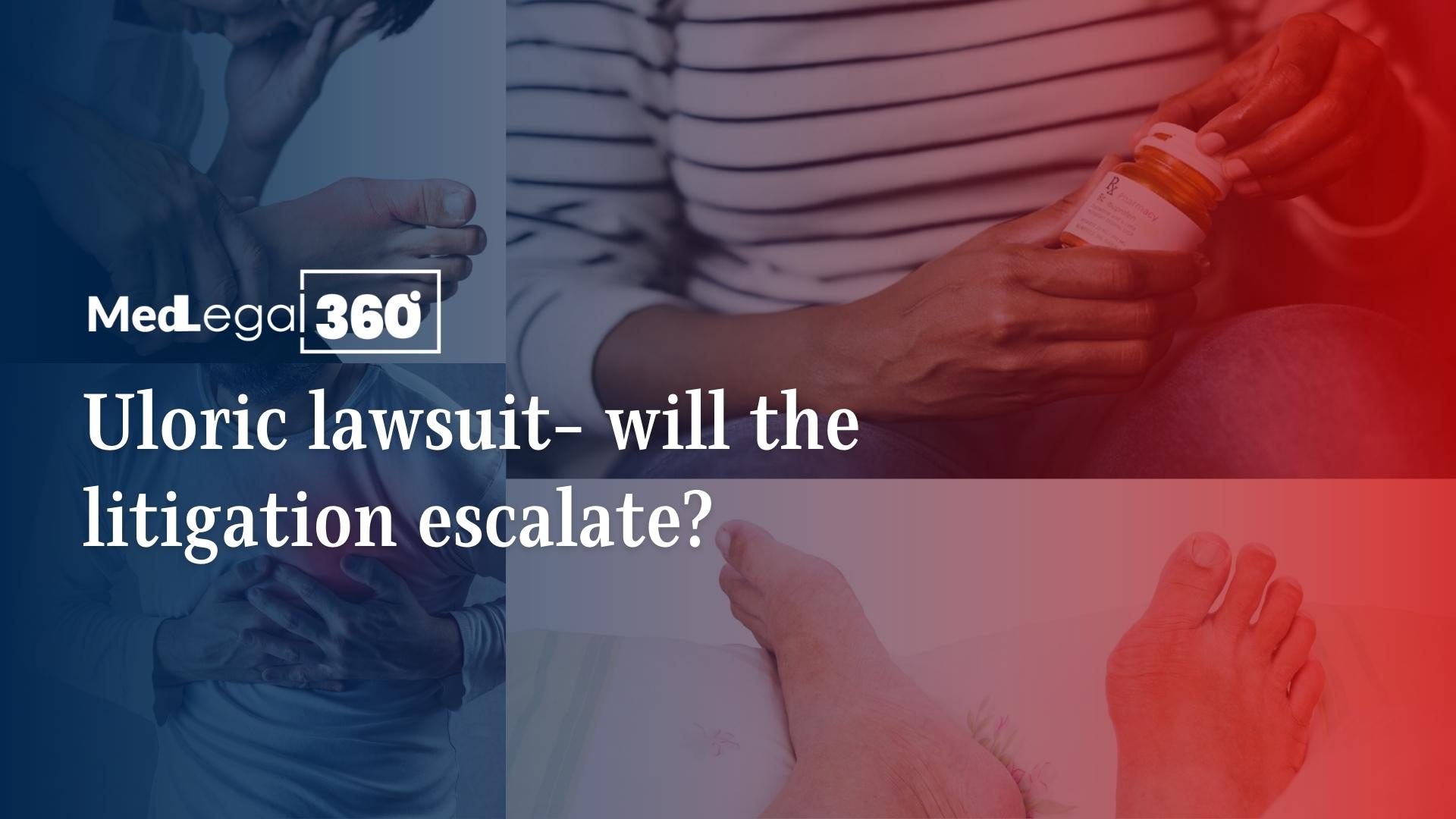 The possibility of uloric lawsuits turning into a class-action is significant since the drug manufacturer neglected to inform the public about the dangers associated with uloric.

This blog will provide you with a thorough understanding of uloric, how it leads to lawsuits, and how to file a uloric Lawsuit if you are experiencing uloric side effects.

Uloric is an oral tablet used to treat hyperuricemia (constantly high uric acid levels). It is used in the long-term treatment of gout.

Gout is painful and potentially causes a severe type of arthritis that has existed since the beginning of humankind. Gout symptoms include pain, swelling, redness, heat, soreness, and stiffness in certain joints. 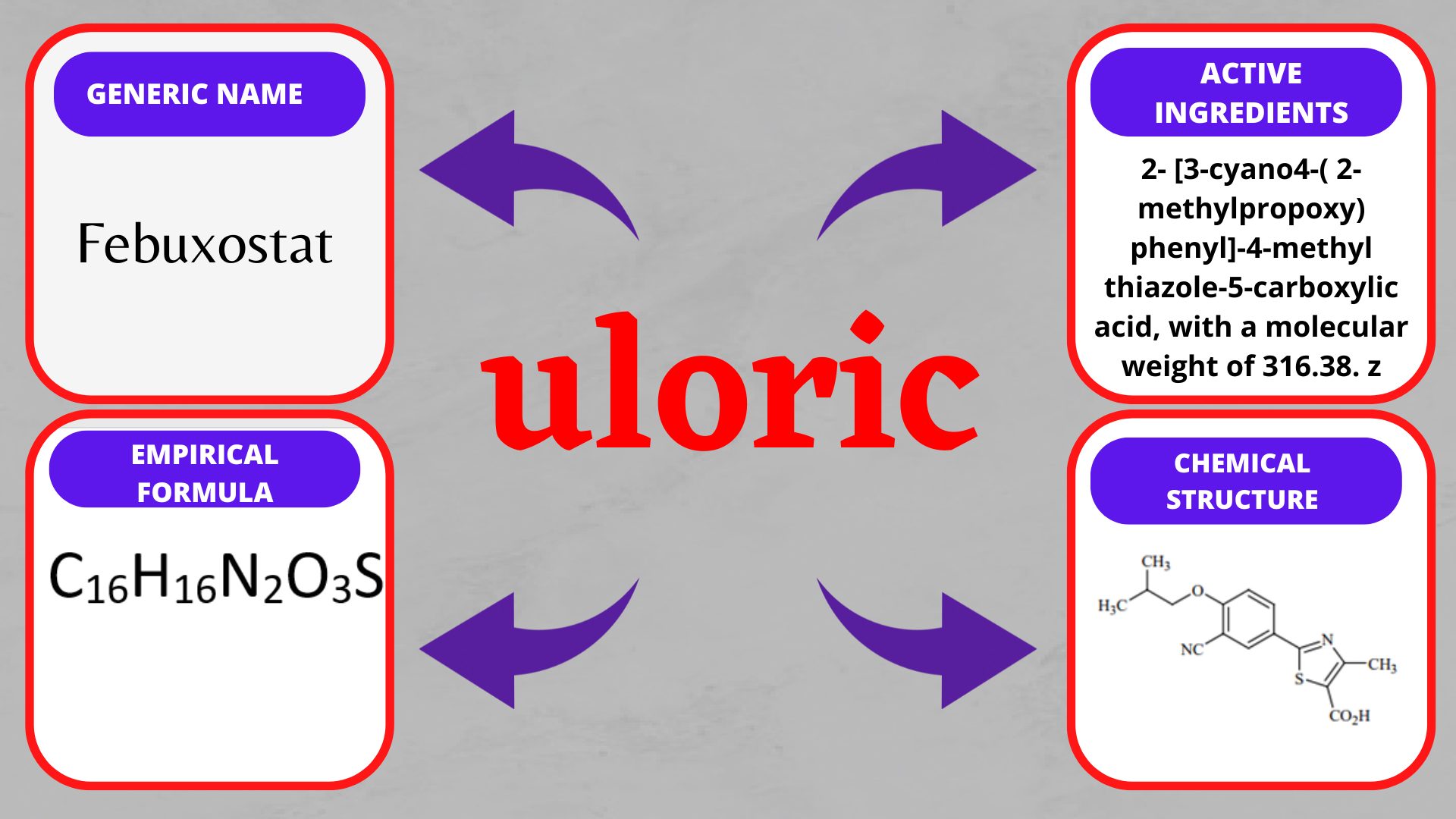 In 1998, scientists at the Japanese pharmaceutical firm Teijin developed uloric. Takeda Pharmaceuticals manufactures and markets uloric in the United States.

Uloric was licensed by the FDA and introduced to the market in the United States in February 2009. Before clearance, the FDA denied uloric’s application twice, in 2005 and 2006, claiming a lack of cardiovascular information.

Takeda Pharmaceutical Company reported $1.9 billion in medicine sales between 2012 and 2017.

How does uloric function?

Febuxostat oral pill rarely causes drowsiness. However, it can have unintended side effects.

Some of the more common febuxostat side effects are:

If the side effects are minor, they may fade away in a few days or weeks.

Some of the serious side effects of uloric are Liver injury, Heart attack and stroke. Their symptoms are as follow:

Liver injury symptoms can include:

Heart attack symptoms can include:

Stroke symptoms can include:

The FDA’s strictest and most conspicuous warning, the “black box warning,” was issued in February 2019 for Takeda’s well-known gout medication, uloric.

Compared to the gout drug allopurinol, uloric (febuxostat) is linked to an “increased risk of heart-related mortality and death from all causes.”

The boxed warning further states that uloric should only be used for individuals who have not benefited from other gout treatments or have experienced Allopurinol’s adverse side effects.

Takeda initiated the CARES clinical research following the FDA’s guidelines after uloric became available to patients in the U.S.

In March 2018, the trial’s findings were published in the New England Journal of Medicine. The research revealed a higher risk of mortality with gout medication.

The study examined 6,190 gout patients who were administered Allopurinol or febuxostat, the active component of uloric. Patients were monitored by the researchers for an average of 32 months.

A total of 26 fatalities per 1,000 uloric patients and 22 deaths per 1,000 allopurinol patients were found when researchers included all possible causes of death.

The researchers reported that the febuxostat group had a higher rate of cardiovascular mortality and deaths from any cause than the allopurinol group.

Is uloric still on the market?

The FDA recently decided that Takeda Pharmaceuticals’ uloric (febuxostat) should no longer be recommended as a first-line treatment for gout. They restricted the use of uloric to only those patients who did not respond well to or could not tolerate Allopurinol.

In Dr. Ge’s whistleblower case, the firm is accused of knowing about serious adverse effects of uloric, such as renal failure, congestive heart failure, and liver failure, from pre-approval data but failing to adequately warn customers by changing the drug’s label.

Because of this, individuals and the government (via healthcare programs like Medicaid) spent much more for uloric prescriptions when they could have somewhat purchased the much more affordable generic medicine allopurinol, according to the lawsuit.

In the end, Takeda successfully rejected Dr. Ge’s whistleblower claims by the U.S. District Court for the District of Massachusetts. Dr. Ge filed an appeal, but the federal judge upheld the dismissal on technical grounds, and the Supreme Court eventually declined to consider the matter.

Following the release of 2018 CARES clinical study, the nonprofit advocacy organization Public Citizen requested that the FDA recall uloric from the market.

In its petition, Public Citizen stated that there is “overwhelming evidence” that febuxostat’s cardiovascular side effects outweigh any stated clinical benefits.

The petition claimed that Takeda aggressively advertised the medicine to “thousands and thousands of patients over the previous decade who were unaware of the possible hazards.”

The same day it revealed the new cardiovascular mortality risk warning on the uloric’s label, the FDA rejected the petition. The FDA stated in its answer to Public Citizen that it found there were still people who potentially benefit from the medication.

Dr. Janet Woodcock, the head of the FDA’s Center for Drug Evaluation and Research, stated in a letter in response to Public Citizen that “there are patients for whom the benefits of febuxostat outweigh the risks due to the limited treatment options available for gout and the risks associated with them.”

Most claims in uloric lawsuits against Takeda Pharmaceuticals revolve around the increased mortality risk associated with gout medication.

Patients who allege they developed other cardiovascular issues after using uloric, such as stroke, pulmonary embolism (P.E.), and deep-vein thrombosis (DVT), are also filing cases.

The allegations in uloric cases revolve around the drugmaker’s duty to warn patients about potential adverse effects induced by its products.

Despite indicating the possibility of a higher risk of cardiovascular events in early clinical studies, plaintiffs claim that Takeda failed to warn patients about such risks adequately.

In October 2019, Peter G. Karidis filed a uloric Lawsuit alleging that the uloric caused his heart attack. According to the case, Mr. Karidis’ physicians would not have prescribed the medicine if they had been told of its actual risks.

The lawsuit accuses Takeda, the medicine manufacturer, of being responsible for Mr. Karidis’ heart attack. The court has not yet scheduled trial date in this case.

James Wagers, a Kentucky resident, filed his complaint in the United States District Court for the Northern District of Illinois on August 26, 2020.

Wagers claims Takeda Pharmaceuticals, the manufacturer of uloric, as a defendant in the claims, stating that the business failed to notify the public about uloric’s heart health risks appropriately.

Wagers claims that in 2016, he was initially prescribed uloric to treat his gout. He then had a heart attack in February 2017, requiring immediate medical attention and leaving him with chronic health difficulties.

Wagers claims that Takeda Pharmaceuticals did not inform patients and doctors about the hazards of uloric, denying them the option of using a potentially safer medicine for gout therapy.

In January 2019, Gisele P. claimed Takeda Pharmaceutical Company in a Takeda uloric lawsuit. According to Gisele, she received a prescription for uloric from Takeda in 2010 to treat her gout and excessive blood uric acid levels.

She reports that she started to notice adverse effects after taking the drug for several years. When Gisele was taken to the hospital on or around June 17, 2013, a thoracic aortic aneurysm, or weak area in her aorta, was found.

Gisele is sure that her gout medicine brought on her aortic damage because uloric has been associated with heart issues. Gisele alleges that after stopping her usage of Uloric, the drug’s adverse effects are still causing her to have crippling ailments.

According to Gisele, Takeda was aware that the medicine might result in deadly or seriously life-threatening side effects in some individuals. Gisele also asserts that no warnings about potential medication interactions were included in the box information or label when she was prescribed uloric.

Timothy Dixon was given the medication uloric, a severe form of arthritis brought on by excessive uric acid levels, in 2011, according to a complaint filed to the U.S. District Court, Northern District of Illinois, on April 15, 2020. He stopped using uloric in April 2019 after having a heart attack.

Dixon claims that Takeda Pharmaceuticals knew the medicine might cause cardiac issues and other adverse events for a long time but purposefully omitted such concerns from the product’s warning label. Dixon joins other uloric lawsuit plaintiffs in making this assertion.

In America, is there a Class Action Lawsuit for uloric?

These cases are not combined into a uloric class action lawsuit. Instead, they are individual lawsuits. In the future, uloric cases could be consolidated into a federal Multi-District Litigation (MDL).

What can you do if uloric has hurt you?

If uloric has caused you pain, or if a loved one died due to cardiac disease while using uloric, you can file a product liability claims against Takeda Pharmaceutical Company and seek compensation for your losses.

When will settlements be paid?

Settlement proceedings are unlikely to commence for another couple of years. Assuming that uloric claims are merged into an MDL shortly, at least a year before the first few cases — known as “bellwether trials” — go to trial.

The outcome of these bellwether cases will determine the final settlement amounts. If Takeda loses and is forced to pay substantial punitive damages, the remaining plaintiffs will be relieved. Takeda may then offer considerable compensation in return for the action being dropped.

When seeking a settlement, the plaintiffs’ attorneys seek compensation for the following:

If the uloric user died, the victim’s family could also seek compensation for funeral expenses and loss of support.

Uloric cases are still in their early stages. No large settlements have been reported, and no cases have gone to trial.

The lawsuits allege that Takeda neglected to notify patients about potentially fatal adverse effects, including heart attack, stroke, and heart-related deaths. Deep vein thrombosis, angina, and pulmonary embolism are some cardiovascular problems likely to be cited in litigation.

Because so many patients taking medicine before the warnings were put on the label, there might be hundreds or even thousands of lawsuits.

These plaintiffs argue that Takeda neglected to tell doctors and patients about the cardiovascular risks linked with the prescription gout medicine uloric and even took measures to conceal the risk. uloric allegations have not yet been merged into a mass tort or class action.

Am I eligible to file an uloric lawsuit?

You could be eligible for a uloric lawsuit if you or a loved one was given uloric for hyperuricemia or gout and later discovered to have a cardiovascular condition or other significant problems.

Review your medical records thoroughly before filing an uloric lawsuit since they will prove the effects of the medication on your illness.

For more details on litigation related to the uloric lawsuit, visit our webpage at medlegal360. Do not forget to leave your feedback on this blog.