Cartiva Implant Lawsuits: Keep the Manufacturers up the Creek 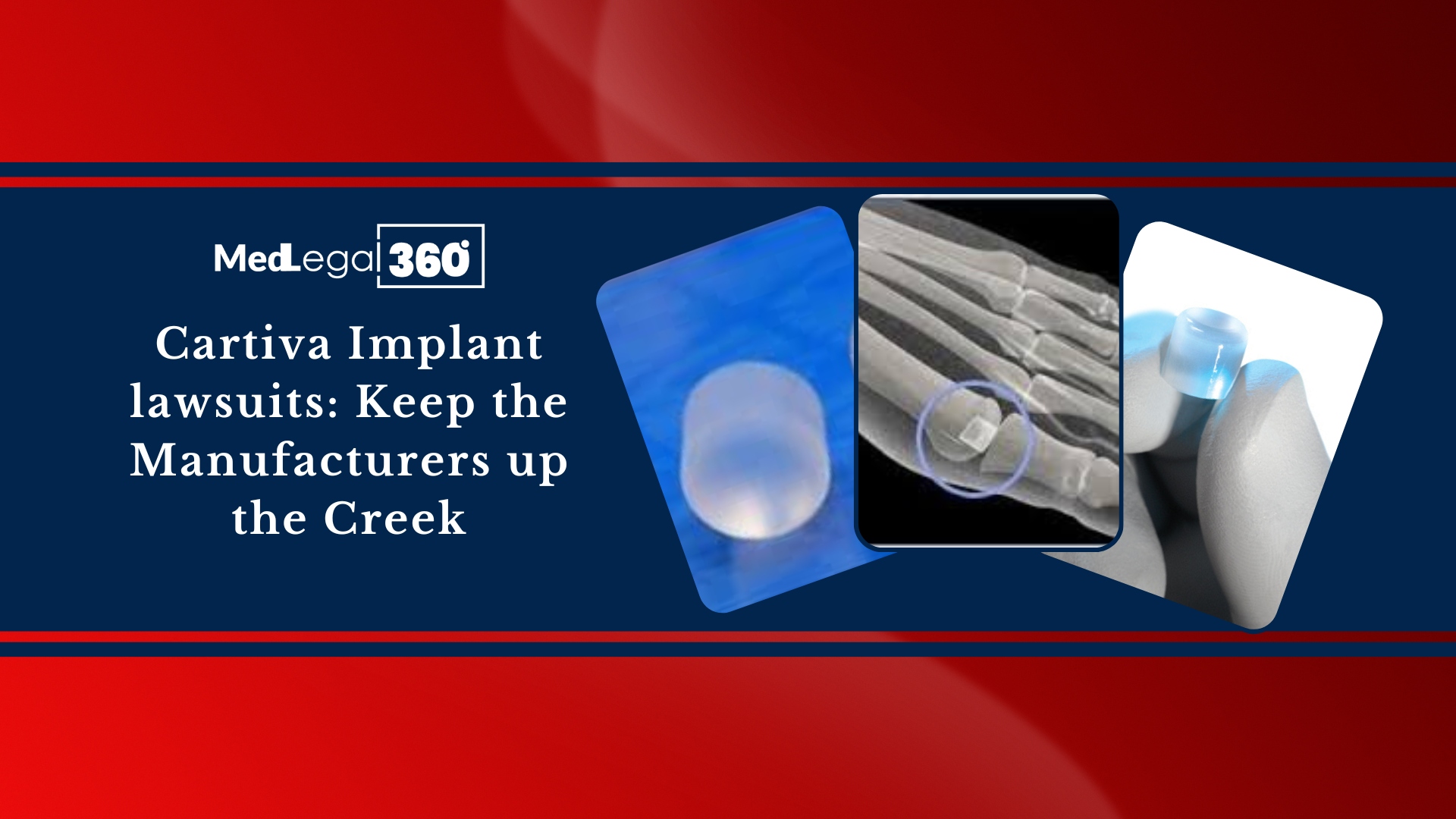 Did you know that your big toe bears twice as much weight as the rest of your toes?

The “big” toe has a significant role in propulsion and stress absorption. Whether to run or walk, your big toe should be in good shape and condition. It maintains the balance of your body.

Like every other part of the body, the big toe can also be affected by arthritis, and the solution many physicians found earlier was toe fusion surgery. The fusion makes the joint stiff and results in reduced mobility.

The invention of the Cartiva toe implant, which enabled smooth joint movement, provided a fantastic resolution. However, clinicians and patients started detecting implant failure and other toe problems immediately after the use of this implant. This resulted in Cartiva implant lawsuits.

Anatomy of the Big Toe Joint

The region covering MTP and IP joints is called the plantar complex, which resists the dorsiflexion at the MTP joint.

Degenerative arthritis in the MTP joint makes the base of the big toe stiff (hallux rigidus), and this limits the movement of the great toe (hallux limitus) painful and difficult.

This condition is mainly seen in people from 30 to 60 years of age. One in forty people tends to be affected by big toe arthritis. Toe fusion surgery done in such people will make them difficult to walk or run as the immovable metatarsal joint suspends flexibility.

The Cartiva synthetic cartilage implant is a tiny cylindrical gel-like plug that is placed between the two sides of the arthritic joint to provide a sturdy, low-friction surface for the big toe to move on with less discomfort. This polyvinyl alcohol (PVA) and saline combination implant material has qualities similar to genuine cartilage and replaces a portion of the injured cartilage in the toe joint.

In 2015, this innovative brainchild, manufactured by Cartiva, Inc., came as an alternative to toe fusion surgery. The Cartiva® SCI device got the Food and Drug Administration’s 510(K) premarket approval in 2016.

Later Cartiva was acquired by its competitor, Wright Medical Group (2018), for a $435 million deal.

In 2020, Stryker, an international medical device and healthcare product company from Michigan, acquired Wright Medical by closing the deal for $4 billion. Stryker is manufacturing and marketing the product until the present. 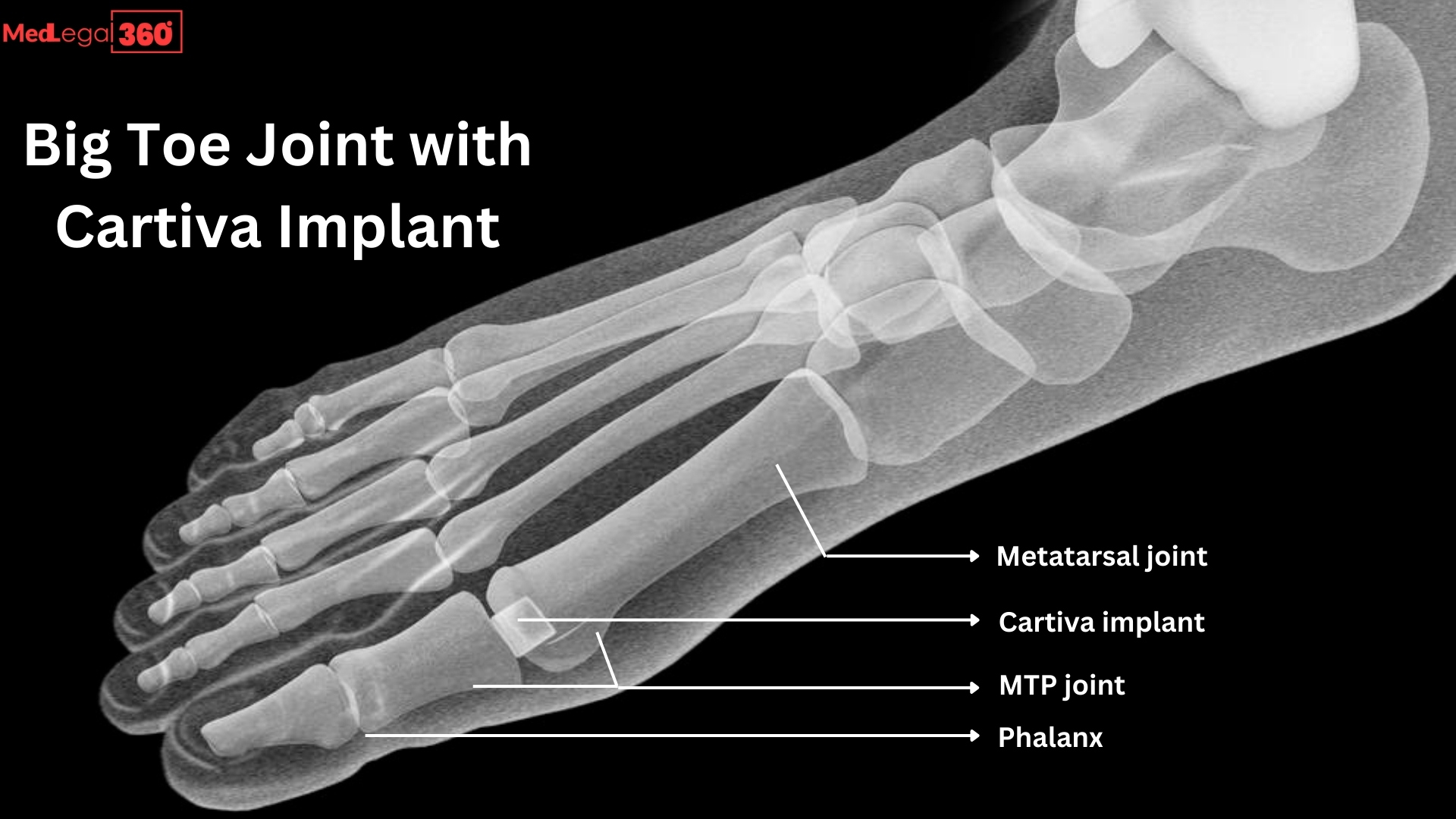 When Cartiva was approved, it was based on clinical trials that proved only a 13.5 percent chance of failure. However, later studies established that the failure rate could go up higher than 13.5%.

In November 2020, a study by the American Orthopedic Foot and Ankle Society reported that more than 64 percent of people who got Cartiva implants underwent device failure within the first month after the surgery.

Among all the adverse event reports received by the FDA regarding big toe implants from 2010 to 2018, 23.4% were related to Cartiva implants. This truth was revealed by the study published by the Journal of Foot and Ankle Surgery.

In the first few years after its introduction as an alternative to treat arthrodesis, Cartiva implants started facing complaints from patients. The patients experienced increased toe pain, loosening of the implant due to its shrinkage, and fracture when the implant sank into the bone (subsidence).

Initially, researchers from the University Foot and Ankle Institute claimed that the Cartiva implants provided long-term results with no functional limitations. The Cartiva implant success rate was projected as more than 90% of patients reported a significant reduction in pain, durability, and satisfaction.

Dr. Bob Baravarian was one of the leading researchers from the University Foot and Ankle Institute who helped the launch of the implant.

Later, on getting complaints from people of the implant failure, he alerted the manufacturers of the issues to look into it. However, they were only eager to quote the studies that reinforced its safety. They did not pay heed to the issues or take steps to resolve them.

Dr. Bavarian found that the implants were not damaged during the revision surgeries. He speculated that the Cartiva implant failures might be related to its faulty design. The device had a smooth surface that could not hold onto the surrounding bone. It could have remained in place if it had at least some irregularity to prevent the slippage.

Prior to the implant, this water-based implant is soaked in a water medium. Once implanted, it must be kept hydrated in order to function properly. Because the joint surrounding the implant is dehydrated due to arthritis, the implant also loses its hydration. As a result of this, the implant shrinks and caves into the bone.

One more important thing to be noted was that the surrounding bone also would be too weak to support the gel-like implant. It was also not clear the amount of force that could be applied to the Cartiva implant.

Since the adverse effects started surfacing, many surgeons backed out from recommending or using the Cartiva implants.

The issues noted by the patients in the 144 plus adverse event reports were as follows:

The Cartiva implant failure results in extreme pain and discomfort while walking and necessitates revision surgeries.

A joint replacement surgery after removing the failed implant is not that beneficial for the patient. A joint replacement needs the removal of part of the bone. This will reduce the length of the big toe, making it shorter than the other toes. Having shortened big toes affects the body’s balance.

After the joint replacement surgery, the big toe sticks up without touching the ground, and it would be painful.

Cathy Atkinson from Texas filed her Cartiva implant lawsuit in October 2022, alleging that her toe implant did not resolve her pain issues. She received her Cartiva toe implant in November 2018, which did not improve her range of motion. She had to undergo more painful revision surgeries to remove the implant (December 2020) and revise the bone loss caused by the implant (arthrodesis fusion surgery in 2021).

Plaintiff Gabriel Gesmer had undergone two implant surgeries and encountered swelling, nerve damage, loss of mobility, and bone loss as a result of that. His lawsuit claimed that the makers knew that their products “were unreasonably dangerous due to non-compliance.”

His lawsuit also alleged that the manufacturers marketed a “defective and adulterated” device that led to his suffering.

Plaintiff Sally Peterson received a toe implant in January 2018. Her lawsuit alleged that she “experienced the loss of mobility, nerve damage, and debilitating pain of the Left great toe, along with constant irritation and discomfort in the location of the artificial Cartiva device.”

She underwent additional implant removal surgery and further treatments and pain and suffering. Her Cartiva implant lawsuit blamed that “defendants incorrectly stated in the updated label that 9.2% of Cartiva subjects and 12% of fusion subjects had the implant and/or hardware removed during the course of the study.”

Attorney Milberg Coleman Bryson Phillips Grossman filed a Cartiva implant lawsuit on behalf of the plaintiff Gina Neil. Another lawsuit was filed by Tammie Thompson in March 2022, alleging the Cartiva toe implant failure led to her pain and suffering. Details of these two lawsuits are not available yet.

The lawsuit information center notes that around 5 Cartiva implant lawsuits were filed until the present in 2022. Ms. Atkinson’s case was one among them. The particulars of the lawsuits are: 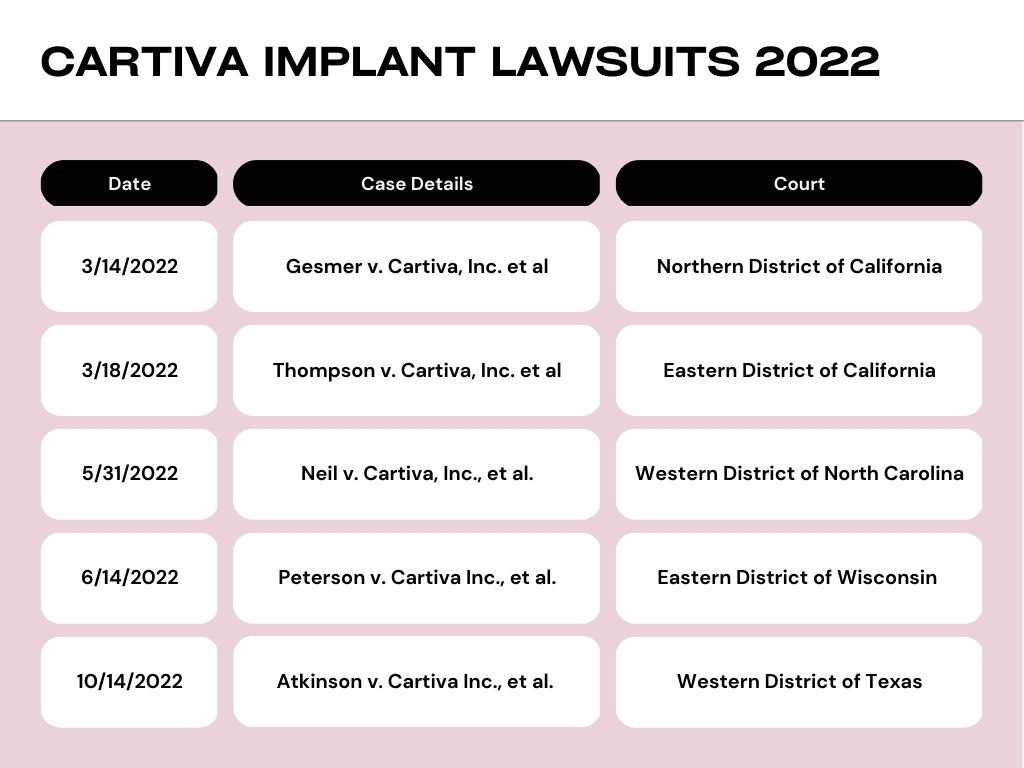 It is said that four cases other than Ms. Atkinson’s were dismissed in September 2022. Attorneys speculate that those four Cartiva implant lawsuits might have been resolved out of court.

Many other patients affected by Cartiva toe joint implants have started filing Cartiva implant lawsuits across the country. When these lawsuits grow into a huge volume, there are chances for being consolidated into MDLs. There has not yet been a Cartiva class action lawsuit filed.

The lawsuits filed in California accused the defendants had known the design defect from the affected people’s adverse event reports but withheld the information from the medical community.

Do I Qualify to File a Cartiva lawsuit?

Your qualifications to pursue a Cartiva implant lawsuit includes the following:

Contact an experienced Cartiva lawsuit attorney to shoulder your claim if you or your loved one is affected by a Cartiva implant failure.

Bolster Up Your Claim

Your medical records should have documented the diagnosis and progression of your toe arthritis in detail. The date and specifics of your Cartiva implant operation, any difficulties, pain and suffering you had, as well as any revision procedures and additional therapy, will all be important factors in determining whether you receive compensation.

Strong examinations of your medical records can resuscitate your claims and help your Cartiva implant case reach a successful conclusion.

LezDo TechMed has years of stewardship in bolstering product liability claims with fact-oriented medical record reviews. Upload your records to them, and they will dig up the strengths and weaknesses of your claim in a breeze.

Lawsuits involving Cartiva implants are still in their infancy. Lawyers anticipate that Cartiva litigation may begin to inflate in the U.S. courts fairly soon.

All around the nation, a lot of Cartiva implant lawyers have started taking cases. To advance your claim, seek the advice of a qualified attorney.

You can see the gist of the Cartiva lawsuits from our pin: