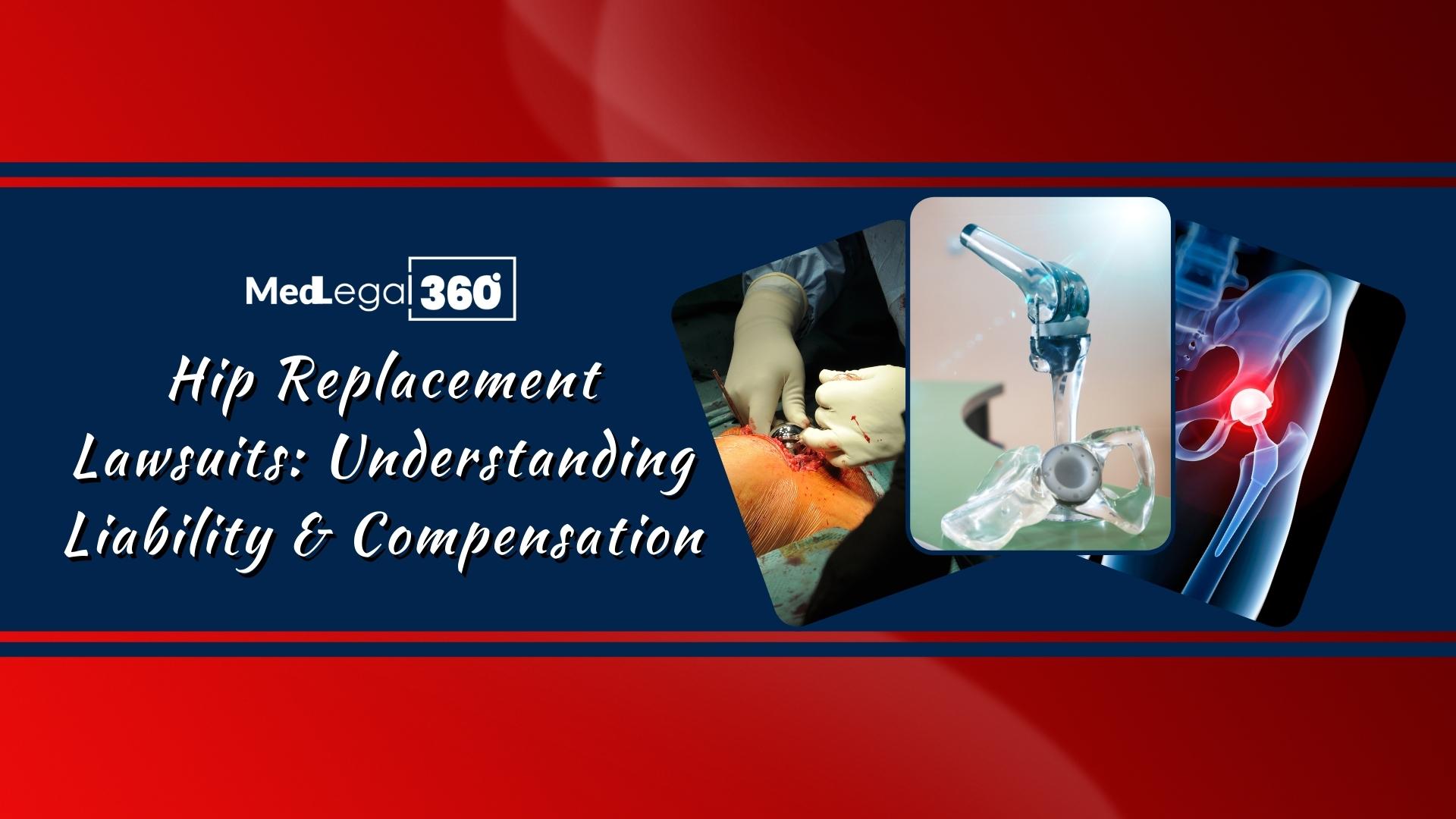 Hip manufacturing companies have settled billions of hip replacement cases during the past 20 years. These cases frequently center on metal-on-metal hip replacement implants, widely used in the 2000s before physicians and patients became aware of the risks. If one of these medical devices harmed you and needed revision surgery, you could be entitled to compensation.

What is the Surgery for a Hip Replacement?

Hip replacement surgery becomes an option when a patient has difficulty during everyday activities and while at rest. Doctors have suggested this kind of surgery when extended medicine no longer works.

Implants are now more efficient because of advancements in medical technology and surgery. More than 300,000 hip replacement procedures are carried out in the U.S. annually.

Numerous patients have filed hip replacement lawsuits against the producers and distributors of hip implants due to revision surgeries.

Why were hip replacements performed on patients?

Hip replacement surgery can reduce strain and restore mobility when a hip joint has worn out due to misuse, aging, accidents, or medical conditions by replacing worn-out bone and tissue with artificial replacement parts. A few common reasons for hip surgery include:

The Risks of Hip Replacements

Studies have shown that the metal fragments from this hip replacement can damage the surrounding bone, muscle, and tissue. Even worse, the metal fragments may enter the body and harm internal organs, leading to hearing loss, vision problems, heart troubles, and other serious side effects.

Many patients have had various adverse side effects after getting metal-on-metal components in hip replacement systems, prompting them to pursue claims against the manufacturers.

We’ve been looking at in vivo sensing in a total hip replacement – smart implants that tell you about problems are coming…. @DrRobKay@PeteCulmer
@sophie__w
@iMBE_Leeds
@wrightington16 @IOPscience
https://t.co/XfqGgicGtH pic.twitter.com/3xvSEXzI5z

Many international manufacturers have recalled their hip implant devices due to rising metallosis cases and high rates of hip surgery failure. Numerous hip replacement lawsuits, including individual and class actions, were brought. The firms are:

Sometimes, items reach the market before undergoing the necessary FDA testing. This procedure is called the 510(K) Premarket Notification Process. A company may sell a substantially comparable product that hasn’t yet been evaluated if it has submitted a product to the FDA and gotten clearance to sell it. In one crucial way, defects may be overlooked by the general public until it is too late.

Manufacturers must design products that function safely. They must convey clear instructions and warnings about potential risks to end users. Customers can file hip replacement lawsuits for everything from lost pay to the cost of further procedures if companies fail to do so.

The metal-on-metal (MoM) design of the DePuy Pinnacle hip implant, first made available in 2002, was designed to reduce “wear and tear” and make it more resilient and long-lasting than previous implants. Unfortunately, many patients who received MoM hip implant devices experienced severe consequences.

DePuy, a division of Johnson & Johnson, is one of the most well-known companies engaged in hip replacement lawsuits. Due to their metal-on-metal structure, DePuy implants have a relatively high failure rate and a rate of adverse effects.

Two of the hip replacement items made by Stryker have been recalled. The company started the hip replacement parts recall shortly after alerting medical professionals to an elevated risk of metallosis, tissue death, and other problems that would necessitate revision surgery.

Zimmer Holdings purchased Biomet Inc. in 2015. The company develops a metal-on-metal component known as the M2a that may be utilized with various products. Biomet and Zimmer joined, creating the third-largest orthopedic device manufacturer worldwide.

The Durom Acetabular Component, a metal hip socket manufactured by Zimmer, is the subject of legal action. Instead of cement, this device uses a plasma coating to assist and encourage bone formation. However, many patients have experienced severe pain when the implant loosens due to the implant not correctly fusing to the bone.

Many surgeons have turned away from Zimmer’s products since they sometimes fail to connect with a patient’s host bone adequately. To change the instructions given to surgeons, Zimmer started a recall of the devices in 2008.

An appeal by Zimmer Biomet to request a new trial following a $3.5 million hip implant lawsuit judgment was rejected by the U.S. Court of Appeals.

According to cases previously brought against Smith & Nephew, the device’s flawed design caused significant issues for hip replacement patients. The implants were metal-on-metal, which means that a person’s damaged hip joint is replaced by inserting a metal ball into a metal socket.

Recent studies, however, have shown that they can mitigate the continual wear and system failure brought on by these two metal parts grinding against one another.

In June 2012, Smith & Nephew began to recall the metal liner part of its modular R3 Acetabular Hip Replacement System. Patients with this component implanted might be more likely to need revision surgery. The Smith & Nephew complaints were combined into one case by the U.S. Judicial Panel on Multidistrict Litigation in 2017.

In 2009, the Wright Profemur System was introduced to the market, and statistics showed that the system had an above-average failure rate only three years after surgery. Many Wright hip replacement patients have had discomfort due to metal-on-metal friction and metal poisoning.

The cases allege injuries and other consequences connected to metallosis. The settlements covered people whose lawsuits were still pending at the time. Additionally, they had to have undergone corrective surgery within eight years of getting the bad hip implant.

Wright Medical resolved hundreds of cases over their hip-replacement implants by agreeing to two settlements totaling $330 million. Following the agreement, a federal judge ended the multidistrict case against Wright in June 2018. The firm no longer produces hip implants.

Courts are beginning to create multi-district cases even though there aren’t any class-action lawsuits pending for MoM hip replacements. Stryker reached a $1 billion settlement with the victims of two of its recalled devices in 2014.

A court determined that plaintiffs had been harmed by DePuy’s faulty equipment two years later, and DePuy (Johnson & Johnson) made a $1 billion payment to patients and their families. More hip replacement litigation cases are in progress, leading to the hip replacement manufacturers paying substantial compensation settlements.

MDL, or multidistrict litigation, is a procedure that unites at least two manufacturers and enables hundreds or even thousands of comparable plaintiffs from several federal districts to proceed swiftly through the legal system. MDL prevents courts from hearing and rehearing the same case repeatedly when so many plaintiffs whose allegations appear nearly identical. They’re still in the beginning phases.

It’s one thing to undergo surgery to treat a problematic ailment and still feel pain afterward, even though the problem has been resolved. Extensive hip replacement procedures frequently use metal-on-metal construction.

The following difficulties, issues, and impacts are the most frequent causes of legal action against these surgeons and medical device manufacturers:

Hip Replacement Lawsuits filed against the manufacturers allege that the businesses produced faulty products, failed to adequately warn patients and the public about the risks of the products, and actively promoted their products, with many of the businesses being accused of paying physicians to use their products. For this kind of situation, there are several class action lawsuits.

Who Can File Hip Replacement lawsuits?

The patient is qualified to request claims and hip replacement recall compensation if the FDA or the maker has issued a recall for the product or implant used in the treatment. It may be possible to receive compensation for people who endured excruciating pain, had hip device failure, needed hip revision surgery, or became ill due to metal ion poisoning from a hip replacement device.

To proceed with a bad hip replacement lawsuit, the claimant must establish that the hip replacement surgery is to blame for any harm, as well as for any side effects and other difficulties. Patients are still eligible to submit a claim even if the adverse effects weren’t immediately noticeable, and the manufacturer or its suppliers will then further investigate it.

Participating in recall campaigns could also make it harder to pursue additional damages. Be aware that specific guidelines exist for seeking and filing claims in each state.

A specific period is also given for bringing a lawsuit hip replacement. The statute of limitations also applies to this. Every patient must understand this provision. Contact a lawyer to assist you with preparing what you need to win the claim so that you may make the most of the time and begin processing claims.

You might be able to determine if you have a strong case by reviewing your medical records. LezDo techmed is equipped to do a medical record review in every state and would be honored to help you find comfort in this stressful undertaking.

The time to file a defective hip replacement lawsuit for harm brought on by a faulty product is limited. Get more information right away because waiting might harm your case. These hip implants have caused issues for several people, who still suffer today. It’s essential to make an effort to hold the manufacturer responsible for their negligence and obtain compensation for the losses you suffered.