How to manage a broken fibula? Everything about treatment and healing 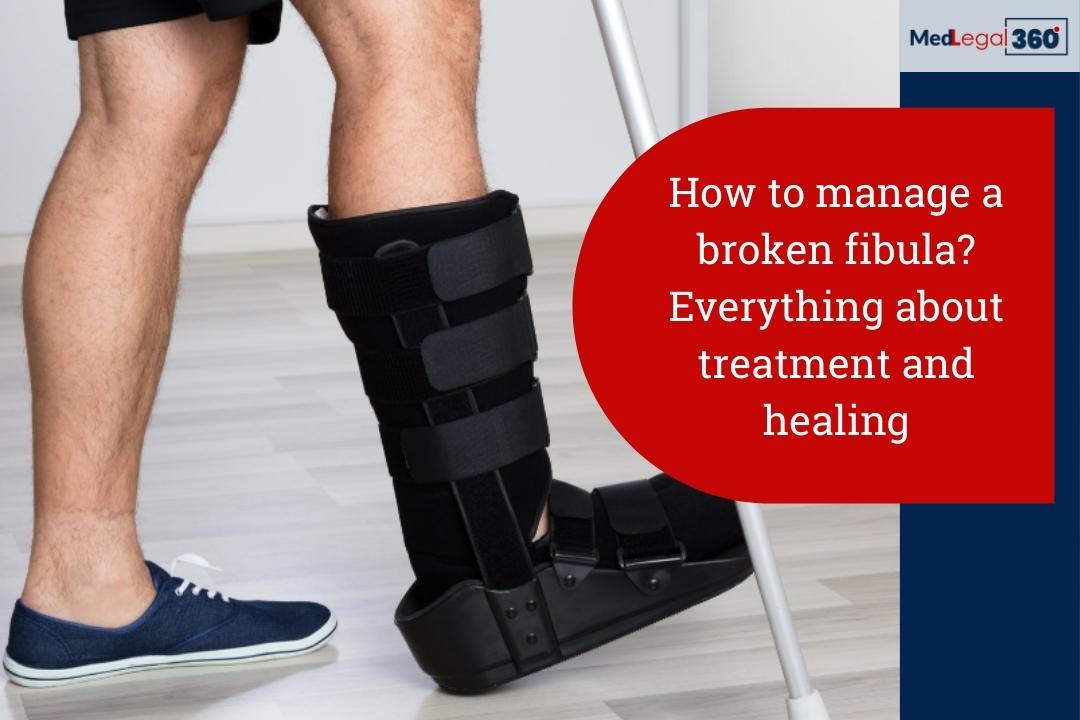 “Don’t judge a person’s worth by size” is an apt proverb to describe the function of the fibular bone. The fibula is the calf bone that sits beneath the tibia (shin bone) and succors it in weight-bearing. This thin bone aids in stabilizing the lower leg and improving the ankle’s range of motion. Though it plays little role in weight-bearing, a broken fibula is enough to keep you away from work and daily activities for weeks or months.

This article introduces you to the anatomy of the fibula, the management of a broken fibula after an accident, and how to secure well-deserved compensation.

Anatomy and Function of Fibula 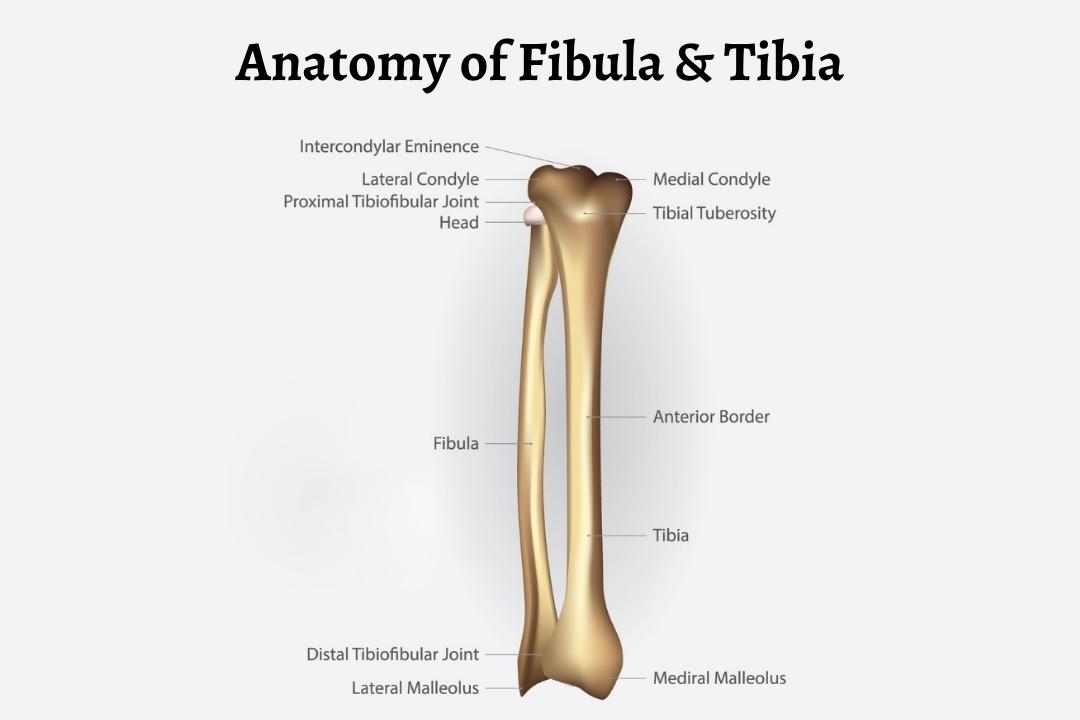 The fibula is a twin bone to the tibia but much smaller. Unlike the tibia, it is not attached to the knee joint, and ligaments connect it to the tibial head. The lower end of the fibula (lateral malleolus) has an indentation for many ligaments to attach to the distal talofibular joint, and it, along with the tibia, provides stability to the lower leg. It makes the ankle movements more fluid.

Because the tibia bears the majority of the weight of the human body, the fibula is used as a bone donor site for bone grafts in other parts of the body when needed. The fibular artery or peroneal artery supplies blood to the diaphysis of the fibula.

The other fractures include

Fibula fractures typically occur due to low-impact accidents such as a slip and fall on the ground or minor sprains suffered by athletes. When the fibula is subjected to more stress than it can withstand, it can result in a hairline or complete fracture.

Ankle sprains and minor blows to the ankle can result in broken fibulas. Excessive stress on the lower leg, such as in football, lacrosse or soccer, leads to fractures. Between 2000 and 2014, the National Football League recorded approximately 16 broken fibula incidents during each NFL sporting season. Playing basketball or skiing also can cause fibula fractures.

The symptoms of a broken fibula include 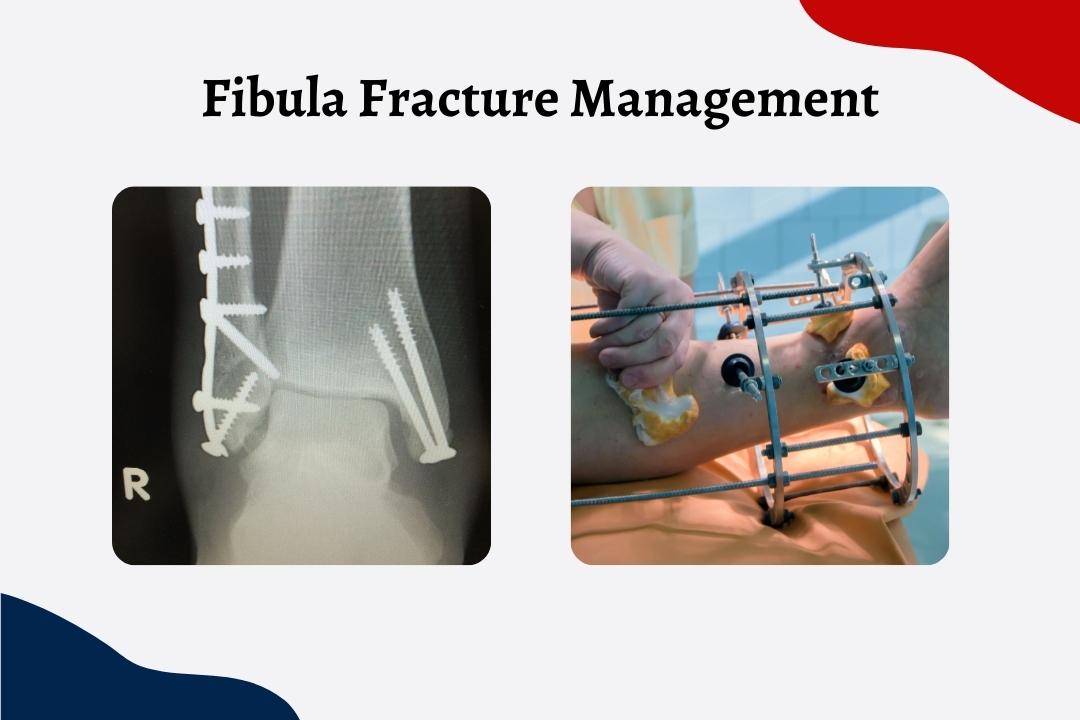 In case of a broken fibula shaft, the bone will be snapped in place, and a splint or cast will be given for the bone to heal properly. The treatment and healing will be easy since the fibular head and lateral malleolus are intact. If the two ends are only displaced due to the impact, they can be put back into position. As this does not need an incision, it is called a closed reduction.

Can you walk on a fractured fibula? Since the fibula plays little role in weight-bearing, your doctors may allow you to walk while you recoup from the hairline fracture fibula injury. Because of the fibula’s role in ankle stability, you can use crutches or walkers to avoid putting weight on the leg until the bone heals.

If the fractured fibula has broken through the skin, resulting in an open wound, ORIF surgery should be performed as soon as possible to avoid infection. The RICE principle (rest, ice, compression, and elevation) should be followed. Metal implants will be required to repair the shattered fibula. In severe cases, metal screws and rods will be placed outside the skin to keep the broken bone in place. Percutaneous pinning will be done using wires across the fractured bones to keep them in place until it is healed. It will be removed after the healing of the fibula.

As we have seen, the tibia and fibula work together to give stability. In many cases, both bones can fracture together. In a broken fibula and tibia surgery, depending on the seriousness of the fracture, closed reduction, open reduction, internal fixation, external fixation, or percutaneous pinning will be used to treat. Anyone or a combination of these methods can be effective in fractured fibula recovery.

Physical therapy would be needed to ensure flexibility of the joints after being immobilized for some time. Walking with care and exercise to the ankle joint will smooth the ankle’s range of motion. For the distal fibula fracture recovery, complete rest during the recovery would be beneficial. The broken fibula treatment will not be complete without the active compliance of rest from the patient.

The majority of fibula fractures will heal without major complications. However, certain circumstances make healing risky. The risks will vary depending on the age, severity of the injury, and health conditions such as diabetes.

In contrast to the tibia, a broken fibula recovery time will be one to two months if there are no complications. Because the fibula does not bear much weight, healing will be simple. Immobilization of the injured leg during recovery and the use of crutches for leg support will indeed improve healing. When pressure or weight is applied to the leg, the fibula hairline fracture may become worse and make the fibula break and get misaligned and deformed as it heals, and it may extend the broken fibula surgery recovery time. Because the tibia is the weight-bearing bone, the broken fibula and tibia recovery time will be longer.

A nondisplaced fibula fracture recovery time will be normally 6 to 8 weeks.

What is the fastest way to heal a broken fibula? If rest was guaranteed, the fractured fibula and tibia recovery would be complete in one to three months. It tells that the distal fibula fracture healing time depends on how you take care of yourself.

How long to walk normally after a broken fibula? Depending on the type and severity of your fibula fracture, it can take weeks or months for the fractured fibula recovery time and start walking.

What to do After Fibula Fractures

Accidents are unavoidable in our lives. Even if we are cautious, it cannot be avoided entirely. Never panic if you have a fibula fracture from a slip and fall or a car accident. If you suspect a broken fibula, avoid putting additional strain on the injured leg. This will keep the fracture from worsening. Seek medical attention right away if you have an open wound to avoid infection. Keeping the wound clean and following the RICE (Rest, Ice, Compression and Elevation) principle will hasten your recovery.

Collect evidence, such as photos or videos of your injury, the accident site, and the cause of your injury. Gather any witness statements to bolster your case. In auto, pedestrian, or bicycle accidents, collect information about the defendant driver.

Never make any statements to the other party or their insurance company. To file a lawsuit, seek the advice of a fibula fracture injury attorney. Allow your attorney to advocate the issue effectively. Handle all evidence and medical records with care because they are the foundations of your claim.

Though broken bones are common in slip and fall accidents or car accidents, they are enough to keep you from working for a while. If someone else’s negligence caused your injury, you have every right to file a lawsuit against the defendant. The pain and suffering you have endured, as well as the treatment costs, lost wages, extensive surgery costs, rehabilitation costs, loss of social enjoyment, and so on, are all recoverable.

The average broken fibula settlement ranges between $75,000 and $90,000. Compensation will vary depending on the other injuries sustained, the severity of the injuries, the extent of damages incurred, extensive surgeries done, and the length of recovery time. A femur fracture, along with this, may double the settlement as it is the strongest bone in the body.

An experienced broken fibula lawyer can assess your damages, write an effective demand letter to the defendant’s insurance company, and negotiate the compensation you deserve. If they refuse to settle your claim despite all of the compelling evidence, you can take them to court.

A 45-year-old woman was injured when her motorcycle was struck by a truck. She sustained a hip dislocation, a broken fibula, and a tibia on the right side, as well as soft tissue injuries. She was unable to work for an extended period due to her immobility during her recovery. She required assistance with her daily basic body functions due to her ongoing pain. Her tragic accident prompted her to seek PTSD treatment. She was awarded $100,000 for a broken tibia and fibula compensation and for her pain and suffering, as well as her accumulated expenses.

A 17-year-old boy went to a nearby cycle repair shop to have his bike repaired. On his way back, a bus unexpectedly came in the opposite direction and in the wrong lane in a curve. Despite applying brakes to the cycle, they did not work, and the boy was thrown in front of the bus. The boy suffered a distal fibula fracture, a tibia fracture, and an ankle dislocation. His fibula and tibia were shattered, necessitating extensive surgery. The cycle repair shop and the bus driver had to pay the boy $1025,000 as broken fibula compensation.

A broken fibula compensation amount of $130,000 was awarded to a 50-year-old man for his lateral malleolus and tibial shaft fractures. He was a pedestrian who was struck by a careless and inebriated driver at an intersection. His injuries necessitated additional surgeries because they triggered osteoarthritis in his ankle joints.

A 30-year-old man fell 15 feet from a ladder in a construction accident and suffered broken hips and multiple fractures in his left tibia and fibula. His fractured fibula treatment included ORIF surgery, and he needed crutches for over six months. His recovery from a broken fibula and other injuries forced him to miss more than six months of work. He was diagnosed with a permanent disability, which eliminated his chances of being promoted to a higher-paying position. The jury awarded him $1075,000 in damages as recompense for his losses.

A broken fibula injury is not something you can brush away as less serious. Getting appropriate treatment on time can save you from unnecessary infections and extend recovery time. Carelessness and delay in treatment aggravate your injury and create credibility issues regarding the seriousness of your broken fibula at the time of trial.

You can definitely claim for your fibula fracture embanking on the pieces of evidence for the defendant’s negligence. With all the medical documents, evidence, witness statements, and an experienced attorney on your side, you can easily tackle the powerful insurance giants to get your average settlement for a broken fibula.

The way the researchers understand is from every nuance of the ordinary. Being professionals in medlegal we need to comprehend it efficiently with simple language.
How to manage a broken fibula is tough to research however, medlegal will help you greatly.