Prescription drugs addiction and DUI: All you have to know 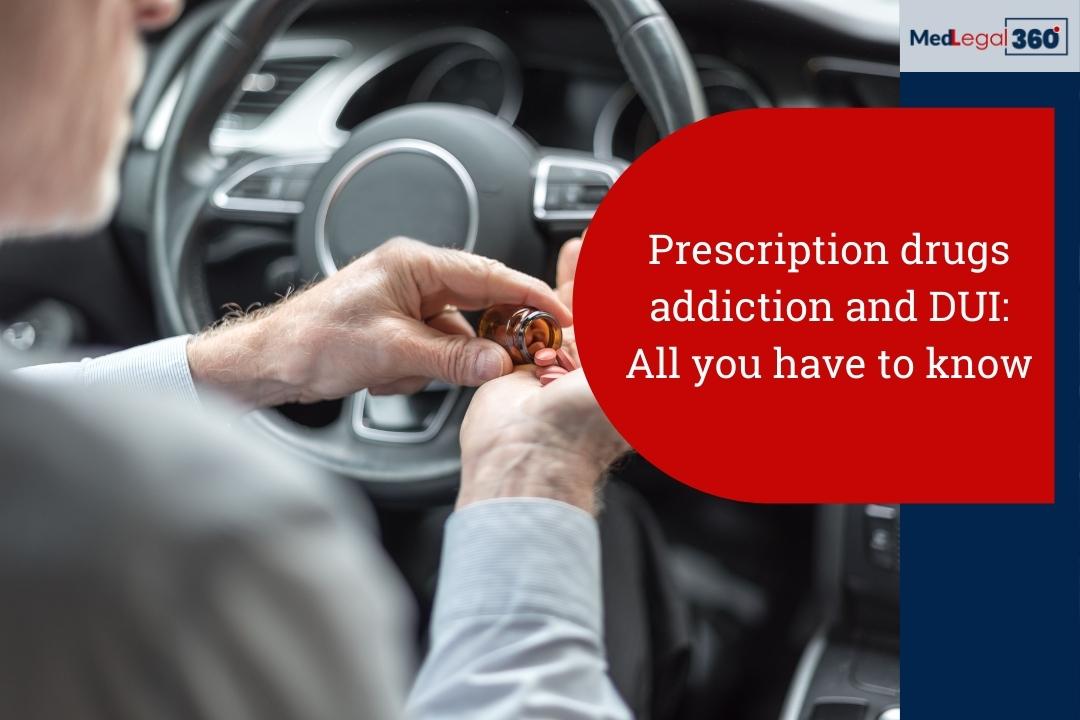 People were buying prescription drugs online in massive numbers as a result of the pandemic. Physicians used to prescribe drugs to patients after learning about their health conditions, other medications they were taking, allergies, and previous medical history. When you order prescription drugs online, the pharmacist on the other end is unfamiliar with your medical history. Do you believe he/she can provide you with a safe prescription that is appropriate for your health?

Consider what would happen if you used prescription drugs without consulting your doctor. A prescription drug is a two-edged sword. Your health problem will be resolved only if you take medicine as per the doctor’s advice. Taking it without understanding its usage and side effects can cause severe harm, permanently disable you, or even cost your life.

What are Prescription Drugs?

The pharmaceutical drugs that can only be obtained through a medical prescription at the dispensaries or pharmacies are called prescription drugs. Opioids, depressants, and stimulants were among the prescription drugs used to treat pain, insomnia, and attention deficit hyperactivity disorder (ADHD).

What is Prescription Drug Abuse?

The period from March 2020 to March 2021 had found around 97,000 drug overdose deaths, which was 36.1% higher than the previous year. Many youngsters are addicted to prescription drugs for various reasons. Annually more than 12 youngsters out of 100,000 from the age of 15 to 24 years die due to overdose. Opioids are causing 71.76% of all overdose deaths. Prescription drug overdose is the second leading cause of death, followed by diabetes in America.

Research has shown that youngsters from 18 and 25 years are the ones who most abused prescription drugs. Around 30 percent of people who take prescription opioids for chronic pain tend to misuse them. Many of the prescription stimulant abusers began that while in college. Around 80% of heroin users became addicted to prescription opioid abuse in the beginning.

Listen to what Mayo clinic has to tell you on prescription drug addiction.

Side Effects of Prescription Drugs Addiction/Abuse

The common prescription drugs effects are as follows:

How to Prevent Prescription Drugs Addiction?

If you want to stay away from prescription drugs addiction, always try to get the drugs from your physician after consultation. Always follow the instructions for use. Never use a prescription for anything other than what your doctor has prescribed.

Prescription drugs should only be ordered online if the pharmacy is well-known and reputable. Many cases of unintentional overdose can be traced back to websites posing as pharmacies that fill prescriptions at a steep discount. Many of these drugs are counterfeit and contain lethal doses of a substance that the user is unaware of.

Never, ever sell or give away prescription medications even to your family or friends. Sharing prescriptions is risky as it may end up in death or other consequences like drug abuse. Always dispose of any leftover prescriptions properly. Many pharmacies provide prescription drug destruction and disposal services. Getting prompt treatment on time for prescription drug abuse will save you from shame and failure. Prescription drugs addiction may cause psychologic issues like fear of failure, anxiety issues and depression.

Yes, even prescription drugs, can impact your driving. Do you have severe back pain and took Tylenol? Stay away from driving and better to take rest at home. This is good for your back and protects you from a possible auto accident as well. Some prescription drugs have more sedative power that they can impair the people and dangerous to the drivers who indent to be behind the wheels.

The drugs that can impair driving are as follows:

Do you want to know the side effects of prescription drugs addiction and how it is dangerous to driving? Watch this video.

Can My Prescription Drug Land Me in a DUI Offense?

DUI doesn’t just mean alcohol. A driver can be impaired after consuming legal or illegal drugs too. With prescription drugs, always check with your doctor before operating a vehicle. And obviously never take illegal drugs in the first place, much less drive after doing so. pic.twitter.com/Ww7s2o2BUo

Driving under the influence of prescription drugs also can land you in a serious DUI offense. When you hear the word DUI, if you think it is only related to alcohol or drugs like heroin and cocaine, you are mistaken. A prescription drug DUI is considered a misdemeanor in states like California, Texas, Arizona, Delaware, Georgia, Illinois, Indiana, Iowa, Michigan, Minnesota, Nevada, Ohio, Pennsylvania, Rhode Island, Utah, Virginia and Wisconsin under “per se” laws on DUI.

Some of the prescription drugs could make people dizzy, drowsy, and confused. They could feel blurred vision, shakiness, and be unable to concentrate or react on time under prescription drugs. While behind the wheel the person should be able to focus on various factors to maneuver the vehicle skillfully. It is better to consult the doctor if you could drive while under the drugs prescribed for you. If not, be ready to face the consequences of a possible DUI charge.

Don’t underestimate that you can escape claiming that you have only taken the medication for your pain. Some drugs may end you in DUI charges than if you are under the influence of alcohol. Now think about what will happen if you are under prescription drugs addiction. You cannot be without that drug, and being behind the wheel will put you under more DUI charges each time you drive. Let’s see the punishments you have to face for being under prescription drugs addiction for a DUI.

When you are caught on a prescription drug DUI, you will be asked to undergo a BAC (Blood Alcohol Concentration test) to determine your blood’s drug level. As discussed earlier, some prescription drugs are potent enough to make the breathalyzer beep.

This video will enlighten you on prescription drugs addiction and a possible DUI offense.

Do the Penalties for DUIs Involving Prescription Drugs Differ?

The penalties for DUI charges for prescription drugs are more or less similar to that of drug or alcohol DUI.

If someone were to be convicted of a drug DUI or a prescription drug DUI, regardless of whether having a nonprescribed drug or medicines in their system or medicine that was not taken as prescribed, or whether the conviction was based on the prescription drug impairment, their driver’s license would be cancelled for a year with no ability to get a restricted license. After a year, the person must go through a lot of tests in order to receive his/her driver’s license returned.

What are the Penalties for Prescription Drugs DUI?

Under Arizona Statute A.R.S. 28-1381, impaired driving caused by alcohol, narcotics, poisonous chemicals, vapor-releasing compounds, or any combination of these, if it creates even the slightest degree of driving impairment, it is punishable.

A first-time offender in the absence of aggravating circumstances, a drug DUI charge will be prosecuted as a Class 1 misdemeanor. Prescription medication-impaired driving convictions are regarded similarly as alcohol-related DUI / DWI offenses. Fines, fees, assessments, probation, drug addiction education, counseling, treatment, and other penalties are the consequences.

What to do If Convicted of a Prescription Drug DUI?

If you are charged with being impaired while driving under the influence of prescription drugs, you should consult an attorney to examine the state laws to see if a limited defense for driving while under the influence of prescribed drugs is available in your state. Most states allow this defense as long as you have a valid prescription and you’ve taken the medication exactly as prescribed. In determining whether this defense is appropriate, your doctor’s instructions as well as the type of drug, would be of vital importance. However, knowing the drowsy nature of the prescription drug, if you took the car out for a drive, will never save you from penalties.

To wrap up, taking prescription drugs prescribed for someone else, or making it into a powder and snorting it or taking it in more than the prescribed dose, can lead you to a detrimental consequence like prescription drugs addiction. Saving yourself from the lethal drugs would even save you from coma or death. Being charged for multiple felonies for prescription drug DUIs can make your future a question mark, and you have to be behind bars for a long.

Share your thoughts on prescription drugs addiction and its aftermaths, which will be valuable to the general public.

1/5 Do you know, what are called prescription drugs?
They are drugs used to treat pain, insomnia, and attention deficit hyperactivity disorder including opioids, depressants, and stimulants (ADHD).#prescriptiondrugsaddiction #dui #medlegal360